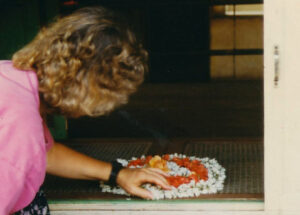 The morning after Sankara’s funeral, we slowly walked the dusty road to the Sankara Mutt (temple) and bought flower garlands from a vender on the corner. The modest cement area where we’d meditated with the sage, where he’d lived and blessed his devotees, and where they held his funeral ritual the day before was quiet and stripped, his meagre ceremonial belongings moved to the new building where they buried his body. 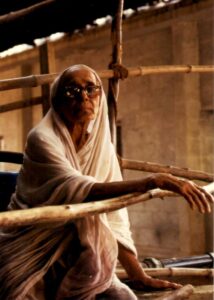 A few of Sri Sankara’s closest disciples sat near an empty palanquin (a small litter) where the sage had slept when on pilgrimage. Sita-Ma, an older women disciple, sat on a cement platform. She and the few other devotees were silent, somber, and grief-stricken.

I made a flower mandala in the palanquin as an offering of gratitude. When the sage was alive, the palanquin was behind the curtain, but the curtain was gone. The litter would soon be moved, too.

“This is the Death of all the Fathers” continued in my thoughts. Even thirty years later, it’s hard to give that symbolic, dream-like experience clear meaning, but it encouraged me to review my life with fathers and father-figures. 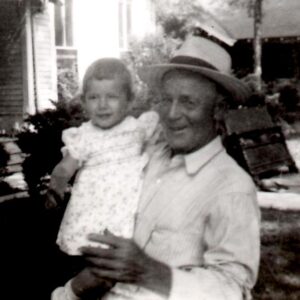 I’d been a daddy’s girl, a grandpa’s girl, and devoted to my older brother. Religion in my childhood was led by men other than the music which was my grandma’s specialty. There was no mention of Biblical women in Sunday School classes, except for a brief appearance of the Virgin Mary as a teenage girl veiled in blue at Christmas. After my father’s death when I was 14, my mother encouraged me to be a scholar and achiever instead of focusing on spirituality or the heart.

At Cornell in the 1960s, all my professors were men—every last one. In 1966, I fell in love with Vic and my first thought when I met him? “He’s just like my father.” Fortunately, we were both interested in Jungian Psychology and working through our parental complexes. 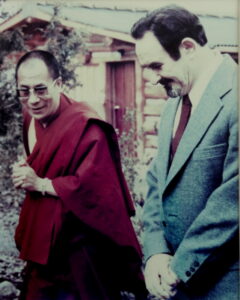 In 1967, my first spiritual teacher Anthony Damiani was a father of six sons and many students, the most vocal predominantly male. Anthony and his oldest son ran a bookstore filled with philosophic books, nearly all written by men. We studied Plotinus and Paul Brunton, Plato and Aurobindo, C.G. Jung and Santayana, Ramana Maharshi and the Dalai Lama, and many more–all teachers I still honor who harmonized with my girlhood prayers to God the Father.

Pondering the symbolic meaning of the “death” of the fathers opened me to an inner birth of the feminine or Divine Mother. I was and am still involved with a group of women studying Goddess mythology and pre-Christian traditions. I made it a priority to get to Canada to workshops with Marion Woodman, a Jungian Therapist who was devoted to the Biblical Sophia and the goal of balancing masculine dominance in western culture with an equally strong feminine focus. Others in my women’s group also attended workshops with Marion or studied her books. 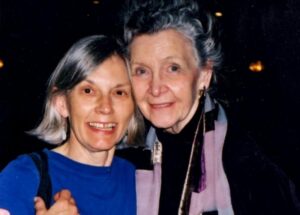 Marion helped me find the Sacred Feminine in Nature, mythology, poetry, art, and body. I’ve learned that Sacred Feminine goes beyond revered teachers and texts. It’s also within me and in life around me. Nature has become my Divine Mother and the forest is my Temple. 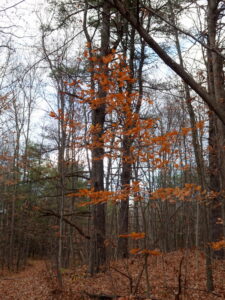 “Conscious femininity is aware
Of the energy in rock, bird, tree, sunset,
Aware of living in the world soul.
The body is attuned, concentrated alive,
Open receptive, alert,
Aware in the marrow
Of the harmony of the universe.”
~ Marion Woodman, Conscious Femininity