Grieving for the Guru (Journey to India, Part 6) 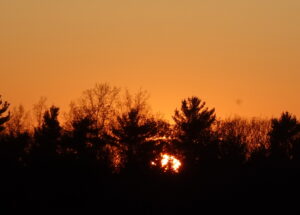 Like so much else in India, Sri Sankaracharya’s  funeral felt dreamlike and foreign, comforting and familiar.

When the main ritual began, priests poured offerings on the sage’s head. His bright silk shrouds were soaked with yogurt, honey, water and herbs, or ghee, one substance at a time. Between each anointing, the curtain closed and, half an hour later, it opened. His body had been cleaned and wrapped in fresh layers of silk. Chanting continued as another offering was poured on his body. Jasmine flowers scented the air. 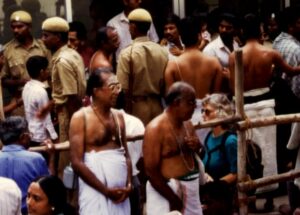 When the curtain closed, hundreds of men and women danced and sang. They wept and sobbed. They prayed and called out his name. “Sankara. Sankara. Guru-ji, Sankara.” 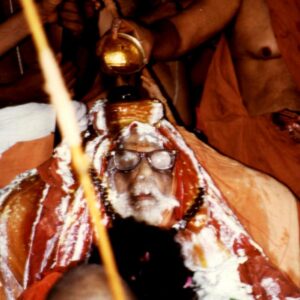 Where had these words come from? What did they mean? They were within me–a gift, a koan, a lucid dream? They continued on in a rhythmic calm voice, neither male nor female.

In the last ritual, ghee rolled down the sage’s dead face, over his glasses, and penetrated the silks. I watched the attendant’s devout grief-stricken faces as they poured yellow oil over their dead teacher before closing the curtain to clean his body. The ritual was a mystery, but their reverence and love were clear.

“This is the death of all the fathers.”

I didn’t try to understand what the words meant, although that would come later. Everything and nothing made sense as the sun sank in the west. 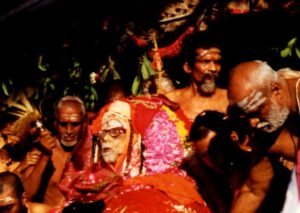 Suddenly, crowds surged toward the sage. Was this part of the plan? The attendants didn’t look alarmed and no one pushed against me, so I stood my ground. The crowd focused on their prayer: “Sankara, Sankara. Jai Sankara, Jai, Jai, Jai Sankara.” Jai or the victory that comes with spiritual liberation.

They carried his body down the mobbed lane to a building prepared for his burial. He was too saintly to be cremated, so the sage who had lived his life in poverty and slept on a thin pallet on a cement or wooden floor was buried in gold, jewels, and salt. 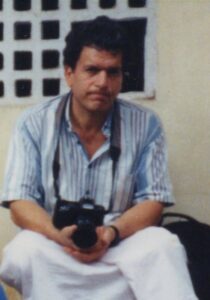 As the crowd moved toward the burial site, Vic appeared beside me. He’d pushed his way through the mob. “Let’s stay here,” he yelled with tears in his eyes.

“Yes,” I said as I sat on the dusty ground and wept.

“This is the death of all the fathers.”

After the burial, Vic and I walked down the quiet lane not sure if we were awake or dreaming. After a day of intense noise and emotion, the Mutt (or Hindu monastery) was quiet and deserted. As the inner mantra continued, all I wanted was water. 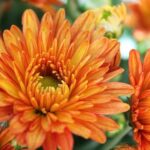 Have you attended an elaborate funeral ritual where no feelings were held back? This funeral was nothing like my Presbyterian childhood or my experiences with family and friends where the memorial is an opportunity to tell stories, listen to music, and describe a person’s life. Sri Sankara’s funeral focused on the ritual and open grief. What have funerals been for you and your family?