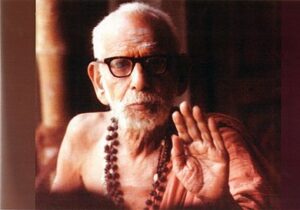 After a late night drive from the Ramana Ashram to Kanchipuram, Vic and I slept late. When we left our hotel in the morning, hundreds of soldiers in tan uniforms blocked traffic near the Mutt. Thousands of people milled around, looking stunned, whispering and weeping. We didn’t know what had happened and couldn’t find anyone who spoke English, so we stood at the end of a line moving toward the Mutt.

We inched forward, until we saw Powar. We’d never seen him on the street with his Indian military uniform. He was always inside guarding the sage in civilian clothes, but now he was helping with crowd control. 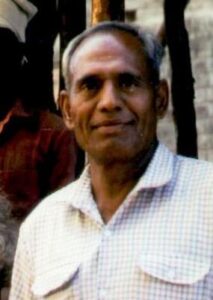 “What happened, Powar?” I asked even though I had guessed the answer. He looked down into my eyes, tears running along the ruts in his face and soaking his jacket.

Powar didn’t hide his grief. No one did. We waited on the dusty street in the sun with the rich and poor, barefoot and gold-sandaled.

“Shoes, please. Shoes here,” the shoe man and his wife called out as we neared the gate. We handed our sandals over, knowing in this huge crowd we’d never see them again. We didn’t care.

The hushed lines of grievers crept down the alley. The concrete platform where we’d sat as quiet meditators was filled with flowers and fruit and men. In the middle, surrounded by his closest male attendants, Sankara was seated in meditation posture on a raised chair. He was dead. 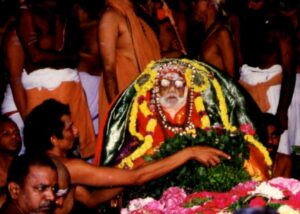 His body was draped in thick layers of colorful gold-threaded silks for which Kanchipuram was world famous. Where was the old sage in his thin cotton saffron robes? Gone.

Vic and I shuffled forward in the line, our hands clasped in prayer over our hearts. To our left, the dead sage and his attendants. To our right, a temporary structure with a high roof to shade members of the temple.

I wanted to stop and spend a few more minutes with the sage, but so did everyone. I kept moving forward, one step at a time, soaking in the sorrow.

A familiar attendant kept the line moving down the alleyway. We made eye contact. He’d seen us waiting and meditating all week and knew us from our two earlier visits. He nodded to Vic and me. We nodded back. Then he beckoned us to come closer and leave the line.

“You stay with us,” he said, pointing toward the shaded area. “Yes, you stay,” he said again when I looked at him with questioning eyes. His eyes were swollen and red, but he was sure. 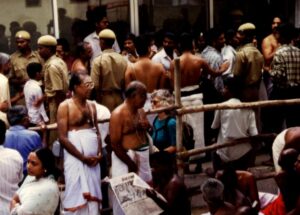 I moved toward a patch of shade above the flow of mourners. Vic pointed to his camera, asking if he could take photos and got a positive nod.

Vic went to the press box, but I stood a few steps above the alleyway with a clear view of Sri Sankara, the funeral ritual, and the lines of people who had come to pay respects.

The dead sage’s body seemed to emanate light, a soft glowing halo. Deep silence filled me as I focused on the Wise One and the stricken faces of his  attendants. I sank deeper into His mystical stillness as the ritual unfolded. 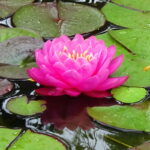 Have you experienced a ritual that changed you deeply? As I watched, I was being taught how to grieve and honor the dead. I didn’t know how important that would become when Vic died. I’ll need one more post to describe the funeral ritual and how being there transformed my spiritual life. The day was punctuated by the arrival of the Prime Minister of India and many other dignitaries, including the temple elephants. The next day we learned there had been 250,000 people there that day. I’m forever grateful we were allowed to stay and witness. Vic took many photos, most of which are still in slide form. (It’s on my list to have them digitalized and someday I will.)