Out of Control, Part 2 (Journey to India) 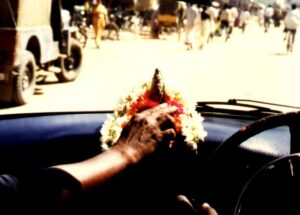 We grabbed our carry-ons and sprinted to the ticket counter. Our plane had just left, but the British Air agent found us seats on a different airline.

“You’d better hurry,” she said. “It boards in a few minutes. Your luggage will be sent to Madras. Run.”

We ran through long gray crowded hallways. My pack smacked against my back with each stride. I was exhausted and weepy and wanted to go home. I suppose I could have surrendered, but I didn’t know how. Vic squeezed my hand as we boarded the flight just before the doors closed. He loved an adventure.

In London, we caught up with our London-Madras (Chennai) flight. As we boarded the plane, I took deep belly breaths to calm down for a 15 hour flight.

The Madras airport was small for a city of four million. We stood at the carousel, listened to the squealing conveyor belt, and watched people grab their luggage. 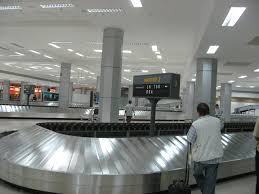 “Our luggage isn’t here,” we told the airport manager.

He smiled and shook his chin side to side in what we came to call the “Tamil Nod.” Was it yes? Was it no? Was it maybe?

“Oh, so sorry,” he said, nodding away. “Your luggage will be on the next flight from London.”

“Friday,” he said with a nod. It was Sunday. No water purification tablets. No summer clothes. No organic dried fruit as a gift for the Hindu sage we’d come to honor. 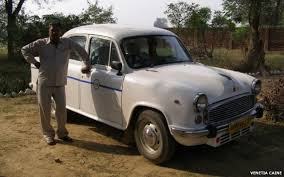 “We have a clothing allowance courtesy of British Air,” the airport manager said with another Tamil nod. We took our rupees and looked for a cab. On the two hour drive from Madras to Kanchipuram, the cab belched smoke and groaned. No seatbelts, of course. The driver had a dashboard altar with a statue and fresh flowers. I hoped his god had power.

Vic was in the front seat, flinching as his body bounced up, down, and sideways. The rest of us cringed in the backseat as the cab swerved around cows, honked at rickshaw drivers, and swung into the on-coming lane, missing approaching cars by inches. 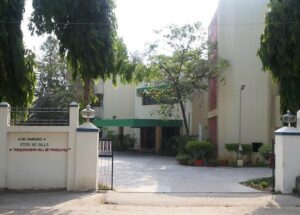 After sunset, we walked into the Tamil Nadu Hotel, shaken, exhausted, and sweating in winter clothes in 90 degree humidity. It was the best hotel in town, but Harriet pointed to the dark streak of men’s hair grease on the wall behind a bench. She grinned.

The man at the desk smiled and gave us the nod and keys. The dark hotel room had windows above eye level, a ceiling fan, and a promising tile bathroom, but nothing happened when we turned the faucet.

“Water will be OK tomorrow,” the clerk said with that reassuring nod. 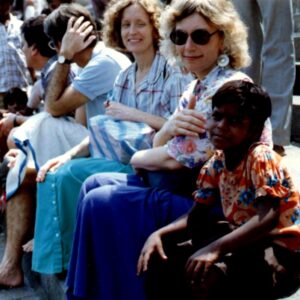 with Harriet, Michael & Vic after a shopping trip (photo by Karen Melamed Smith)

I stripped off my grimy clothes and slept a few hours. At 4 am, Vic and I took a lukewarm shower together, fearing the water would go out any minute. We put on corduroy pants and smelly long sleeve shirts and met our friends outside. This wasn’t the way we wanted to present ourselves to the sage, but we were here.

The first part of this journey was posted on August 16, 2022: Out of Control, Part 1. I’ll continue the story next time. It was a spiritual initiation like no other, complete with chaos, humor, deep peace, and a demolished ego. My first experience of Hindu ritual was in the mid 1970s at an ashram led by a woman teacher Gayatri Devi. I wrote about that experience in A Spiritual Path with Heart.