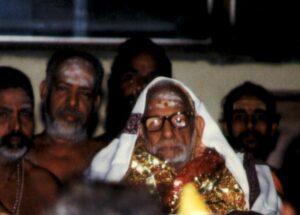 Sri Sankaracharya had a fever and wasn’t giving audiences when we arrived in Kanchipuram, India for a third visit in 1994. We were disappointed, but not surprised. He was 99 and frail.

Vic and I sat in meditation each morning in the area where we’d had audiences with him in the past, but the green curtain stayed closed and we were the only visitors. I still felt the power of his quiet presence behind the curtain, just a few feet away.

“Since Sankara is ill, let’s go to the Ramana Ashram for a day,” Vic suggested after a week of closed curtain meditation. Ramana Maharshi had been our first introduction to Hinduism. I’d imagined a visit to the Ramana Ashram on our two earlier trips to India, but we couldn’t bring ourselves to leave Sankara’s presence. His illness was an opening–and a closing. The Tamil Nadu hotel clerk arranged for a cab to drive us to the ashram and bring us back to Kanchipuram the following day. 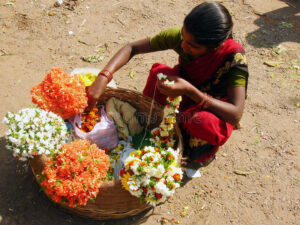 Before we left, I wanted to do my usual morning ritual of offering flowers. I asked the cabbie to stop at my favorite flower lady’s table near the Sankara Temple so I could buy jasmine garlands.

Vic and I went to the now deserted area outside Sankara’s living quarters. The curtain was still closed, but I found a basket for my flowers and arranged the jasmine garlands in a mandala while Vic sat for a five minute meditation.

When we were ready to leave, Sankara’s attendant Balu peeked around the closed curtain and motioned for us to follow him. We tiptoed in bare feet through a dark concrete passageway before entering a bright bare room. 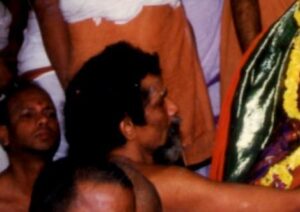 Balu lowered one flattened palm toward the ground.  The silence was deafening. We sat on the cement near a family of wealthy people dressed in gold-threaded silks. Their feet were bare out of respect, not poverty. These diamond people, as the Indians called the wealthy devotees, must have been too important to turn away despite the sage’s illness. After watching us wait outside Sankara’s curtain for a week, sweet Balu slipped us into the sage’s resting place with the diamond people. 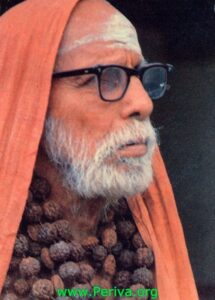 Sankara lay on a cot a foot off the floor. He was sleeping or in a coma, cocooned in faded saffron cotton with the soles of his ancient bare feet facing us. Hindus honor the feet of the guru, so his exposed toes were a blessing.

I watched the gentle up and down waves of the sage’s breathe under the thin cloth while my pounding heart quieted. In ten minutes, Balu touched my shoulder and motioned it was time to leave, but I had sipped a drop of the sage’s silence, a Presence as deep and vast as the Grand Canyon.

Have you traveled a great distance to spend time with a teacher or someone who opened your heart? Maybe it was family or maybe a wise woman or man. I’ll share a few more stories about this last trip to India in coming weeks.