Twelve Rituals That Marked My Way: 2014 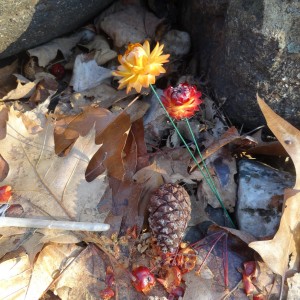 Rituals focus my attention and bring a sacred sense to life. Personal rituals help me honor the things for which I’m grateful–friendship, family, the earth, and bereavement and grief work. In this spirit, I look back at rituals that marked my way through 2014. 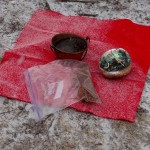 In January, I left flowers and pine cones where my husband Vic’s ashes are buried, a ritual that began after his death over six years ago and continues still.

In February, I took part in a monthly ritual to bless Seneca Lake, resist storage of methane and LPG in underground salt mines, and thank our sacred lake for supporting life and providing clean water.  Trips to Albany to protest against fracking had a ritual feel, too. Our governor heard our message and banned fracking in New York State in December. 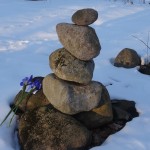 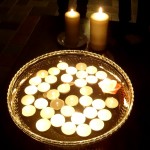 On Vic’s birthday in March, I took purple iris to his cairn and read a poem of love.

In April, I took part in a ritual of remembrance led by Jayne Demakos at Wisdom’s Goldenrod Center for Philosophic Studies.

In May, tulips were part of a ritual I created at a bereavement support group at Hospicare in Ithaca, NY. A few flowers came home for my altar. 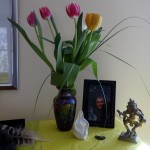 May tulips for altars 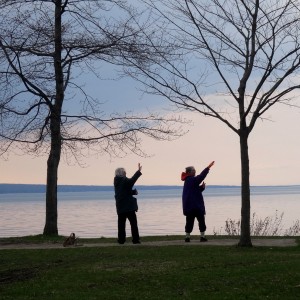 In June, I watched the repeated, dream-like ritual movements of two friends who did Qigong by Cayuga Lake.

The annual Hector Fair Fireman’s parade in Hector, NY is a beloved community ritual. In recent years, those who oppose fracking and work to protect our clean water showed up in full force. 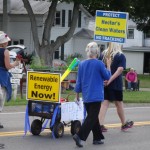 Women Swimmin’ is an annual August fundraiser for Hospicare in Ithaca. Watching hundreds of swimmers stroke toward shore in early morning light was a ritual to remember. 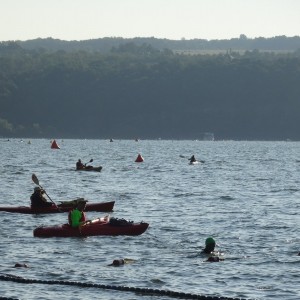 In September, I led a workshop called “Leaning into Love: Rituals for Healing” at Soaring Spirits International Camp Widow in Toronto. We created an altar as part of our ritual of remembrance. 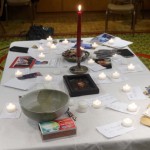 In October, Leaning into Love: A Personal Journey through Grief was released with plenty of private and public rituals. A galley copy of the book was part of an equinox altar created with friends. 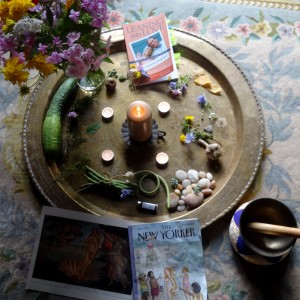 October release of Leaning into Love 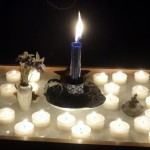 On Thanksgiving, friends and I lit candles for those we miss. I can’t think of November without remembering my TEDx talk, a creative adventure focusing on the power of ritual during grief.

Most of us take part in December rituals with music, decorations, and feasts. This year, I’m building a late December New Year’s altar with seeds for new possibilities and feathers for spirit. I added a Buddha for serenity and plenty of Light. I’ll keep adding things until Dec. 31, but I send it to you as it is with wishes for a blessed and peaceful New Year. What rituals did you create or take part in this year? Weddings, funerals, baptisms, graduations, family gatherings, visits to a cemetery, or small personal rituals meaningful only to you. I’d love to hear about your year in ritual. 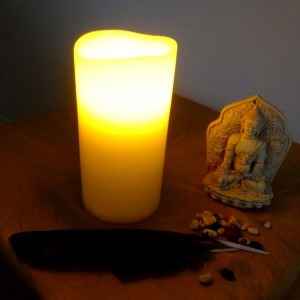