Listening to the Dark: The Descent of the Goddess Inanna

Ancient mythology has much to teach us about grief and mortality. In this post, I take you an adventurous journey into a 5000-year-old story from Mesopotamia. This myth begins with listening.

“From the Great Above she opened her ear to the Great Below.”[i]

In the Sumerian language, the word for ear also means wisdom. Inanna is called to listen to the Great Below, the realm of dream, death, depression, and the unconscious, because she seeks wisdom. Without knowledge of loss and mortality, she is not whole. 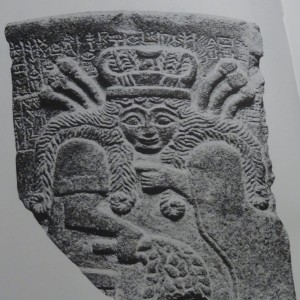 Inanna and Date Palms (2400 BC wikimedia

When my husband Vic was diagnosed with cancer in 2006, I knew I had to listen. I bought a notebook and recorded my experiences from medical to psychological, from hope to anguish, from spiritual peaks to deep despair. I wanted to remember everything. I needed to find meaning.

In her Descent to the Great Below, Inanna tells the gatekeeper that she wishes to attend the funeral of Ereshkigal’s husband. Inanna’s sister Ereshkigal is the Death Goddess. Inanna intends to witness a death, not face her own. I understand. She arrives in full queenly regalia at the gates; I had arrived in the oncologist’s office with my notebook, my list of well-informed rational questions, my suggestions, and my fierce resolve. 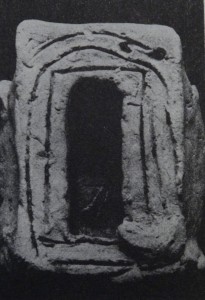 As Inanna passes through each of the gates on her way to the Great Below, she is stripped of a garment or jewel symbolic of her power.

When she (Inanna) entered the first gate,
From her head, … the crown of the steppe, was removed.
Inanna asked: “What is this?”
She was told: “Be quiet, Inanna, the ways of the underworld are perfect. They may not be questioned.”[ii]

Hadn’t I given up enough? Apparently not.

When Inanna reaches the Great Below, she is pronounced guilty for refusing to honor a power greater than her own. Then, she is hung on a hook. In this alarming image, similar to the much later image of the crucified Jesus, worldly abilities and powers are useless. Even this powerful Goddess is stripped and helpless.

So there they are, in the dust and darkness of the Great Below. Ereshkigal cries out in rage and pain. Inanna hangs on her hook. All is dark depression and stasis. There is no hope.

Are there divine forces that can save Inanna and us? 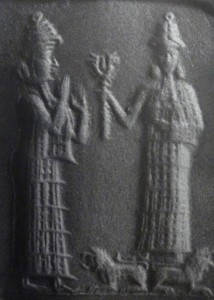 Ninshubur, Inanna’s trusted advisor, gets help. Enki, the God of Wisdom, creates two tiny beings from the dirt under his fingernails. These “insignificant” mourners have one skill: empathy. They witness the suffering of the Death Goddess and mirror her cries.

The mourners provide compassionate mirroring. As in therapy or friendship, empathy transforms. Ask the Dalai Lama what power is equal to Wisdom. He’ll say Compassion. 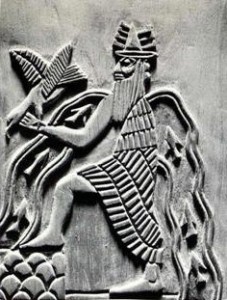 Ereshkigal, the unloved and shunned, grieves for her husband, but we now learn that she is also crying out from the pain of giving birth. Within the deep unconscious darkness, something new is being born. Perhaps Inanna. Perhaps you and me.

Ereshkigal asked (the mourners):
Who are you,
Moaning—groaning—sighing with me?
If you are gods, I will bless you.
If you are mortals, I will give you a gift.[iv]

The mourners don’t want all the riches and resources of the world. They only want the corpse which they sprinkle with the Water and Food of Life. 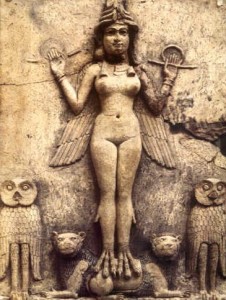 Inanna after her return with powers of Heaven, Earth, and Great Below (~1800 BCE, Burney Relief, wikimedia)

A sliver of light penetrates the Dark Unconscious and releases new energy. Birth will follow death. Spring will follow winter. The Goddess of Heaven and Earth rises and the cycle of life goes on.

As Inanna ascends, there are complications. Aren’t there always? There is no end to death and trauma, but there is also no end to compassion and rebirth.

I returned to life, lost and humbled, displaced and dismantled, even though I consciously knew loss was everyone’s destiny. My fertile forest, the kind mirroring of those who witnessed me, and a search for meaning became my water and food of life. I bowed to Inanna’s wisdom and Ereshkigal’s necessity knowing that death and destruction fuel a new cycle of life.

We descend, not because we want to, but because we must. In many ancient myths, descent is an integral part of the Great Feminine Round of Life and Death. We are mortal and vulnerable. We live in a world of catastrophe and chaos, personal loss and social threat.

We are thrown down. We are helped up. Miraculously, we find our way to life again.

With gratitude to my sister mythological explorers. Our small group has studied ancient feminine traditions for nearly thirty years. Without our gatherings, I would not have dug as deeply or taken this so much to heart. I’m also grateful for the careful scholarship, engaging story-telling, and original images used by Diane Wolkstein and Samuel Noah Kramer in their book Inanna: Queen of Heaven and Earth.

For one of my most well read articles about mythology, see Have They Forgotten They Are Mortal? Lessons from Hecate. You’ll also enjoy Jean Raffa’s article Inanna: Myth of Descent. As opposed to our culture’s interest in ascent myths of heros and conquerers, myths of descent teach us how to survive and grow when we lose what is precious to us.