When the Bluebirds Fledged 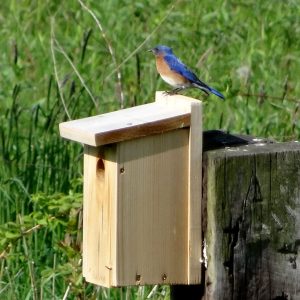 Birds make great sky-circles
of their freedom.
How do they learn it?
They fall, and falling,
they’re given wings. ―Rumi.

In April, the female claimed the nesting box closest to my house, just down the driveway where it turns toward the barn. Her brilliant blue partner had guarded two boxes for a month, chasing tree swallows and other intruders. After making a choice, she began building.

Every morning I opened my bedroom shades to check on them. First thing. I was thrilled when I saw the male or female on the perch or the barn roof and concerned when I didn’t. 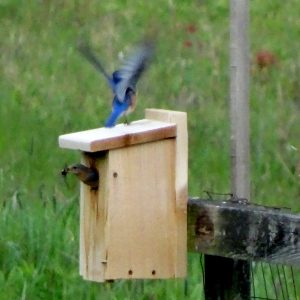 It’s a scary world out there with snakes and red-tailed hawks. I’ve witnessed bluebird tragedies—nests invaded by ants, starlings terrorizing the neighborhood like inner city gangs, and an empty nest inside a box with feathers stuck to the walls and shattered blue shells. The scene of a crime I couldn’t explain.

After the female settled in, I peeked inside the nesting boxes even though Mama and Papa Blue didn’t like it. I didn’t look often and waited until they were out searching for worms and bugs. Mid May, I saw 5 blue eggs. In early June, five fluffy balls with mouths. A few days later, five little beaks open wide, but the parents caught me and protested. I left without a photo. 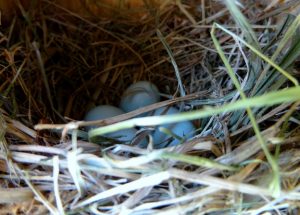 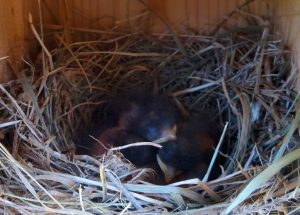 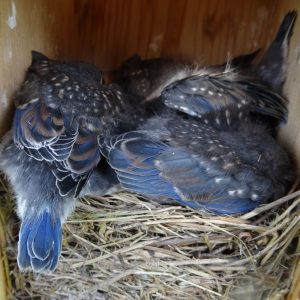 On Saturday, I saw five blue-feathered bodies piled on top of each other, cowering from the blast of light. I snapped a photo, gently tucked tail feathers and wings in place, and closed the door.

Inside my house, I set up an observation site with a telescope focused on the nesting box door and binoculars nearby for scanning the wider view. I watched. For hours. Surely they would fledge any minute. Waiting became a meditation.

There was no more room in that box. It couldn’t take long. The parents had ignored the kids since morning. Little open mouths appeared in my telescope frame poking out the nesting box door. By evening, the parents gave in to their pleas and fed them again.

On Sunday, when I opened my shades, papa was on his perch and mama was tidying the nursery by removing white fecal sacs. The kids were still at home. I watched much of the day, meditating on bluebirds, cheering for life, urging them to fledge.

I waited the way I wait for a glimpse of silence when I sit on my meditation cushion. Breathing. Watching. Expecting nothing. These are skills I’ve practiced for many years, but they still don’t come easy. 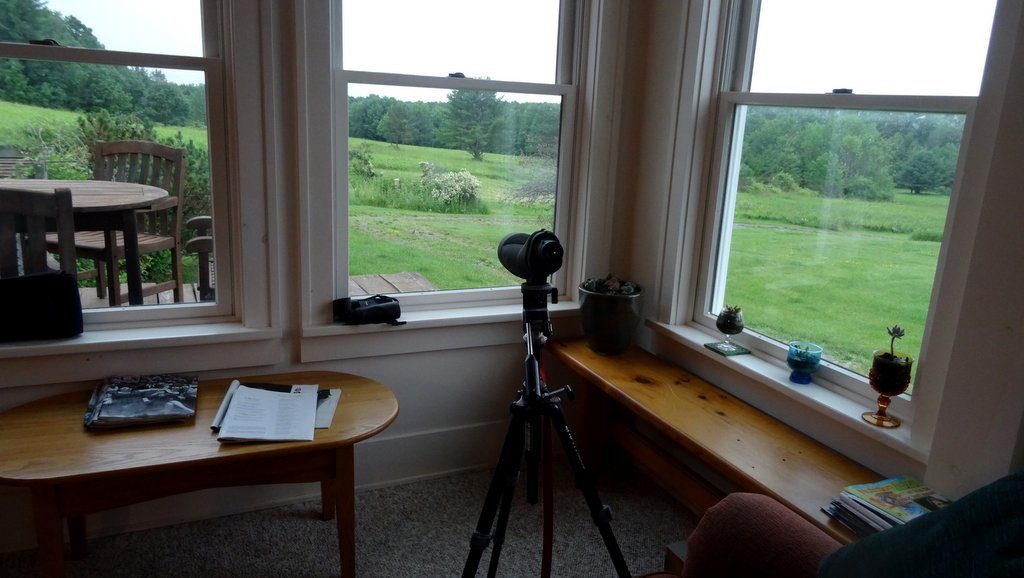 Isn’t there something better to do than sit with a straight back and watch the bluebird house? I asked myself. I didn’t stop. Instead, I settled in for a Summer Solstice Retreat. 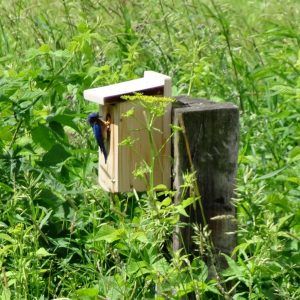 By afternoon, a storm blew through. Out a window blurred by raindrops, I watched a tiny one jump. Just one. No soaring flight. Just a courageous drop into tall grass, a dangerous unknown world.

On Monday morning, I was sure they’d all be gone, but the parents were at work again. I read that it can take days for all the babes to leave home, something any parent knows

Near noon, I watched the last one fledge. A beak crowned through the round nesting box door. Then back in it went. Then the head. Then the neck. No, not yet. Then little feet resting on the doorway before another retreat. Back and forth, in and out, as the parents careened around the box. Finally, the young bird took a leap and flew. 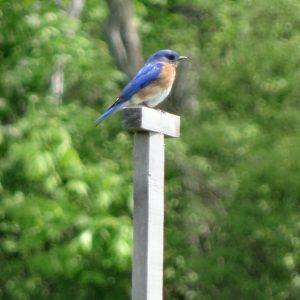 The parents rejoiced in “great sky circles.” Soon the whole family joined in. The kids had their freedom. They had their wings. All seven met in a maple tree, hopping and circling, hiding in the leaves. By evening they moved to the woods where the babes will learn to feed themselves.

Tuesday morning, I spied Papa Blue guarding the box further from my house, the one the female hadn’t chosen the last time. He wasn’t there for long. He had child-rearing duties. 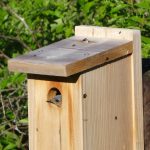 I struggle with vertigo with the wildly changing weather, so bluebird meditation is good medicine. I sit still. I watch. I wait and breathe. In March, after bluebirds had nested for three straight years, my friend and helper Matt Hoff and I figured out how to improve the habitat. Matt cleared nasty brush (thank you, Matt!) near the nesting sites. I bought new Audubon boxes with easy entrance latches. Matt made wire covers over places where starlings had pushed their way into the barn to nest. When starlings perched on the barn roof, they scared the song birds away. Then we waited, knowing the bluebirds would decide if they liked our remodeling. They came.

What do you learn from watching Nature? What rewards do the song birds bring? For other articles about the teachings of Nature, see The Problem with Preferences and Gardening Is a Spiritual Practice.