6 Ways to Invite Love to a Death Anniversary 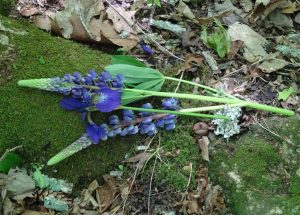 “Your task is not to seek for love,
but merely to seek and find all the barriers within
yourself that have been built against it.” ~Rumi

On June 3, I’ll create a ritual of remembrance for my husband Vic who died in 2008. It’s something I do every year.

“Aren’t you done with that by now?” you might ask. It’s a question I ask myself. 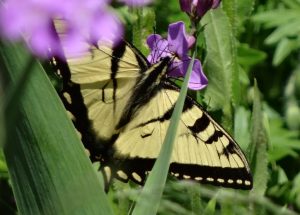 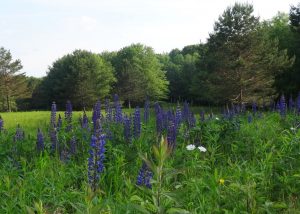 I’m not doubled over with grief anymore, but I don’t forget.

Instead of distracting myself or avoiding my sadness, I make a simple plan. I’ll print a poem and song lyrics and call the dogs to join me as I walk to the forest. Six things help me feel surrounded by love. You may think of more.

You may have a gravesite to visit or an altar in your home or a place you enjoyed with the person you miss. My sons and I built a cairn for Vic in the forest in 2008. That’s my place. This woodland sanctuary was sacred to my family long before Vic’s death, and it’s more sacred now. 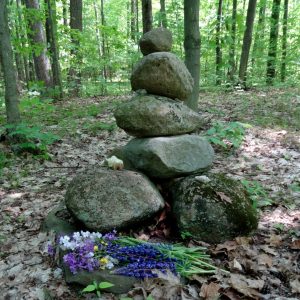 2. Offer flowers or light a candle.

On the way to the cairn, I’ll pick Lupines, Dame’s Rockets, and Buttercups in the field. Near Vic’s cairn, I’ll pray for the well-being of my family at the “family trees,” a cluster of basswood giants that sprang from a central mother tree. I’ll leave some of my flowers there.

Then I’ll turn to Vic’s cairn, brush leaf debris from the flat stone, and place flowers on the rocky altar. I’ll sit on a large round stone near the cairn to breathe and feel the silence.

When my mind is quiet and despite my hearing loss, I’ll sing a familiar song I heard in a dream soon after Vic died. The dream song gave me hope and faith at the hardest time. It still does.

When I find myself in times of trouble,
Mother Mary Comes to Me,
Speaking Words of Wisdom
Let it be…

The lines, “In my hour of darkness, She is standing right in front of me,” will make me cry. They always do. 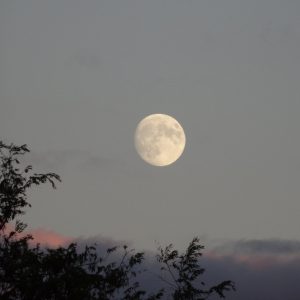 4. Speak from the heart.

I’ll tell Vic (or the Vic in me) how much I love him and how persistent my longing is. I’ll tell him I’m OK without him, but miss him every day. Then, I’ll read this poem.

Your body is away from me
but there is a window open
from my heart to yours.

From this window, like the moon
I keep sending news secretly. 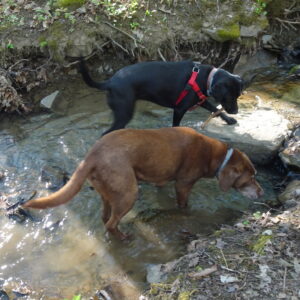 Perched on the stone near Vic’s cairn with dogs bumping into me, I’ll tell Vic the family news. I have a new pup who is great friends with my old dog Willow. I imagine Vic’s eyes sparkling with tears as I tell him about bringing Disco home from the SPCA and what a great companion she has become for Willow and me.

I’ll tell him about this pandemic year and my struggles with hearing loss and living in a world of electronic sound. I’ll tell him our son David came from North Carolina to celebrate Mother’s Day and our other son Anthony bought a home and land just three miles from me. I’ll tell him we have much to be thankful for. 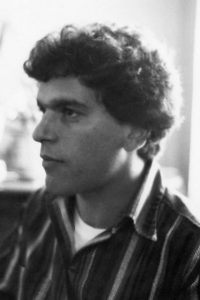 6. Let grief out to make space for love.

When I don’t defend my heart against the pain of grief, love pours in. When I unbandage the wound and tend it, compassion for myself and others who grieve pours in. I don’t say, “Grief, you’ve been around too long. You should be gone by now.” I don’t resist. I don’t pretend my heart didn’t hurt. Instead, I let it be. I let myself be.

Tears dampen my shirt, but instead of drowning in grief, I float in love.

I first wrote this piece in 2017, but I edited to bring it up to date. A lot has happened for all of us, for the whole world, in the last four years. Have you created a personal ritual to honor someone you love on a difficult anniversary day such as a birthday or a death day? Was it helpful or meaningful? For other posts about rituals, see Creating a Grief Ritual. I love using poems in my blogs and in rituals. The poems in Poems to Grieve By helped me most at the hardest times. Since it has over 26,000 readers, it must be helping others, too.