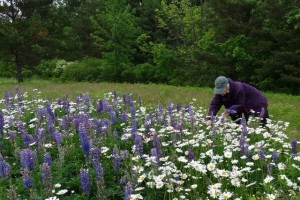 June 3, 2012 was the fourth anniversary of my husband’s death. I put aside time that day to mourn for Vic and our lost future while honoring the gifts of our marriage and my emerging life.

My friend Janet Wylde and I pulled on our rubber boots for a drizzly morning walk through fields of blooming lupines. Vic and I planted wildflower seeds for many years. Some varieties failed, but wild purple lupines thrived and spread across the hillsides on our land in the Finger Lakes region of New York.

Thousands of exuberant lupine spikes welcomed me home the day Vic died in 2008 and their annual bloom on his death day became a symbol of renewal after loss and new beginnings that accompany the worst of endings. 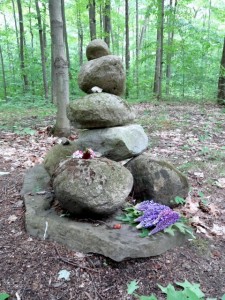 On the first anniversary of Vic’s death in 2009, I invited friends and family for a walk to the forest site where Vic’s ashes are buried. My sons David and Anthony came home for the occasion, dreading what they thought would be a morose affair, but the June sunshine lit up the lupines and made everyone glad to be alive. We walked the trails, left flowers at Vic’s memorial cairn, shared food and wine, and celebrated life, love, and continuing bonds.

Since that first year, my rituals have been simple and private, but they always include walking through the flowering fields and leaving lupines at Vic’s gravesite. This year, after the morning walk, a prayer of gratitude, and the offering of flowers, I called Vic’s mother and spoke with my sons. Then I took time to remember and write, honoring all I have learned from grief.

I wept for what I have lost and, later in the day, I remembered to pick a bouquet of purple lupines for myself.

A simple grief ritual can be meaningful and healing. I’d love to hear about the rituals you create.

You might enjoy the following articles about grief rituals—some elaborate, some simple, some communal, some private, each bringing comfort.

Paul Bennett writes about a simple but powerful ritual in a chapter from his book Loving Grief.

At Journey through Grief, Janelle Shantz Hertzler writes about personal rituals she and her friends have created.

Marty Tousley is a hospice bereavement counselor who focuses on Valentine’s Day in this article, but her ritual suggestions are useful any time of year.

Finally, a list of ritual ideas from Utah Hospice Specialists.