From Medicine to Mercy 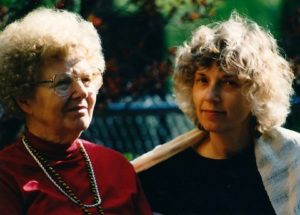 In 1998, a staff member at the senile dementia home in Rochester found Mom passed out on the bathroom floor, bleeding internally, moving gently toward death. Mom’s husband Herlie wasn’t ready to let go, so he rescinded the Do Not Resuscitate order she had signed ten years before, overriding her clear intentions.

Mom endured four weeks in the hospital, transfusion after transfusion, followed by surgery, followed by incessant needles taking blood samples out and putting new blood and nutrients in. My polite mother who never raised her voice screamed in protest and ripped out the IV lines. They tied her arms and put thick mittens on her hands, but she escaped her restraints like Houdini. Then she bit the tubes in half.

“They’re trying to help you, Mom,” I pleaded as I lay across her fragile, flailing body, holding her so a technician could draw blood.

“They’re doing a lousy job,” she howled in my ear.

Two weeks after they discharged her to the nursing home, her husband Herlie called.

“They tried to put a new IV line in your mother, because the doctor says she is dying of malnutrition,” he said. “She’s fighting like a wild animal. They called the hospital to get a special nurse to sedate her and put the line in.”

What? No one mentioned this possibility when I was at the nursing home two days ago. Tie her down and terrify her again? The knot in my gut shrieked, Absolutely not! Somehow, I spoke in a calm, measured tone.

“Could you delay the intravenous feeding until the family has a conference call with the doctor?” I asked. Herlie agreed.

My brother Jim and I joined the doctor and Herlie on the phone the next morning. The doctor gave my mom’s case history: unhealed infected wound from ulcer surgery, alarmingly low serum albumin levels, severe malnutrition and dehydration. Then there was her advanced dementia and combat-ready attitude. She bit, scratched, and screamed; she ripped the stethoscope from his ears. The doctor’s calm voice betrayed no feeling. I struggled to hold back tears. Finally, the doctor listed tortuous options, each sentencing my mother to months of medical invasion, sedation, and restraint. 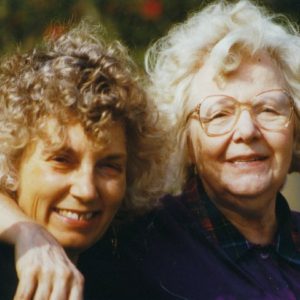 “What would you do if this were your mother?” I interrupted.

There was a long pause.

“We could stop all medical intervention?” I ask.

“Yes,” the doctor said, and Jim agreed. After another long pause, Herlie agreed. We were silent, suspended, waiting for Herlie to change his mind, but he didn’t. We took a breath and thanked the doctor, our relieved words spilling out and crashing into each other. 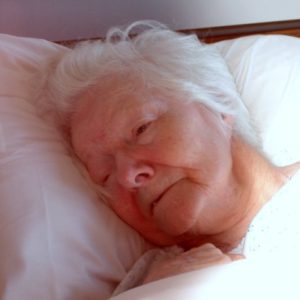 A few days later, I drove to the nursing home to meet the new Hospice aide. Mom sat in her wheelchair, studying the snaps on her blue flowered smock. She looked up with bewildered pale blue eyes and smiled for the first time in six weeks. She didn’t know I was her daughter, but she trusted me. I coaxed her to swallow tiny bites of pureed food and sip chocolate Ensure through a straw. Soon, she begged to go to sleep, moaning softly as the aide and I tucked her in. The wild woman had become a sweet baby girl.

“I like it here at your house,” she said quietly, her bony arm drawing a vague circle in the air. I had a feeling she would stay a while.

This article was one of my first blogs in 2012. I’ve added a few photos but kept the text the same. For other articles about my mother and me, see My Mother’s Rules: Good Grades and No Babies or for a story of her last years, Mother-Daughter Healing: An Alzheimer’s Story.