The Problem with Preferences 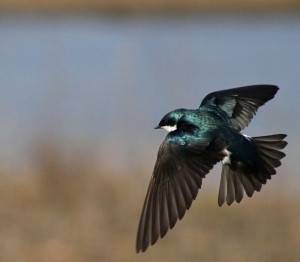 I saw a bluebird couple yesterday. “No, NO!” I wanted to yell. “Don’t sit on that nesting box. The tree swallows live there. Try the empty box closer to the house.”

They wouldn’t have listened. So, I watched through my binoculars and waited. My belly tightened. My jaw clenched.

Zoom from above… The tree swallow dive-bombed the bluebird boy. The bluebird flinched and flew away while his lady watched. A bad move if he wanted to persuade her to live here.

She stayed on her perch until the third swallow dive. Then she flew toward the maple tree where I lost sight of them. 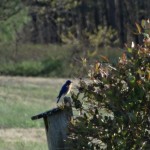 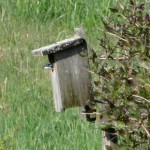 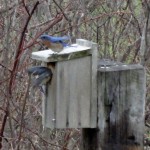 Fifteen minutes later, I walked outside. I kept a distance from the nesting boxes. The swallow watched from his perch at the other end of the railing. The bluebird female burst from the brush where she’d been hiding. A second scare, this time by a clueless human.

In five minutes, the man who mows showed up and parked his truck next to the vacant nesting box. “Uh, could you please park down by the barn,” I asked. “The bluebirds were spooked a few times this morning. I hope they’ll nest in that box.

“OK,” he said. He moved the truck, but he and his young employee unloaded their mowers and roared around the yard like dirt bike racers. 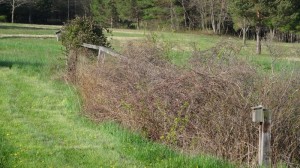 I watched for bluebirds all afternoon but didn’t see them. The swallows relaxed as they settled into the distant box.

This morning, I saw the bluebird boy again, sparkling iridescent in morning sun. The swallow stayed on his roof. The bluebird boy checked out the empty box.

Yes, yes, yes. They’re working it out as they always do—except last year when swallows chased the bluebirds away.

Blueboy must have glanced in the wrong direction or ruffled his feathers too boldly. Swallow folded his wings into his sides and turned into a torpedo. I had to admire his speed and grace, but the bluebird boy took off. My heart sank. 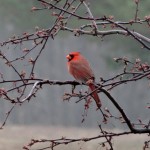 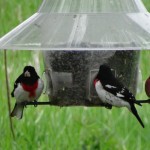 I carried the binoculars around all day, peering out the windows, searching for bluebirds, anxious about them and everything else. I had awakened at 5 a.m. with tight free-floating anxiety. It wasn’t about bluebirds. My brother died a few weeks ago. My protector is gone.

I didn’t see the bluebirds again. If he can’t defend the turf, the airways, the treetops, the TV antennae, the female won’t nest here. 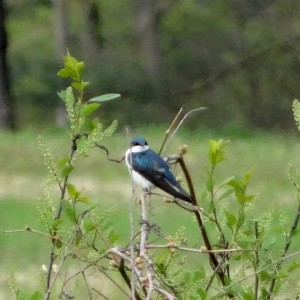 And the winner is… Tree swallow

I’m not a mellow bird watcher, the kind who patiently waits all day for a sighting. I’ve become a fretful watcher. I forget to admire the crest of the cedar waxwing in the weeping crabapple tree. I ignore the startling crimson of the cardinal’s shimmering feathers. I turn my gaze away from the mourning dove and robin and ignore the joyful song of the rose breasted grosbeak. I forget to admire the acrobatic mating dance of the blue-black swallow as he swoops through the air with his shiny mate. I want just one thing.

The problem is my preferences.

What does nature teach you? What do you see out your windows? I’m fortunate to have a fine bird show. My camera isn’t quite up to the distant photos, but you get the idea. For other posts about learning from nature, see Give Thanks for the Teachings of Trees and Planting Joy in a Season of Sorrow.