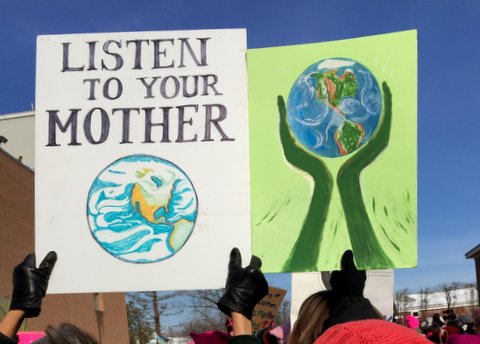 We drove along the west side of Cayuga Lake toward Seneca Falls, NY, the site of the Women’s Rights National Historical Park where the first Women’s Rights Convention met in 1848. One year ago, Jane and Roger and I drove to Washington, DC for the national march. This year, we stayed closer to home.

After parking, we waited in a long line for a shuttle. Tears rolled down my face as I watched people board school buses. This sea of women, men, and children had awakened too early on a Saturday morning, pulled on winter boots, grabbed their pink hats and signs, and showed up. 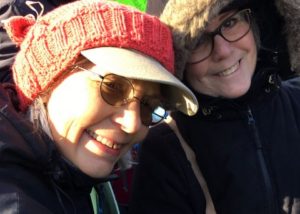 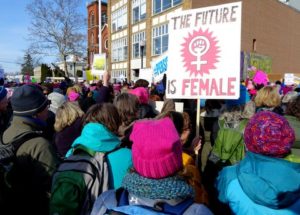 By the time we entered the bus, hot salty tears flowed down my cheeks. A man younger than my sons offered me his seat. “No, I’m OK,” I said. “I’m OK. I’m happy.”

He motioned for me to sit down with a pleading smile. His girlfriend’s eyes begged, “Please sit down.” Accepting myself as a white-haired elder who couldn’t convince them weeping was a good thing, I sat. Tears kept coming as we drove toward the park.

Others peered into my face with concern. “I’m OK,” I mouthed looking at them through wet eyes, smiling and bringing my hands together in prayer position over my heart. “I’m happy.” 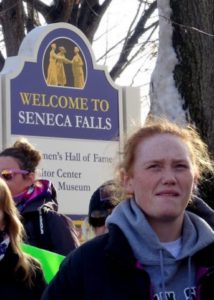 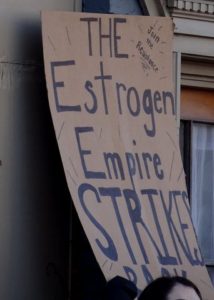 If it hadn’t been noisy and crowded, I could have explained my complicated feelings. I was happy to be there. After having a feverish flu the week before, that wasn’t a given. At the same time, I ached for the suffering of this beautiful earth, for her swimming, winged, and crawling creatures, for the displaced and hopeless, for humans, ancient trees, and clear water. My heart longed for a positive future that felt a little closer because we’d gathered together to demand justice and equality.

As speeches blared over the PA system, I watched signs and searched for friends. Everyone was hungry for connections. Old connections. New connections. A sense of community.

“I’ll hold my sign high,” I wrote in a text to close friends who had driven separately. “The one with the Goddess’s hands holding the earth. Maybe you’ll see it.” 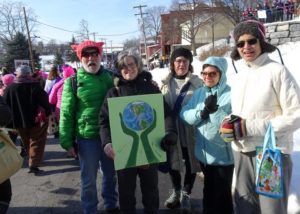 With Roger, Jane, and friends who found my sign at the march

From behind, someone yelled my name. They’d seen the sign and joined Roger, Jane, and me for the march. I fell in love with so many signs, especially one that said “The Estrogen Empire Strikes Back.”

I thought about how estrogen works with oxytocin to soften our hearts toward the suffering of others. To make us long for touch, bonding, and affection. To encourage us to care for and protect each other. To build community and human family.

This is how Estrogen strikes back—with hope, hugs, and concern for the suffering of others. 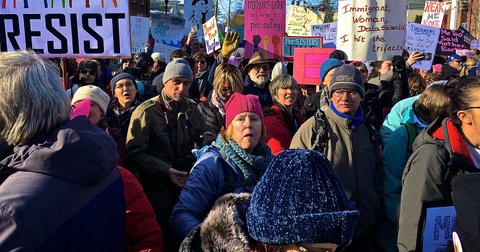 As we hiked back to the car after the march, my friend heard someone yell from a gas station, “You’re a bunch of weirdos.” I remembered being a weirdo for standing against the Vietnam War and, years later, for supporting our national forest from development. I remembered being a weirdo for opposing gas storage near Seneca Lake, for standing against nuclear war and for universal health care, and for believing that everyone should have a vote, healthy food, and education. 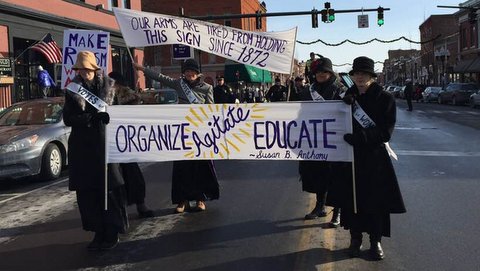 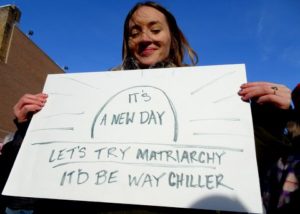 Through the eyes of patriarchy, estrogen may look weird. To my eyes,  it’s healthy, healing, and edifying.

With gratitude to Seneca Falls, for hosting this large gathering. Did you take part in a march near you? What was your experience like? Or did you see marches on the evening news? Do peaceful protests give you hope for our future? To read about traveling to Washington, DC on Jan. 20, 2017, see Giving Hope a Seat between Anxiety and Grief: Women’s March on Washington.

For a moving video about the march in Seneca Falls from FingerLakes1.com see Women’s March, Sights, Sounds, and People from Saturay’s Historic Event in Seneca Falls.