Giving Hope a Seat Between Anxiety and Grief: Women’s March on Washington 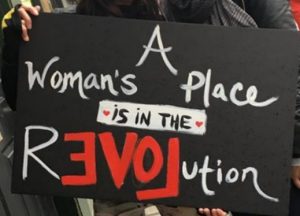 The day before the Women’s March on Washington, I’d driven seven hours south to a Maryland suburb with friends Jane and Roger to spend the weekend with their friend Grace. Grace arranged for us to join her neighbors the next morning so we could travel to the march together. 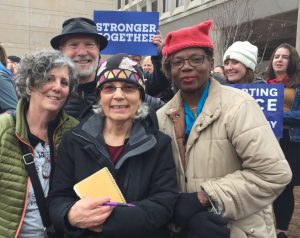 Jane, Roger, Grace, and me 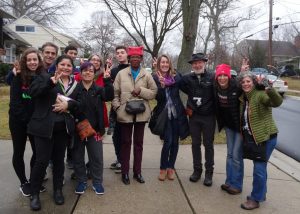 The group from Grace’s neighborhood

Metro stations near the march were closed because of crowds, but Grace’s young neighbors knew alternate routes. As we got closer, it was hard to see, hear, or move. To stay with our group, I kept an eye on Grace’s pink hat. I wore images of the fierce Egyptian lioness goddess and protector Sekhmet—a different kind of pussycat. 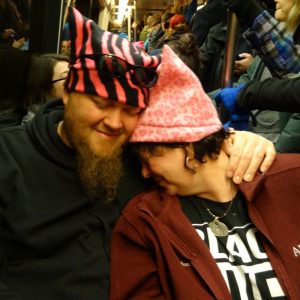 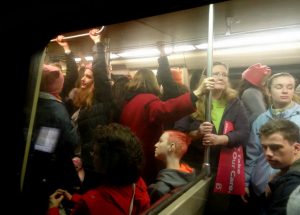 Waiting to get in a Metro car

Tibetan nuns and teenagers offered me a hand up on a wall for a better view. A man about twenty stood beside me with eyes beaming kindness. Tears of sweet joy dripped down my cheeks.

Police officers leaned against their parked flashing cars and beamed big smiles. Some wore pink hats. I saw barricades and traffic control, but didn’t see a sharpshooter or a tank. Peace and hope ruled, not flyovers. The Washington Police said there had been no arrests. Not one. 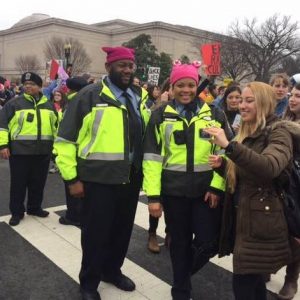 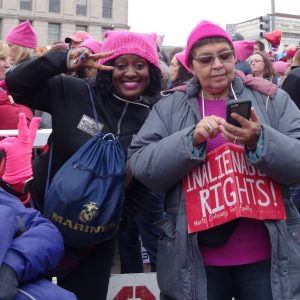 Since I couldn’t hear the speeches over the PA system, I listened with my eyes. The crowds parted for a man with a stroller. Then a white-haired woman with a cane. Young mothers held babies against their hearts. Joyful girls carried homemade signs and hats.  No one looked afraid or hopeless. I thought of antiwar marches in the 1960s and climate change rallies in recent years, but I’d never seen a love fest like this.

With half a million others, my heart offered Hope a seat between Anxiety and Grief. 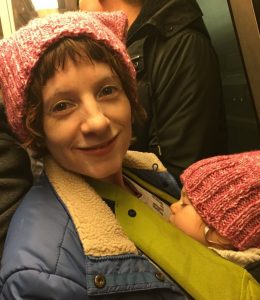 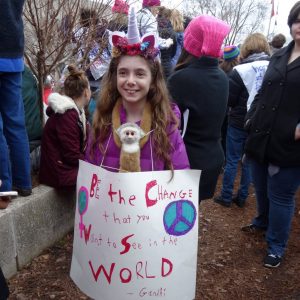 These people cared. They said “No!” to rage and prejudice, selfish greed and “alternative facts.” A young woman’s sign said, “I had been taking MY FREEDOM for granted.” The crowds in DC and Los Angeles, in Memphis and Denton, TX, in Seneca Falls, NY and Boston weren’t taking their freedoms for granted anymore. 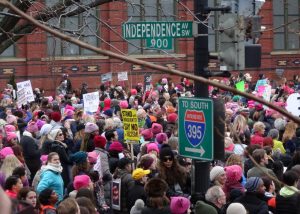 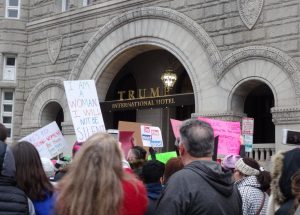 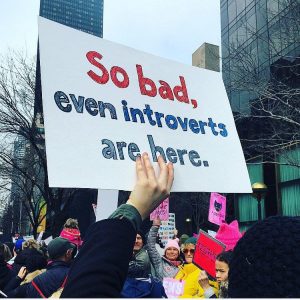 After the rally, police canceled the original parade route because of crowd size, so protesters moved away from the National Mall in many marches through city streets. Following Grace’s hat, I heard loud persistent chanting and saw everyone looking up. I followed their gaze to see the entrance of Trump Hotel. No one threw a rock. It would have been easy, but it wasn’t that kind of day.

We had gathered in peace to protect democracy and social justice. We gathered to protect women, children, minorities, and those excluded from the American dream. We gathered on behalf of the Earth and our future. Thank you, America, for refusing to take our messy democracy for granted. 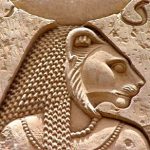 On Sunday’s drive home, we talked about what to do next. What one thing felt passionate, possible, and positive? When I got home, I found a message titled Ten Actions for the First One Hundred Days. It’s a great place to begin. Thank you to the Women’s March on Washington (and Everywhere) for organizing, inspiring, and recognizing this as only the beginning of hard work ahead.

For a post about my first anti-war demonstration in 1967, see Civil Disobedience against the Vietnam War at the Peace Bridge. For an article about the last time I went to Washington, DC for a climate change demonstration in 2013, see Standing Up for Mother Earth.