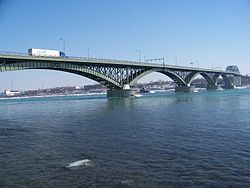 I lean into Vic, tucking my shoulder under his arm. Feeling me tremble, he unzips his jacket and wraps it around both of us. I’d rather be in bed, pressed against his naked body, but instead I’m shivering in the March wind.

We’re at a park near Peace Bridge in Buffalo, NY. It’s March 25, 1967, Easter Sunday morning, and we’re protesting the war in Vietnam with a group of Quakers. Last night, we ate a white rice and green tea dinner, Vietnamese poverty style, in the basement of a nearby Unitarian church. Fifty people gathered in a circle of folding chairs to plan strategy and give working orders. “Stay with the group,” we were instructed. “Do not respond to violent actions or words, be respectful, keep a peaceful mind. You are witnessing for the suffering in Vietnam.”

Somehow, in that circle of eager inspired faces, Vic and I agreed to be two of the ten protesters who would carry medical supplies for both South and North Vietnam across the Peace Bridge this morning. We are making a humanitarian point about the war, although our government accuses us of aiding the enemy.

Now, it’s 4 am. We’re standing near the bridge entrance with other protesters, silent, holding our signs, and witnessing. My toes are ice cubes, and the bitter wind burns my face and numbs my thighs. My body aches for sleep. Young men scream obscenities at us out car windows. Why aren’t they home in bed? I wonder. A battered car swerves up on the sidewalk toward us, but then swerves back onto the road. We silently hold our ground. A guy in the passenger seat rolls down his window and shouts, “Love it or leave it.” The driver hits the accelerator and the wheels screech, leaving a trail of burned rubber.

When the cold night breaks into a gray comfortless dawn, we hurry back to the church basement for steaming tea. A woman hands me a blanket. Moving close to Vic, I drape the blanket over our shoulders. This will be all right, I tell myself. It has to be all right. 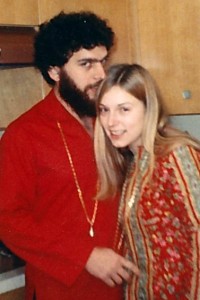 At 9 am, one hundred protesters congregate on the United States side of the bridge and move forward silently, staying close together. Many carry anti-war signs. Vic and I carry cardboard shoe boxes filled with gauze bandages and wrapped in brown manila paper. Bandages: value $1.00, we had written on the yellow customs paper. Destination: Ho Chi Minh City and Saigon. Near the customs booth, most of the marchers stop while the ten with boxes continue forward, silent and orderly, following the Quaker man in charge. Police surround us. How did I get here, herded by men with cold eyes and loaded pistols? The cops funnel us into a small room.

“What do you have to declare?” the uniformed customs officer demands, taking his part in this drama seriously.

“Medical supplies, sir,” we say, handing over our customs forms. “Some boxes for South Vietnam and some for North Vietnam.”

“Sit down over there,” he orders, pointing toward a small waiting area at one end of the room. “You are being detained.”

My heart pounds with fear, but the Quakers who are used to civil disobedience are calm, even serene. We sit on hard benches for one hour, for two hours. There are whispered negotiations between the customs officers, the police, and the Quaker leader. I fret over the secret decisions being made by men who do not care what happens to me. I decide I will be OK as long as they let me be in the same jail cell as Vic. But, of course, I will not be in the same cell as Vic. He will be with the men, and I will be with the one other woman in this group. Please, don’t let them arrest us, I plead to some distant deity who is unlikely to intervene. I’m only 21. I don’t want to go jail. Let me lie naked in a clean bed tonight, pressed against Vic’s warmth. Please God, let us go home.

We sit until mid afternoon, scared, hungry, and exhausted. Then, without explanation, the Quaker leader tells us to follow him. We walk to the Canadian side of Peace Bridge, hand our packages to the Canadian Quakers who wait there, and walk back to the US side of the border. The police have disappeared, along with the tension.

Someone decided that our symbolic act of civil disobedience isn’t worth a hassle. Bigger things are brewing like the marches in New York City on April 15 and the Pentagon in October. The US government has bigger fish to fry.

Where were you and what were you doing during the Vietnam War? Did you commit civil disobedience? To read about more recent activism, see Angry Faces, Placid Water.