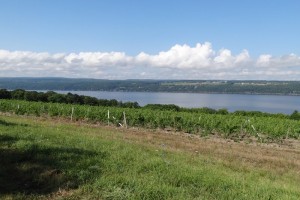 It’s 9:30 pm when I hear from the speaker at the podium that the Inergy representative left the building before the public hearing ended. David Bimber, the regional head of the New York Department of Environmental Conservation whose job it is to approve or deny Inergy’s gas storage proposal, is nowhere to be seen. Our local elected officials did not show up for this public hearing. Half of the 600 people in the high school auditorium have left. A few close their eyes with exhaustion. The rest have angry faces.

I arrived at 4:30 on the corner outside the Watkins Glen High School with my “No LPG facility” sign and stood with friends and strangers to protest the storage of liquid petroleum gas (LPG) in the salt mines beneath Seneca Lake. Watkins Glen and its neighboring township Reading are old salt mining communities. The water-filled caverns are extensive and hundreds of feet deep, promising cheap storage for the gas industry and nightmares of water pollution and explosive accidents for those who live here. The nuclear industry proposed storing spent fuel rods in the mines a few years back, but the permit was denied because of fault lines under the caverns. Apparently, LPG gas under the lake and a plan to turn this small and exquisite tourist area into the LPG gas distribution center for the northeastern United States doesn’t evoke the same fears as nuclear waste. 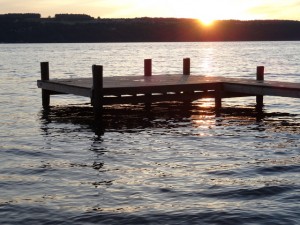 Last night, I drove three miles from my home to the shore of Seneca Lake. The water mirrored the setting sun and apricot streaked sky. Willow, my Labrador retriever who takes to the water like a harbor seal, quivered and bounced as we drove down the lake road toward the boat launch site.

I walked to the end of the dock and hurled a stick. Willow launched her sleek brown body off the dock, belly flopped with a splat, and pumped toward the stick. Nearby ducks quacked and lifted beaks of seaweed, unthreatened by our commotion. My tight shoulders dropped with a sigh. For days, I’d labored over a four-page comment letter to the DEC to protest Inergy’s plan. I’d focused on every alarming problem with the proposed storage site. Just above the lake, they plan a 14-acre brine pond, an industrial flare, and a noisy industrial facility. There are nearly one hundred salt mines nearby. The possibilities are staggering.

In the high school auditorium, my exasperation ties me in knots. I want to run away from the ugly feelings—mine and everyone’s. I see how my anger mirrors the antagonism of the gas company that feels thwarted by protesters. Anger closes my heart and makes me forget that we are on this planet together, living and dying together.

Chagrined, I turn to what has helped me survive many hostile town and county government meetings this year. I chant an ancient name of the lake inwardly, silently, as a healing prayer for Her and for myself.

The modern name Seneca Lake comes from the Seneca Indians who once lived here. Michael DeMunn, a local conservation forester and writer whose grandmother was a Seneca Indian clan mother, told me his grandmother said the lake loves hearing her true name which is roughly translated as Lake in the Hills. When I repeat the sounds, my heart opens and I remember to hold a calm center in the midst of frustration, betrayal, and human greed for cheap energy.

We need a miracle to protect you, Mother Lake. You are beautiful and vast, the deepest and largest of the Finger Lakes. You are the home of many living beings besides humans. Your waters can be wild and churning, but last night, you soothed my anger with placid water, reflecting your calm acceptance of what is. You will be here long after these unruly people, this building, this town, and I are gone. May we leave You clean and full of life for those who come after us.

For details about gas storage in the salt mines under Seneca Lake, see Gas Free Seneca