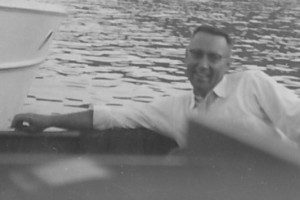 In late October 1959, the illness began as a simple cold and quickly moved to kidney failure. Since Dad was sick for twelve of my fourteen years, I was used to this. His doctors often predicted the worst, but they were always wrong. I expected him to survive again.

For the next few weeks, I spent my days in Dad’s hospital room doing school work and reading books while he slept. With me doing hospital duty, Mom could finish classes needed to get her teaching certification. By early November, Dad came home. While my mother was at night school, I prepared his dinner, rejoicing when he ate a few bites of broiled chicken and baked potato. The next morning, he was back in the hospital.

Mom called my brother Jim home from his freshman year at Yale. Jim took me aside to spare my mother the job.

Even though I’d spent weeks in the hospital with Dad, my grandparents convinced my mother that I was too young to witness death. It would upset a girl of fourteen, they reasoned. Scared, I agreed, but after a few days of banishment, I changed my mind.

“It’s my right,” I begged. I was sitting on Mom’s unmade bed, watching her frantically rummage through her dresser for something clean to wear to the hospital. “Mom, he is my father. I have to see him.”

My distraught mother gave in.

A few hours later, I followed Mom into Daddy’s hospital room. I stared at his quiet body, tubes sticking out everywhere. He was swollen nearly beyond recognition and his skin was yellow, but when I touched his hand, he opened his eyes and smiled. His puffy fingers gently tapped the stark white sheet next to his body, inviting me to come closer.

“Come here, Lanie, and give me a hug,” he whispered. His voice was weak, but it was my daddy’s sweet reassuring voice. I crawled up on the bed, found a place to curl my body next to his, and placed my hand on his chest.

My tears erupted and dripped on the sheets. I knew I shouldn’t upset Mom or make a scene. I mumbled something; I don’t know what. I hope I said I love you. I stumbled down a drab corridor and made my way to an empty waiting room, lit dimly by low November light. I cried myself dry and then waited. Where were they? Why didn’t my mother or brother come for me? What was I supposed to do?

It seemed like hours before I swallowed my fear and walked back to Daddy’s darkened hospital room. I paused at the threshold and listened to his labored breathing, but could not make myself go in.

Dad went into a coma that night. Two days later, Mom held his hand and sat alone with his death and her frozen feelings. No one mentioned how I felt or what had happened to me. In 1959, there was no Hospice bereavement support to help my family through.

How was death handled in your family when you were a child? Have you needed help with grieving but didn’t know how to get it? Please visit the bereavement section of my website, for more articles on managing loss.

Learn more about the extensive bereavement services offered by Hospicare and Palliative Care Services of Tompkins County or your local hospice organization.