Love Notes: The Magic That Made Our Marriage Work 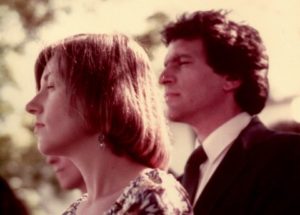 During an exhausting week of moving my husband Vic’s 102-year-old mother to a nursing home, I searched through an old file cabinet looking for a paper needed to fill out her insurance forms. I hadn’t visited those files since Vic’s death in 2008.

After finding what I needed, I wondered what else was in there. My heart skipped a beat when I saw a manila file labeled “Vic’s Letters.” It was tucked between a file of Marion Woodman’s letters and a file of notes on the Greek/Roman story of Eros and Psyche.

I was exhausted, resentful, and sad about moving Vic’s mom. I longed to have Vic with me. Vic’s first book was Synchronicity, Science, and Soul-Making, so before and after his death, I linked him with synchronicity (an acausal connection between inner and outer events). This wasn’t the first time I’d found love notes from him at a hard moment. 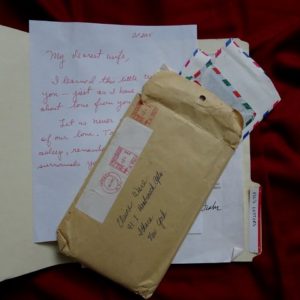 My maiden name was Ware, so some letters are from 1967

Marion Woodman was my most influential and closest Jungian teacher. The tale of Eros (Love) and Psyche (Soul) has been part of my life since first studying it 25 years ago in a women’s mythology class and more recently in workshops with Marion Woodman. Uniting Love and Soul mattered to both Vic and me.

No matter how sick or busy or overwhelmed, Vic and I took time to connect. It was Valentine’s Day every day. When he packed for a trip, I slipped a note in his suitcase between socks and undershirts. He left notes on my pillow before leaving. He sent email or letters when away. He rocked me in his arms when he came home.

Still, even a good marriage has rough spots. Vic took up too much space with his teaching and writing, space I wanted for myself. After childhood with a difficult and often insensitive mother, he craved mothering as an adult. I didn’t always want to give it. He taught two hours away from our home, so for years we lived in two places and commuted with two boys and a dog. Guess who kept that show on the road?

“We don’t have enough sex,” he complained after I went through menopause.

“You’re too fast for me now,” I said. “When we were young, you had many orgasms in a night so that gave me lots of time.”

We tried new tricks with some success. Then, the summer after his stem cell transplant, we found a perfect spot. Cancer slowed him down while Viagra kept him up. We enjoyed delicious unforgettable passionate slow sex I’ll never forget.

Despite bumps, our marriage felt solid and strong. And honest. This week, I dug through my feelings about being left alone with his mother. With the help of a dream and my therapist, I realized I wasn’t angry at Vic. He didn’t ask me to take care of his mother. Caring for her was my idea. It was the right and kind thing to do even though it’s been hard.

My anger told me it was time to change an impossible situation that no longer worked. 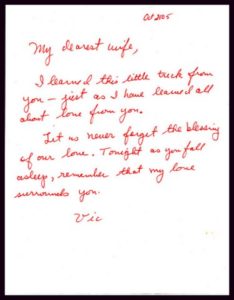 The file labeled “Vic’s Letters” held twenty letters, some in red, white, and blue overseas airmail envelopes from the 1960s. I counted them, but didn’t open and read each one. Instead, I read the first. That plunged me into the Underworld of grief and longing. It also made me feel held and supported. The rest of the letters would wait. Just one was enough.

(The trick he mentions in the note is writing love notes.)

My dearest wife,
I learned this little trick from you—just as I have learned all about love from you.
Let’s never forget the blessing of our love. Tonight as you fall asleep, remember that my love surrounds you.
Vic

He was not perfect and I was not perfect, but we freely and frequently expressed love and gratitude for each other. That was the magic of our marriage.

His  notes became enduring gifts. They still show up when I need them, even ten years after his death. In 2005, he wrote the words I needed to read this week. I fell asleep surrounded by love. 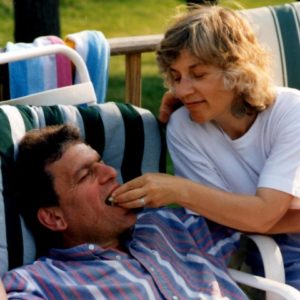 Put a heart or a poem or a few sweet words on a piece of paper or a posted note for someone you love. It doesn’t have to be fancy. Repeat often. The person you love may save those notes and open them many years later when they need to remember your love.

Do you write love notes to your partner, children, grandchildren, or friends? Do you save notes and letters written to you? Have you found notes you didn’t remember stashing away? Have you printed emails from someone you love and put them in a file? Yes, I read all those letters from Vic many years ago, but they will have new meaning and significance now.

For another article about finding a powerful love note the night before I gave my TEDx talk, see A Love Note from Beyond. For a post about my relationship with my mother-in-law, see  To Forget and To Remember. I’m taking notes about what’s happening with my mother-in-law and pondering my relationship with her during this big change. I’ll share that soon.