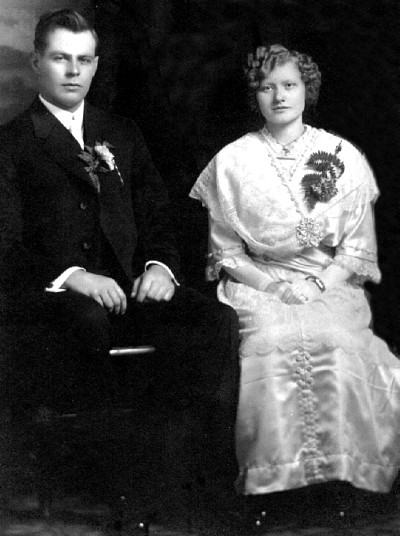 After Mom entered an Alzheimer’s residence in 1995, I received two cardboard boxes of mementos. Her husband had found the musty crushed cartons in the basement when cleaning out Mom’s possessions. Since Mom no longer recognized what she once cherished, he mailed the boxes to me.

One contained every letter I’d written her since my freshman year in college. The other held folders from Mom’s file cabinet.

Rooting through health and education records, I found a file labeled “Margaret Sibberson Welling,” my maternal grandmother’s name. Inside was my grandparent’s wedding photo. Grandma stares into the camera, vulnerable and slightly worried, a thick white satin sash and silk cape draping her petite body. Grandpa leans away from her, concealing his feelings behind tight jaws. His left knee brushes her thigh, softening the distance between them. 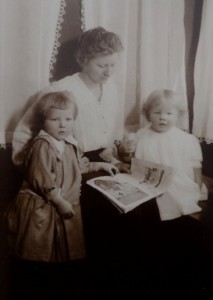 Grandma and her daughters, my mom on left

Grandma was six months out of high school, the eldest daughter of the hired man on Grandpa’s father’s farm. Grandpa, eight years older than she, had traveled to California and British Columbia, returned to the family farm in northern Ohio, and swept her off her feet. He took her for her first automobile ride and promised her a city life.

In the file, I found my grandparent’s wedding license, faded but distinct. The certificate said they were married on January 6, 1915. Someone made a mistake.

Digging deeper, I found a creased and yellowed church announcement printed in a different hand. And there was that date again: January 6, 1915, not January 1914 as Grandma always said.

Proper and protected Grandma must have been over four months pregnant with my mother in her wedding photo, her loose gown hiding her thickening waist and swelling breasts. My grandparent’s physical affection was obvious during their sixty-year marriage, even when he was in his eighties, but premarital sex? My proper grandma? It couldn’t be. 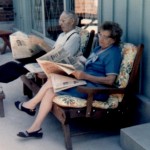 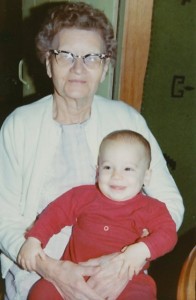 I called my brother and cousins to tell them what I’d discovered. No one had a clue.

For some reason I cannot name, my heart swelled with delight imagining sweet Grandma succumbing to passion in the backseat of Grandpa’s car. Even in 1914, a straight-laced and docile unmarried Lutheran girl found a way to break the rules.

Have you discovered family secrets in inherited boxes of photos and papers? For stories about my paternal grandparents, see Safe in the Great Mother’s Bed and How I Learned to Trust a Man. Meanwhile, I’ll keep looking for secrets since I recently received an overlooked box of photos my mom had saved. There’s sure to be something interesting in there.