How My Dog Taught Me the Power of Ritual 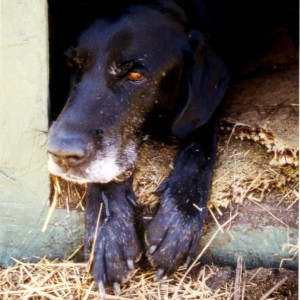 Our ten-year-old Lab left the car reluctantly. Instead of running ahead and waiting on the dock for us to throw a stick, our water boy stood near the car door without a wag.

“He has cancer,” the vet said a few days later. Leo wasn’t in pain, so we took him home, hoping for a few good weeks.

Ten years earlier, we chose the biggest male in a litter of Labs, the pup with scratches all over his round pink belly from climbing over the fence. Leo was a swimmer and diver, a fetcher and explorer, a woodchuck destroyer and a family guardian. 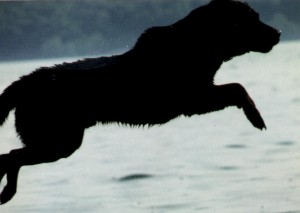 A month after the vet visit, Leo stopped eating. One morning, he circumambulated the house, down around the barn and out to the garden, around to the front porch and then to his doghouse near the back porch. He stopped to rest a hundred times, but he stayed focused on his journey.

“Hey, Leo. You feeling bad, boy?” I said when he returned to his dog house. His tail wagged half-heartedly, but his eyes were dull. I cooked him scrambled eggs, but he turned his face away.

“We have to take him to the vet tomorrow,” I said. “He’s suffering now.”

We coaxed Leo inside the house. Friends dropped by to say goodbye. Late in the afternoon, Leo tried to get up and fell back. I couldn’t find a pulse. He was gone, just like that. 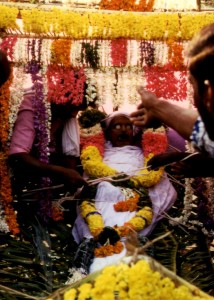 Vic and I had visited India three times. Funerals were part of life on the streets there. With the family’s permission, Vic had photographed a flower-covered cart standing outside a tiny earthen house. A dead man lay in the cart with coins over his eyes.

“We’ll give him his last journey,” the man’s brother told us, smiling and wiping away tears while he fussed with the flowers. A small parade of people gathered to accompany the man to the cremation ground.

Vic and I rolled Leo in a blanket and left him in the house while we dug a deep hole near the garden. The soil was black and loose. 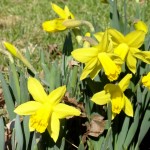 “Let’s take Leo for a last ride,” Vic said. “Like India. I’ll get the wheelbarrow.”

I picked daffodils and gathered bones, dog biscuits, and dog toys. We lifted Leo into the wheelbarrow. While I walked alongside like the grieving family members in India, Vic pushed Leo to his favorite spots—the dog house, the back porch, the front porch, the compost heap, until the journey ended at the deep hole near the garden. We tucked Leo in with bones and flowers. The earth would be his blanket. 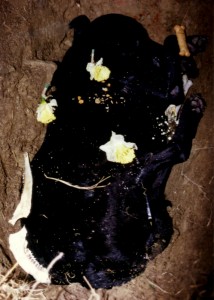 Quietly and solemnly, we shoveled rich loam over his body and smoothed the earth. As we worked, we paused and told our favorite stories about the woodchuck devourer and wild Seneca Lake diver, the sweet snuggler and avid eater. We wept, added more flowers and soil, and kept talking to Leo.

That day, I learned how to comfort myself with simple personal rituals.

Leo taught us the power of a homemade ritual to soothe and comfort grief. I’m grateful to Michelle DeHaven Nichols, non-profit founder and Executive Director of AHELP Project whose mission is to promote hospice philosophy as a paradigm shift in care for animals in age, chronic and terminal illness. Visit the website if you’re a pet lover. Michelle’s interest in ritual and grief reminded me of Leo and his end-of-life ritual. I’d love to hear about your experiences with helping your pets die. For other stories about family dogs, see Goodbye, My Miss Daisy. For other articles about ritual, see Creating a Grief Ritual. If you’d like to know more about creating personal ritual, you’ll enjoy my TEDx talk.