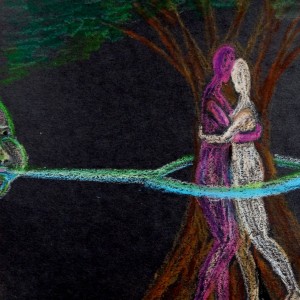 “You likely have cancer,” the oncologist said to Vic.

With those words, my husband and I landed in a world of crisis care and lost dreams.

I was (and still am) part of a women’s mythology class that had worked together since the late 1980s. A class member suggested we read the myth of Orpheus when she saw a copy of Rainer Maria Rilke’s Sonnets to Orpheus in a bookstore window. 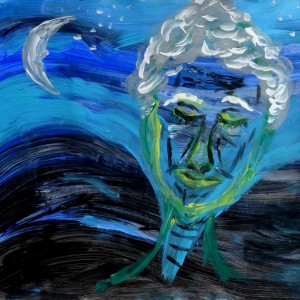 Orpheus was a demigod, musician, poet, and prophet in Greek mythology. After his beloved wife Eurydice died, he traveled to the Underworld to play his lyre, sing his grief lament, and gain his beloved’s release.

The beauty of his song convinced Hades and Persephone to grant Eurydice a return ticket to life, but Orpheus was told not to look back at Eurydice until they were in the Light. Being partly human, he glanced back and lost his Love forever to Death.

I understood the need to look back.

For over two years, while Vic was ill and after his death, we read various translations of the fifty-five sonnets, studied different versions of the myth, and painted Rilke’s poetic images—the gust of the god, a tree, a lyre. Rilke helped me practice the philosophical ideas I’d studied for years.

We are always surrounded by impermanence, but we look the other way. Everything we know shifts and changes, moves and transforms. The beauty of a sunset or a flower relies on constant transformation. So does mortality.

Ah, the knowledge of impermanence
That haunts our days
Is their very fragrance.[i] 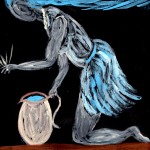 I read Rilke, made soup, accompanied Vic to every appointment, and paid attention. In the chemotherapy infusion room, I noticed bald women, stooped men, and defiant teenagers trying to balance their harsh experience with a call from a friend, the smile of a nurse or companion, or music on their iPod. All of us had landed in a strange world of toxic treatment and unexpected complications. Loss couldn’t be ignored, so we reached out for an antidote.

Rilke’s words helped me see that I could do more than be battered by this threat. This shattered life was our particular slice of experience and we had no choice. It could break us, or it could teach and strengthen us. Maybe both. 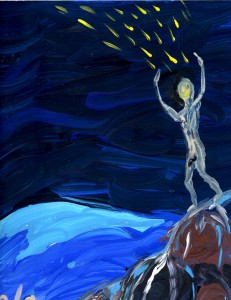 Let this darkness be a bell tower
and you the bell. As you ring,
what batters you becomes your strength.[ii]

Searching for life and light within the darkness became my practice. Whenever there was a lull in my day, whenever the anxiety and fear overflowed, before I fell asleep at night, I remembered. Death is part of every experience, including pleasure. As I devour an apple, I’m enjoying the death of the apple. As I swoon over a sunset, the day is dying. I am warmed in winter by the wood of a dead tree.

Within the container of this ancient myth, I knew our world was as much about living as dying. If I remembered and consciously noticed, I sometimes found splendor and mystery in the darkness.

But life holds mystery for us yet. In a hundred places
we can still sense the source: a play of pure powers
that—when you feel it—brings you to your knees.[iii]

What helps you gain a strong footing in uncertain times? My paintings and drawings came from mythology classes. We first worked on understanding a sonnet and then drew an image from that sonnet. I write more about mythology in Leaning into Love: A Spiritual Journey through Grief. Some of the ideas in this post were shared in a guest blog at Matrignosis called Mythological Healing in Times of Crisis. For another blog about finding support from poetry, please enjoy Poems to Grieve By.