How I Learned to Trust a Man 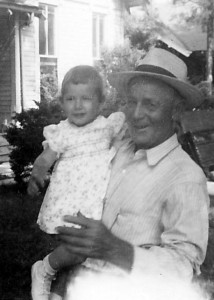 Grandpa Ware smelled like cinnamon toast, steaming cow pies, and brown soap. His wrinkled cheeks were soft against my face if he had shaved or scratchy when he hadn’t. He covered his wispy white hair and sun baked face with a big straw hat. Outside, he wore tall rubber boots to foil chiggers as he made his way through the barnyard. Inside, he wore ancient scuffed leather slippers. His devoted mutt Poochie followed him everywhere, sleeping on Grandpa’s feet or padding behind him to the barn or garden.

I trusted Grandpa’s quiet raspy voice, his careful calloused hands, and his kind words that never hurt or scolded. He was the first in a long line of gentle men who taught me how to trust a man’s words and hands—my dad and Uncle Jim, my big brother, and later my husband Vic and our sons David and Anthony.

Grandpa’s brown eyes lit up when he swept me into his arms and carried me close to his heart. His shirt pockets smelled of Red Man tobacco and butterscotch drops. I perched on the back of his milk cow while he squatted on a three-legged stool below me, milk splashing into the sides of the metal bucket with even rhythmic squirts. Sometimes, he helped my little hands coax and pull the milk from the warm fleshy teats. 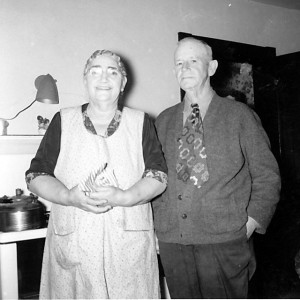 In the spring, Grandpa waited to feed the abandoned lambs until his grandchildren arrived for Sunday dinner. Two or three curly critters bleated in the dooryard and pushed against our legs. Grandpa sat on a porch step, braced my back against his belly, and held me tight as a wooly white lamb pulled on the bottle, yanking me forward with a fast fierce suck.

Grandpa was a surveyor before I was born. He traveled to Chicago around 1910 and met and married my Dutch grandmother. When his parents died, Grandpa brought his city bride to the sagging farm with an outhouse out back and a water pump in front. The farm was ten miles from Mexico, Missouri, that is, ten miles from nowhere.

On Sunday nights after Grandma’s dinner of crisp roasted chicken, baking powder biscuits and giblet gravy, peas and corn fresh or canned from the garden and smothered in home-churned butter, and apple or peach pie, Grandpa took out his false teeth and played his harmonica while Grandma played the piano. She was a classically trained musician and took the lead, but he kept up, tapping his foot and wailing on his mouth harp with his head tipped to the side and his body rocking to ragtime or a spiritual.

In winter, he carefully poured black chunks from spouted buckets into the coal stove in the dining room, trying to keep the dust from flying toward Grandma’s hand crocheted tablecloth. In summer when it was sometimes 100 degrees, we sat under the shade of catalpa trees. Grandpa and my dad took turns hand churning ice cream made with the cow’s thick cream, peaches from the orchard, and ice from the icehouse.

In the evening, the grown-ups played cards in the parlor—canasta or gin rummy, but never bridge—while I caught fireflies and played hide and seek with my brother and cousins. There was no alcohol. Grandma was dead set against liquor and no one dared challenge her rule.

Grandpa died of a stroke when I was only 9. In the weeks after his death, I felt his love and safety surrounding me as I fell asleep at night. When I was a young woman, I always knew how to read a man’s intentions and protect myself. Grandpa was my first teacher.

What did you learn from your grandfather? For other posts about the supportive men in my life, see this story or this one. Thanks to my cousin Jack Ware for sharing his memories.