Solstice Blessings: A Family Ritual of Remembrance and Love 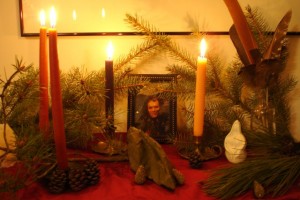 On the shortest day of 2009 when my sons were home for the holidays, I took a clipper and cloth bag on my morning forest walk and gathered evergreen boughs and pinecones. I picked up small chunks of shale and granite and some acorns, too.  At the house, I emptied my bag on the dining room table next to a few candles and a photo of my husband Vic who had died 18 months before. Then I waited.

“What are we doing with this stuff?” my son David asked as he inspected my treasure.

“I thought you guys might build an altar with me, maybe light a few candles.”

I felt shy, afraid they would think my idea was silly or sentimental, but I needed to balance the grief I felt with Christmas coming.

“Let’s do it,” David said with his big hearted enthusiasm.

He called his brother Anthony while I laid a red cloth on a cabinet near the front door. Taking turns, we added pine and spruce branches and placed candles in front of the greens. We placed stones and then scattered pinecones and acorns, arranging things just so. 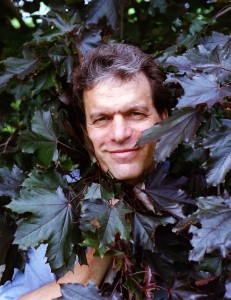 “And this?” Anthony asked, picking up the photo of his dad. I’d chosen a photo of Vic peering out from foliage. I found it in the back of his desk the Christmas after he died. It was the last print in a packet of promotion headshots that I had taken eight years before for Vic’s second book. Tired of posing, he slipped beneath the red maple branches and peered out at me.

“Let’s put the photo behind the evergreens,” I said, “so we have to pay attention to notice it. It will be here but not easily visible, just the way your dad is in our lives now. Is that OK with you?”

“Of course,” they said, so I tucked the picture behind the evergreen boughs. From the photo, Vic’s eyes gazed out at the three of us, the fourth member of our family circle watching from the other side.

“Let’s say what we want to release and what we hope for this coming year,” I suggested. “Or you could just light a candle and not say anything.” I still wanted to give them a way out.

Anthony went first, silently lighting a candle and wiping his eyes with his shirtsleeve. David was next, carefully describing what he wanted to leave behind and add to his life before lighting his candle. Anthony thought better of his silence and spoke his heart’s desire before he lit a second candle. 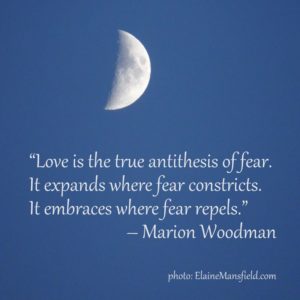 “It’s your turn, Mom,” David said.  I took a slow breath and lit my candle.

We repeated our Solstice Ritual of Remembrance in 2011. This year, I’ll add a Rumi poem that helps me feel connected with my beloved who is far away.

Your body is away from me
But there is a window open
From my heart to yours.
From this window, like the moon
I keep sending news secretly.

I’d love to hear how you remember those you miss. For other posts about creating personal rituals of remembrance, see Flowers for the Living, Flowers for the Dead and Creating a Grief Ritual.