Falling in Love with Marion Woodman: 2003 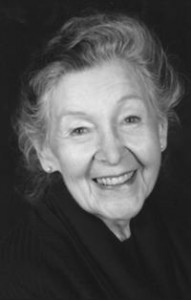 “Who do you want to see more than anyone?” my husband Vic asked in an excited voice. It was unusual for him to call from his office in the middle of a work day.

“Come on, you told me last week you wanted to see someone. Who?” His voice oozed with his secret.

“Yeah, Marion Woodman. Guess what? I’ve been invited to teach with Marion in Toronto. I asked if you could come, too.”

“I knew you’d be happy,” he said. And I was happy—at that moment. 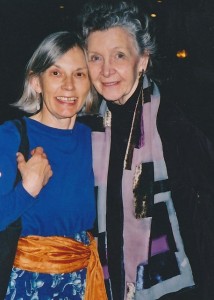 Elaine and Marion Woodman after a workshop: 2003

A few months later, Vic and I sat in a ritzy restaurant in Toronto with Marion and a group of professors from the University of Toronto. Vic, Marion, and her husband Ross would present a symposium the next day, and since Marion had never met Vic, they were seated together at one end of a long table set with fine China and cream colored linens while I sat at the other end with strangers.

Of course, Vic and Marion needed to get acquainted before standing on a stage together. Besides, Marion barely knew me, so why should I be seated with them?

Down the length of the table, I had a clear view of Marion and Vic. They leaned toward each other, catching each other’s words like lovers, stage lit from above by a glowing soft spotlight. Vic’s brown eyes were glued to Marion’s face like a schoolboy in love with his teacher. Her thick gray waves framed blue eyes that sparkled from her expressive face. Her hands painted patterns in the air. Vic barely touched his gourmet dinner, this man who loved nothing more than a well-prepared meal.

Instead of listening to the conversation around me, I watched Marion’s hands and longed to move to the other end of the table. Politeness kept me where I was.

Jealousy arrived somewhere between the pasta primavera and the crème brulee. “I’m the one who went to Marion’s workshops. I’m the one who studied her books on Jungian psychology and mythology and absorbed her lessons about body, dreams, and the imagination. I’m the one who read underlined passages from her books to Vic to give him a better overview of her work on the Sacred Feminine. Why is Mr. Sunshine sitting in the spotlight just inches from my teacher’s face while I’m banned to the outer darkness?”

That night in the hotel, while Vic slept the sleep of the charmed, I sat on a towel on the tile bathroom floor, furiously scribbling complaints into my journal. “How did this happen? Why was he next to Marion and not me? Why does he get all the attention?”

I knew why. He’d written two books about Jungian psychology and physics. He was a professor with credentials. Marion was interested in his work. I wanted to squash him and his achievements.

As I stewed and spewed, an inner infuriating voice of reason pointed out that even though I had read Marion’s books and freely used her ideas and even though I attended a few of her teaching weekends with hundreds of participants, I had not committed to being her student. “You should be grateful Vic brought you into close contact with Marion,” this insistent voice pointed out. “You didn’t make the effort.”

Shivering with exhaustion, I realized it was not too late to become Marion’s student. It was nearly dawn when I closed my notebook, turned out the bathroom light, and crawled into bed next to Vic. Over breakfast, I planned to thank him for helping me see what I’d neglected. Then I would sign up for Marion’s next BodySoul Rhythms Intensive.

Is there still time to do something you’re putting off or avoiding? You might enjoy these other blogs about my teachers: Befriending Myself: Rescued by Pema Chodron and Zapped by the Dalai Lama. Check out this brief video clip of Marion.