The Sky Above, the Earth Below 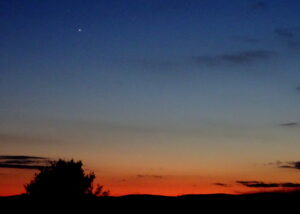 On clear nights, Venus sparkles in the indigo sky. She’s been a bright evening star since early October. In late November and early December when she’s highest in the sky, I’ll stand at the windows on clear cold nights and soak in Her beauty. I’ll scan the southern sky for glowing Jupiter and pale Saturn traveling in the same planetary arc, quietly cycling above Earth’s chaos and confusion. 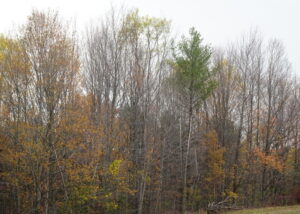 In my earthly home, the ground is saturated from months of rain. Crumpled maple leaves fall brown and blighted, replacing the usual autumn reds. Next year’s maples may recover, but climate crisis feels close after a summer of fire, flood, and infestation.

The giant oaks grew small new leaves after gypsy moth caterpillars stripped them bare in June. New leaves promise survival for the trees, but oaks can’t replace the acorns with a second crop.

What will the wild turkeys eat this winter? How will squirrels, rabbits, and red fox survive? And the blue jays and deer? Emaciated does will abort their pregnancies and reabsorb fetuses to survive.  It’s a wise plan, but a desperate maneuver by nature. Some deer won’t make it, but the strong will get by on stored summer fat, tree buds, hickory nuts, and grasses unless there’s a deep snow pack. 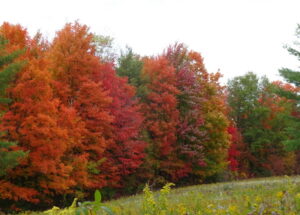 Maple hedgerow 2020 and most years

Earth’s inhabitants teeter between life and death while I hang on to hope we’ll wake up and save our planetary home.

In late December, Venus will drop beneath the horizon and by January, she’ll be an eastern morning star rising while I sleep.  Jupiter and Saturn will become morning lights, too. Even though I won’t see them over the forested hill east of my home, I love knowing they’ll be there. 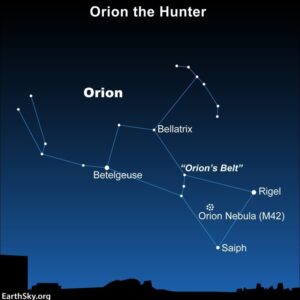 When I look out my bedroom window at 4 am in early October, the constellation Orion beams in the southern sky with His bright stars Betelgeuse and Rigel. I remember Vic’s admiring voice saying, “Dig the belt.” We loved watching Orion each winter. East of Orion, Sirius is the brightest star in the night, associated with the Egyptian god Osiris and the yearly flooding of the Nile. Separated and quarrelsome as humans are on this earth, we admire the same constellations, planets, and stars. 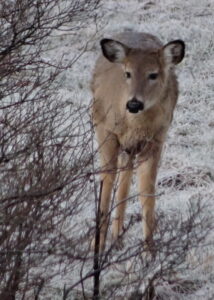 The deer will live or starve depending on the winter cold. The unborn fawn may die to keep its mother alive. Next year’s autumn leaves may be drab or maples may be red and oaks loaded with acorns.

Still, no matter what we confused humans do, we can count on the heavenly rounds. As the climate goes mad and life struggles to survive, I look up on clear autumn and winter nights, comforted as the Moon, stars, constellations, and planets watch over me. 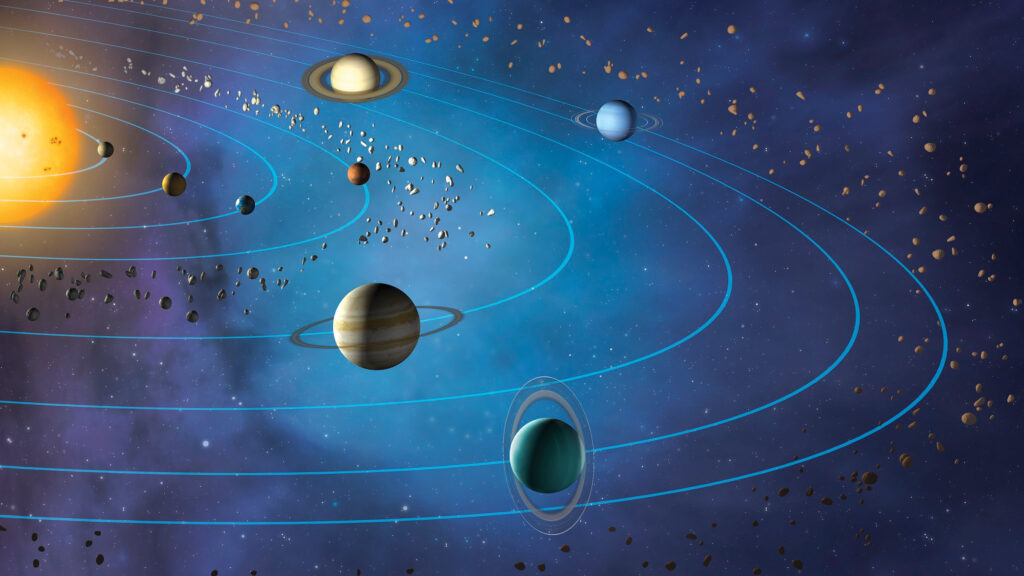 My husband Vic was an astrophysicist, so maybe I caught the night sky bug from him, but more likely it’s because I live far from light-filled cities and have large windows to the south and west with year round views of dark night skies. I turn down the lights in my house, watch the sky, and feel my place (and insignificance) in the cosmic rounds. Can you see the night sky where you live? How does it make you feel? Do you know any of the constellations by name? For other posts about nature see Transformation: The Season Is Changing and So Are We or Healed by Nature, Inspired by Love.