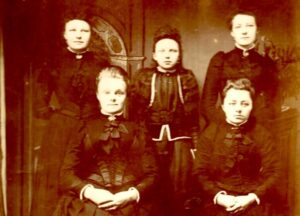 Who were these stern faced women dressed in black? Did they find joy in marriage or in staying single? Were they worried at night about their children and the crops? Did they write letters to family left behind when they immigrated to America?

It’s comforting to know the names of six generations in my female lineage and have photos of five generations. I wish I knew more details about their lives. 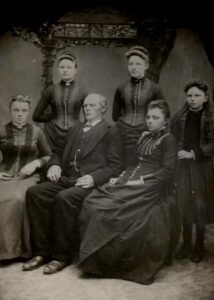 I inherited an undated group portrait of my great-great grandmother and her daughters including Doris Henriette, my great grandmother, all with white lace collars, tight thin lips, and rigid faces needed for 19th century photographs. The oldest daughter Mary isn’t in this photo. Was she married by then?

In another photo, their father Hans Ingwersen sits upright and stiff in his black vested suit decorated with a white collar and gold watch chain. He’s surrounded by five daughters, including my great grandmother Doris and the oldest sister Mary.

Anna Maria and Hans emigrated from Denmark in 1881 after Prussians invaded their area of Schleswig-Holstein, now the northern tip of Germany, and drafted young men. Both Hans and his brother immigrated instead of fighting for the Kaiser. Were Anna Maria’s feelings considered or did only men decide? 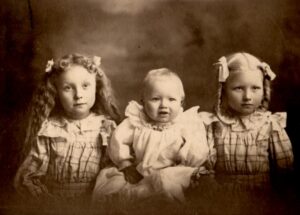 Grandma Margaret on the left, 1902

They settled in Ohio where my great-great grandfather and his brother bought farmland. They prospered because of rich deep topsoil, hard work, and thrifty habits, but faced prejudice as German-speaking “krauts.” Austere tee-totaling Lutherans, I imagine them when I see Mennonites in my area now.

My middle name Margaret goes back to Margaretha Elizabeth in Denmark, but there’s no photo of her and the record stops there. A sketchy history was written by my Grandma Margaret on the back of old photos, but she didn’t tell stories and I was too young to ask questions. The women grew gardens, made cheese, and baked dark brown bread and cherry and peach pie. They raised rabbits and chickens and butchered them for Sunday dinner. As girls, they learned to sew the clothing by hand and do needle work. On Sunday, they traveled by horse and buggy to meet with other Lutherans for church and a communal meal. 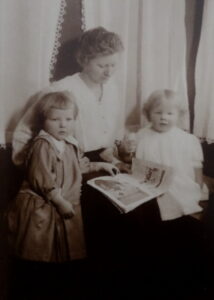 Grandma Margaret with her daughters, my mom on the left

These women gave birth to many children, some who lived and some who died. They nursed and grieved, pumped water from the well, and scrubbed the laundry including diapers on washboards. Even children helped plant and weed, can the harvest, and drag potatoes and parsnips into the root cellar. They cared for the sick and elderly who died at home. I know from my grandma that they loved each other and stuck together. 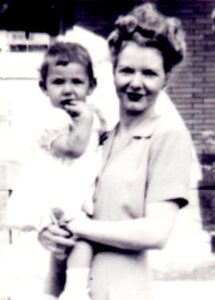 Like them, I gave birth and nursed my babies, tended the sick and dying, grew vegetables and flowers, carried firewood, and stayed strong despite loss. Grandma loved Bleeding Hearts and my great-grandma loved them, too, so I grow a tough perennial Bleeding Heart near my front door to honor the legacy of resilience left by these women. Since I have two sons and no daughters, the lineage ends with me. 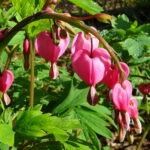 How far back can you name your female lineage? There are often men’s names, but not women’s. I also learned from the heart-breaking history of friends how knowledge of their lineage ended abruptly for Jewish friends in the European horrors of World War II. For other articles about family, see My Grandma’s Juicy Secret which is also about my matriarchal lineage. I wrote about my paternal grandmother in Safe in the Great Mother’s Bed.