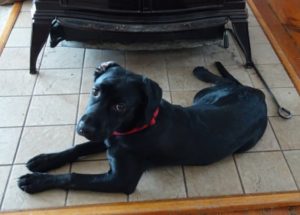 Disco staying warm on the hearth at 5 months

I’ve had dogs all my life, so I should know how to raise them. The God Pan brought me a litter of six black pups and said they could be trained to hunt lions. I chose the one that crawled on my lap and stayed to snuggle. A black female with a white streak on her chest.

I consulted with my sister Goddess Hecate about taking on a puppy. She always has black dogs at her side as she travels in the night and they’re well trained. 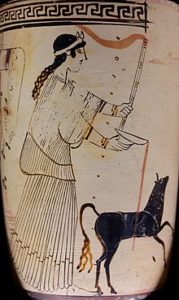 “Do it!” Hecate said. “It’s a challenge you won’t regret.” Since Hecate is Goddess of the Crossroads and sees from every angle, I trust her.

The pup came home last week, riding on my lap while my friend Lisa drove her chariot. I like solitude, but it’s good to have a helper and friend around with this pup. Every loving and protective dog begins as a rascal who eats the plants and digs deep holes.

I haven’t had time to write in my diary and hardly have time to take a shower or eat breakfast. We finally found the right name for this little fireball. Disco. She needs lots of snuggling and hates cold. I like to be outside in the forest, but she shivers. Maybe I should give her to Hestia, Goddess of the Hearth since Hestia is always near her fire, but I’m too attached to Disco to give her away. Besides, I like the warm hearth, too. 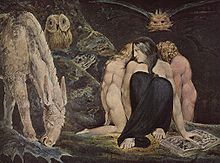 I talked to my sister Hecate again about house-training. Hecate says I expect too much. Since I’m the Goddess of the New Moon and Hecate rules the Dark of the Moon, she’s my elder who travels all the worlds. She knows. Hecate reminded me that I’m impatient.

We started training classes and Disco can do a few basics when there aren’t distractions. There are always distractions. She’s easily overwhelmed by noisy places—but since I’m overwhelmed by the noise of civilization, she may be responding to me. I like quiet and the forest, far from human cacophony. 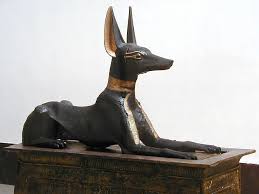 Hecate suggested I talk to the Egyptian Dog God Anubis who also has short black fur and get his advice about keeping her warm. I’ve never had a dog without a thick undercoat, but Disco’s fur is thin since she was born in the south. She’ll have to get used to cold winter winds.

Anubis rolled his eyes when I told him she shivers in the cold. “Get her a sweater,” he said.

“But she’ll tear it off with those sharp little teeth.” 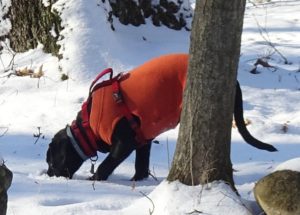 “Maybe,” Anubis said. “Feed her treats while you pull it over her head. She’ll probably love it, but I’m not sure because it’s not cold in Egypt.”

Disco loves her orange sweater and we take long walks in the forest now. She’s a fan of sticks and deer poop. She’s house trained and rarely tears anything up. I take her to doggie day care twice a week because she needs more supervised play with dogs and I need time off. 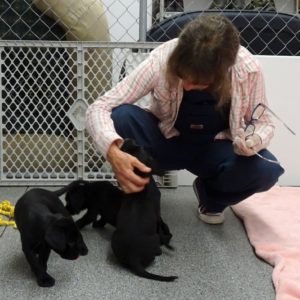 Barb Cook, our trainer, with Disco when she was 6 weeks old

A dog-training initiate–Barb Cook who introduced me to Disco in September–came to my house for a private lesson. Barb taught me positive training tips, including using a halter with the leash clip on the chest. No more pulling! I’m a slow learner with a clicker, so I need lots of practice. Disco catches on fast. Four feet on the floor. We’ll get this.

Hecate says I should stop worrying. The Goddess of the Darkest Night says, “Just love her and keep her close and warm. Teach her how to be polite and give her treats. Relax.” 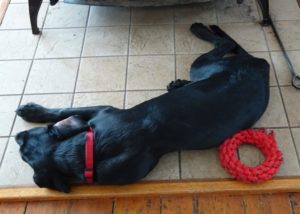 May we all be warm and sleep well. My ten-year-old Willow shares the hearth with the pup, plays and snuggles with her, and shares the toys. I expected this to work, but not as well as it has. By 6 pm, Willow needs quiet time so that’s arranged with door gates.

Have you taken on a demanding project and needed help to succeed? Does your experience feel like the unfolding of a mythological story or a legend? For other posts about adopting Disco, see Inspired by Artemis, Lured by Joy. For a post about relying on a dog for grief support, see A Dog’s View of Life and Death.