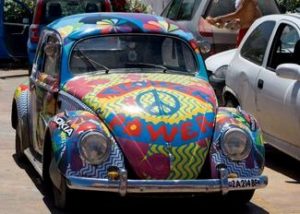 “That’s a whole year,” Vic said. “They drafted our friend Jeff and he’s dead. They took your friend Robin and turned him into a front line medic. Who knows what horrors he’ll see?”

We lay on our backs in the dark on Vic’s double bed. Rain drummed against the windows of his small apartment on Seneca Street. Streetlight reflections lit the unpaid bills on his desk. We were buzzed by the “Hell No, We Won’t Go Rally” we’d attended on the Cornell campus that day. A big metal trash can, filled with paper and dry wood, flamed amid a wild cheer. The boys and men walked forward one at a time to drop in their draft cards. Many signed a pledge. 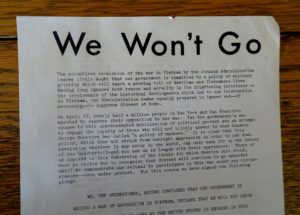 Our hope-filled ritual couldn’t save the young men from what came next if they drew a low draft number. A key campus organizer was drafted a few months later and chose jail. We’d seen others go to war, sometimes to their death but always to the end of innocence.

“So what can we do?” I asked. Vic always had ideas. 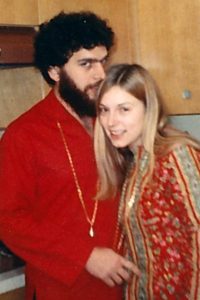 “I can’t think of anything besides Canada,” he said. “I think I can get in graduate school since I’m almost done with my course work, and I have relatives there. I’m sure I don’t want Vietnam or jail.”

“I’ll go anywhere you need to go,” I said. We’d had a close brush with jail earlier that year when we took medical supplies for South and North Vietnam across the border to Canada with a Quaker group. We knew then we wouldn’t choose jail if we could avoid it.

We hadn’t decided to marry, but were committed for life. “I’ll stay in graduate school until the government makes a move,” Vic said. “Maybe we’ll get lucky.”

“I’m ready to leave,” I said as I rolled toward him and touched his face. “I want to be with you.” 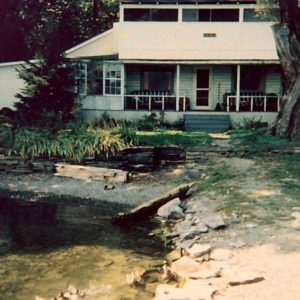 Vic drew a high draft number and didn’t get drafted or go to jail. We kept protesting the war in Ithaca, New York City, Buffalo, and Washington, DC, always grateful for our escape.

We moved to a beat-up cottage on Cayuga Lake after our May 1968 wedding and led encounter group weekends filled with free-wheeling psychological exploration and psycho-drama or acting out scenes with others playing roles of parents or lovers or teachers. Vic and I learned to be honest even about hard things.

We missed the Woodstock Festival on August 15, 1969 because we’d already advertised a group weekend and couldn’t cancel. I was secretly relieved. Even then, I didn’t love crowds, blaring speakers, and long bathroom lines. 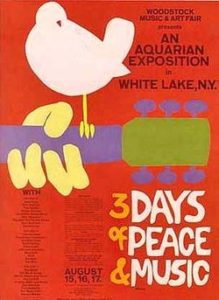 “By the time we got to Woodstock
We were half a million strong
And everywhere there was song and celebration
And I dreamed I saw the bombers
Riding shotgun in the sky
And they were turning into butterflies
Above our nation
We are stardust
Billion year old carbon
We are golden
Caught in the devil’s bargain
And we’ve got to get ourselves
Back to the garden” ~Joni Mitchell, “Woodstock”

In Ithaca or at Woodstock, these were our people. This was our culture, our music, our lyrics. “We had to get ourselves back to the garden.”

How have you joined with others to make our world a better place? At heart, I’m still part of the Woodstock Generation. We didn’t fulfill our lofty values as we hoped, but it was the beginning of a conscious opening of my heart and a longing for peace, compassion, and nonviolence. For a few years, it all seemed possible. Maybe it still is.

For a post about our first anti-war protest with Quakers, see Make Love Not War: 1967. The last time I went to a large protest that wasn’t in my home state was January 2017. Vic would have been at my side if he were alive, but it was exhilarating to be there with good friends Jane and Roger and feel hope and solidarity with hundreds of thousands of others. I wrote about it in Giving Hope a Seat Between Anxiety and Grief: Women’s March on Washington. Let’s keep hope alive.