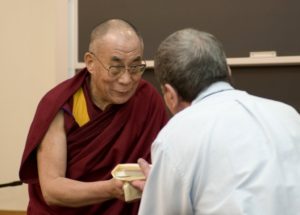 “I’m afraid to die,” Vic said. His raspy voice was soaked with despair. I rubbed his tight shoulders while he leaned into me, his head resting against my heart.

“I meditated and studied with wise teachers for forty years. Why am I afraid?”  I listened and loved him as he struggled. I hadn’t faced my own mortality or been around anyone who openly grappled with their tension between faith and fear.

Our doctor and friend Michael talked to Vic about the body’s inborn desire for life. “Can you take that scared part of yourself in your arms and comfort him?” Michael asked. Vic tried.

He’d approached cancer without self-pity or drama, plunging ahead with hope through chemotherapy and a stem cell transplant. That changed September 2007 when he noticed an angry rash on his drive home from teaching. 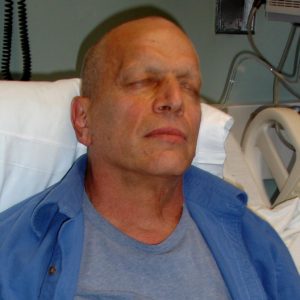 His eyes were wide with terror when he showed me his blotchy thighs. I took a deep breath. The rash hadn’t been there that morning.

“We’re not sure what it is,” oncologists said after weeks of testing, experimental medicines, and confusing test results. Was it a drug reaction or a new manifestation of his rare lymphatic cancer? The rash moved from his thighs to his whole body and he began to swell like the Michelin man.

“Take him to the hospital for an EKG,” Michael said.

The hospital cardiologist suggested IV diuretics. Michael and I protested. Vic protested. Vic’s oncologist in Rochester said to go ahead. It was all guess work.

Half an hour after the infusion began, Vic’s skin turned pale sick green. Then his heart went into ventricular fibrillation. I refused to leave the ICU room and witnessed as they intubated him with fierce efficiency and shocked him back into life a dozen times over the next few hours. Between shocks, I held his feet. Friends and family gathered to meditate. That night, I tapped a heart rhythm into Vic’s limp palm, hoping his body would remember. 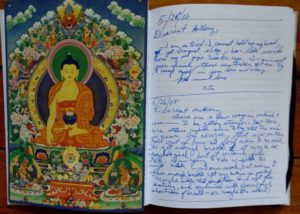 The next morning, after Vic was moved to the hospital where he was being treated for cancer, cardiac arrests stopped. No one knew why.

“He’ll have amazing stories to tell,” I said to our sons as doctors took Vic off life support. I imagined long tunnels ending with white celestial lights, maybe an angel or his grandmother.

For days, Vic didn’t remember and then he did. “It was black,” he said. “I threw my hands up in the air for help and felt terror.”

“Oh.” That’s not what I hoped for, but he was alive, physically weakened but mentally fine.

Vic turned toward fear and wrote about it. I asked questions, listened, and witnessed as he wrestled with his dark angels. He wrote in his journal at night while I slept. 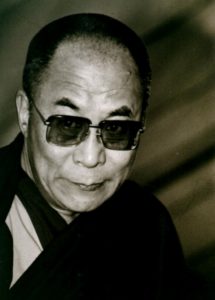 Dalai Lama in a serious mood (photo by Vic Mansfield, 1993)

At the bleakest moment, Vic received an email saying the Dalai Lama’s office had moved His Holiness’s visit to Colgate University where Vic taught to spring 2008 instead of 2009 as previously planned. Vic was asked to teach with the Dalai Lama and present him with his last book which the Dalai Lama had asked him to write.

I focused on keeping Vic alive a few more months.

In May 2008, audience in their seats, Vic began the Science and Religion symposium by thanking the Dalai Lama for a lifetime of inspiration and guidance. He moved closer to His Holiness to offer a copy of his book Tibetan Buddhism and Modern Physics: Toward A Union of Love and Knowledge.

The Dalai Lama opened his arms wide like a mother and held my sobbing husband. I was stunned. And grateful. 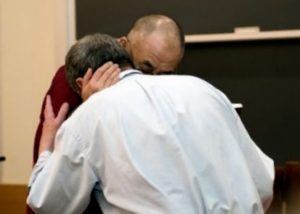 Vic gave an unashamed little boy grin to the audience before the warrior surfaced one last time. He sat down briefly, popped a cough drop in his mouth, and stood to give a powerful talk about physics and Buddhism, making sure the Dalai Lama understood every word.

“I can die now,” Vic said after two days with the Dalai Lama. “Fear left when he held me in his arms.”

For five weeks, Vic meditated on a photo the Colgate photographer took of that hug. The image hung on the wall next to Vic’s bed. As I prepared to drive him to the hospital for help with another breathing crisis, I grabbed the photo. 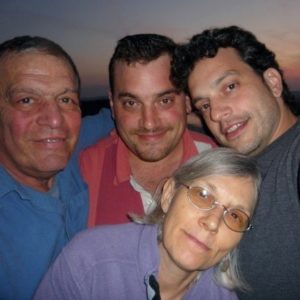 Vic died a few days later with the photo hanging on the hospital wall. We were not afraid.

People often experience grace when facing death. It comes in various forms–or doesn’t come at all. I’d love to hear your experiences. I wrote all the details of this experience in my book Leaning into Love: A Spiritual Journey through Grief. It changed my view of conflicting feelings that come with illness, death, and heartache.

To learn more about Vic’s relationship with the Dalai Lama and his writing and teaching in Jungian Psychology, Buddhism, and Physics, see his website Vic Mansfield: Science, Psychology, and the Sacred. I suggest the media page at his website which includes a StoryCorp Interview, a short TV interview after seeing the Dalai Lama, his last talk at Colgate at the Buddhism and Science Symposium, and other interviews and talks.