I carry the glass jar outside to a shady patch of white asters. The earth smells musty and moist in rising heat. Too hot for late September, plus a south wind when the butterfly migration depends on winds from the north. There’s always some climate disaster to be alarmed about, so I bring my mind back to this pristine moment. 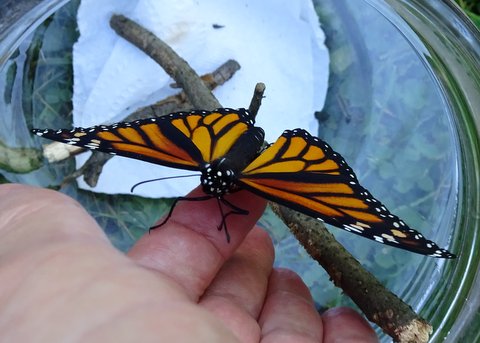 I lift the loose lid and extend a finger near the stick where the butterfly rests. It climbs on. Footsteps light and soft as feathers move toward my wrist. Its dry gentle wings caress my skin. It pauses with each step as it meets the world. 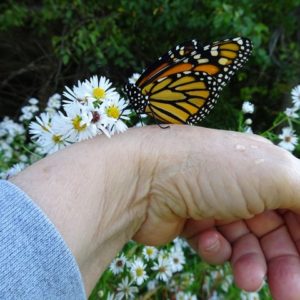 It clings and lingers as I move my hand toward the autumn asters, a favorite nectar plant. Exploring with its black antennae, it climbs a tiny flower cluster and waits.

I collected this beauty on a milkweed leaf, a tiny caterpillar, 3/8 inch long. I fed it and 15 others a daily diet of fresh milkweed leaves. Its caterpillar skin was cool and smooth, black with art nouveau gold and white stripes to warn birds away. In the field, ants, aphids, praying mantis, and disease ignore the warning.

On a windowsill in its glass jar, it devoured leaf after leaf with ravenous passion. In a few weeks it was 100 times larger than the little one I’d brought in. Then it stopped eating and dropping dung to hang from the lid in an uneven J. One day, two days. Until the caterpillar skin split and a magic pupa, green with glittery gold flecks, appeared. An exquisite jade jewel. 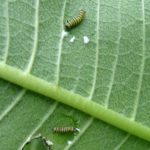 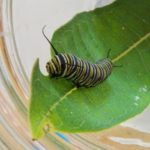 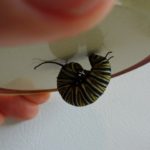 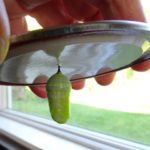 I waited. One week. Nearly two. I meditated on the living gem as it darkened. It blackened until I wondered if it was dead, but vibrant orange patches reassured me. I carried the jar from desk to kitchen to bedroom, hoping to see the birth. 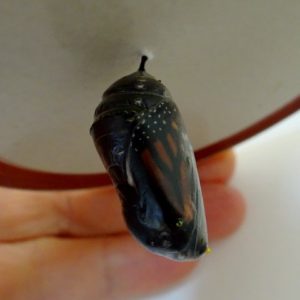 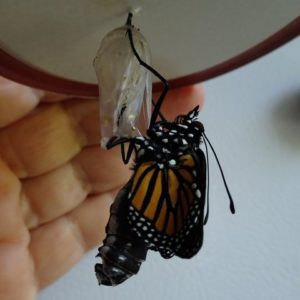 Late afternoon, it emerged in a snap. Splitting its clear fragile chrysalis that seemed too small for the body it held. It squirmed and wiggled, rotating on its silken thread. Scrunched and moist, it unfolded like an accordion in an abstract dance. First body, then wings, rocking and swaying to its own rhythm while little feet held it upside down. In a few hours, it opened its wings and beat them once, then twice. Then more. 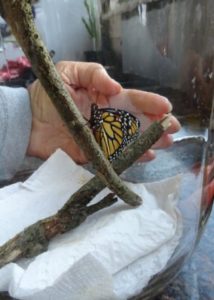 the pupa case, I turned the smaller jar upside down over a gallon jar with sticks inside. I was a midwife now. The Monarch dropped down, just like I’d hoped, and touched its world with black antennae. Slowly, ever so slowly, it traveled up the stick, wings opening and closing like geisha fans.

It hardly moved that night.

This morning, it flutters again. Time to set it free. Is the heat a problem? I decide it’s OK as long as there are lush patches of nectar plants. It will feed, fatten, and wait to ride south on the next north wind.

How can this featherweight magician fly 3000 miles to Mexico? 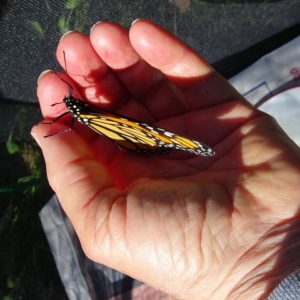 In nature, only 1-2% of Monarch eggs survive to become butterflies. I’m grateful to nurture this one and others I collected, the way Nature, my Divine Mother, nurtures me.

Like the butterfly, deep within, my Soul knows what to do despite my doubts. I see why ancient Greeks called butterflies Psyche, a word translated in English as Soul. 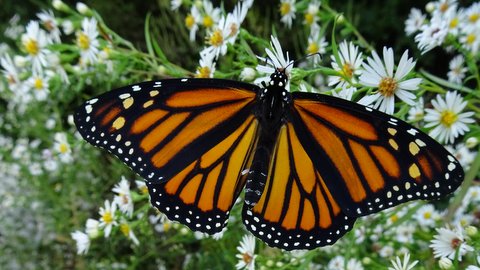 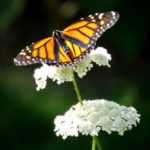 After writing this, I released nine monarchs one day and one more the next. The kids are on their own. Six weeks ago, I sank under the weight of caregiving, the state of the world, and more. In a blog posted then, I wrote I needed joy or delight. The next day, a stranger emailed saying she heard from a mutual friend that I have abundant milkweed on my land. She wanted a place to release Monarchs she’d raised. Yes!

I began inspecting milkweed leaves, searching for caterpillars. My Monarch Mentor shared tips for raising them. I found 16 caterpillars, fed them, and released 14 so far. The other two should fly in a day or two. My adventure helps Monarchs, plus I’ve learned so much about their beautiful transformations. The key word for me is Delight.

How do you create joy in your life? Does Nature bail you out of rough spots? For other blogs about nature and healing, see Planting Life at a Time of Sorrow or When the Bluebirds Fledged.