Planting Life at a Time of Sorrow 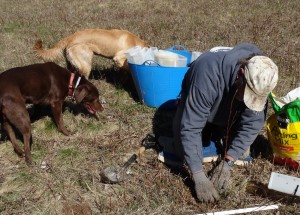 Matt Hoff with the gift of new life

My brother Jim seemed steady and a little stronger last week. There was talk of releasing him from the hospital to rehab, so I drove seven hours home to deal with what I’d left behind.

I needed to take my mother-in-law Virginia to the doctor. The day before I left to be with Jim, she was found at 5:30 am wandering the halls three stories up in her senior residence. She didn’t know where she was or where she lived, but a kind woman returned Virginia to her apartment. I arranged extra health aide hours, prayed for the best, and left town. 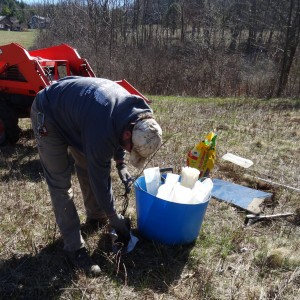 Back home for a few days, I had the snow tires removed, arranged more help for Virginia, and made an appointment to get the septic tank pumped. I also began packing to return to my brother’s side.

On Wednesday, before the septic truck arrived, my friend and helper Matt Hoff showed up with his two dogs. Willow ran joyous loops with Matt’s young dog Wilma. Matt had gifts for me, too.

First, he put the rototiller on the back of the tractor and tilled my vegetable garden into a loose loamy mix. Then he knocked on the door. 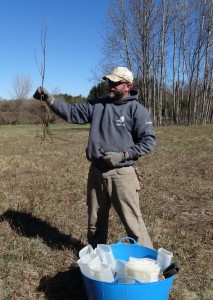 “Where do you want these trees?” Matt asked. He had thirteen blight resistant American Chestnut seedlings. I knew they were coming and needed to be planted with deer-protective coverings. Where did I want them? Something in me was too exhausted to make one more decision.

“Come outside,” Matt said. “We’ll figure it out.” I took a few deep breaths, pulled on my work boots and a wide-brimmed hat, and grabbed my favorite spade. We dug a few holes in the area I suggested. My frantic mind slowed down.

“Not here,” Matt said. “Too wet. Too much clay. How about over there?” He pointed across the field to another area we’d discussed. He knows every wet and dry spot on this land. 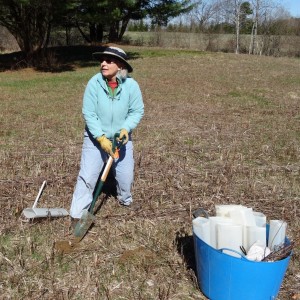 “As long as they don’t block the views,” I said.

I admired the swelling buds and healthy roots. My legs and back remembered how to angle the spade to break into sod and wedge out a rock. The earth was moist, but drained. I admired the squirming worms. Matt added potting soil to the native dirt to give the seedlings a good start. Then he planted the trees. I snapped photos. Matt is used to my camera by now, so he laughed and took photos of me digging.

I thought how happy my husband Vic would be to know we planted American Chestnuts made nearly extinct by blight. Matt snapped protective tubes in place. He did 90% of the work, but I was grateful to help a little. 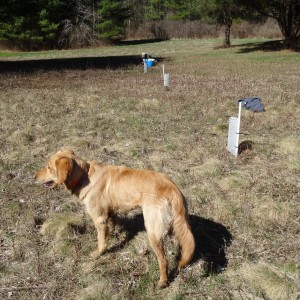 Late that evening, I raked the garden, laid out beds, and planted snow peas, lettuce, and Swiss chard. I protected the beds from hungry critters with wire hoops covered by mesh since I don’t know when I’ll be back home. It rained the next day, just what the seeds and seedlings needed. Another gift.

My brother is still in the hospital, but he’s growing weaker and can no longer speak on the phone. It’s time for me to return. Everything is in order at home. I even finished and scheduled the post you’re reading now. I feel replenished by Nature and prepared for what’s ahead–or as prepared as I can be to face the Great Mystery.

As the chestnut trees grow, I’ll remember that I trusted new life in my brother’s last days.

Even as the farmer labors
There where the seed turns into summer,
It is not his work. It is Earth who gives.[i] 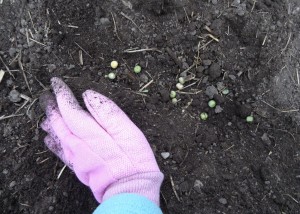 The week after my husband Vic died, my sons and I planted a vegetable garden. It seemed nuts and it was the perfect thing to do. What do you do to ease grief in times of sorrow? For other posts about working with Matt Hoff on my land, see My Mysterious Home. For an earlier post about my brother’s illness, see Soul Care in Hard Times.