Persephone: Finding Myself in Her Story 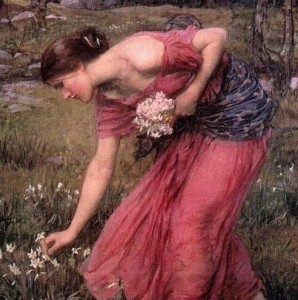 I wore a paper crown. Thick glasses concealed crossed eyes. My head tipped away from my mother, she who pretended everything was fine.

Just five, I felt cornered by a dark threat I couldn’t see or name. My parents didn’t discuss what we all felt. I didn’t know how to say, “I’m afraid.”

When I was ten, I began naming the feeling, at least to myself. By twelve, I knew death lurked around my dad. My parents kept their silent secrets as Darkness closed in. Dad turned yellow with jaundice and died when I was fourteen. 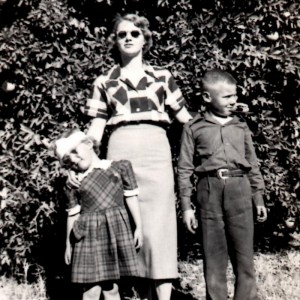 I didn’t know the myth of Persephone then. I hadn’t heard of the Underworld or the Great Below. I didn’t know Persephone’s mother Demeter mourned for her lost daughter and found a way to win her part-time release. I didn’t know Hecate and Hermes helped with the rescue.

Would I have recognized my own experience if I had been told Persephone’s story? Would it have helped me understand the threat–not rationally, but in a mythic way, in the language of image and soul?

Persephone, the maiden goddess of ancient Greece and her friends picked flowers in the Elysian Fields. I imagine her carefree and innocent, unaware of the threat as she reached for a beautiful narcissus. Suddenly, from deep below, from all around with no escape, a dark force snatched the girl into a black chariot and carried her to the Great Unknown. 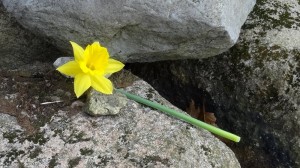 She was abducted by Hades (not to be confused with the Christian definition of that term). Some translations say she was raped. Others say she went willingly. A better translation for the word raped might be “taken,” but still…

She was forced into darkness when all she wanted was light. 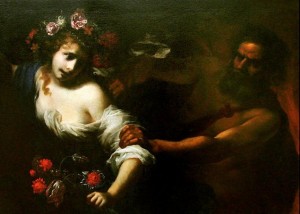 We’ve all been seized by helplessness and despair. For some, there is no escape. I think of those who live in war zones or with severe mental illness. It think of those who live with crippling disease or broken children. Like most of us, I’ve suffered periods of depression and despair. I’ve felt trapped and lost, confused and hopeless. Abduction by darkness showed up in many forms. 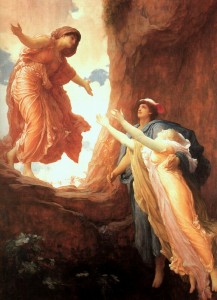 The Return of Persephone, Frederic Leighton, 1891

I didn’t know it was possible to keep one foot in the world of darkness and the other in the light. I didn’t know I would find wisdom in that darkness. And even comfort.

Were you introduced to mythology or old original fairy tales as a child or, like me, were you fed the Disney versions of the darker tales? Which stories stuck with you? Have you revisited them as an adult? Have you read these stories to children? After my brother’s death, I re-read Persephone’s story. Since my mother-in-law is one hundred, I know I’m not done accompanying people at the end of life. For other articles about goddess myths, see Nature, Mythology, and Healing: Daphne Meets the Green Man and Listening to the Dark.