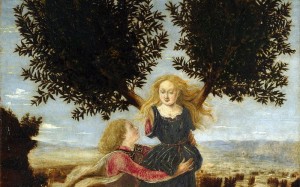 Eight days after my husband’s death, I dreamed of the Green Man, a pre-Christian northern European god of death and rebirth. Consciously, I knew him as a face on a garden gate, but the dream made me feel safe and directed me toward Nature where forest and fields comforted me when grief flooded in. The more I read the mythology of the Green Man, the more I understood the dream as a healing gift. 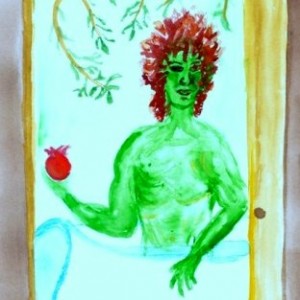 At that time, our mythology class was studying the myth of Orpheus and read one of Rainer Maria Rilke’s Sonnets to Orpheus each time we met. After discussing the poem, we painted or drew an image that grabbed our attention.

About ten weeks after Vic’s death, we read this:

Want the change. Be inspired by the flame
where everything shines as it disappears….

Pour yourself out like a fountain,
flow into the knowledge that what you are seeking
finishes often at the start, and, with ending, begins.

Every happiness is the child of a separation
it did not think it could survive. And Daphne, becoming a laurel,
dares you to become the wind.[i] 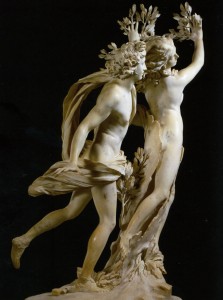 I understood “Want the change.” I wasn’t sure it was possible, but I had no choice. I heard how things shine as they disappear, the way my husband Vic radiated kindness and love in his dying days. I accepted the cycles of beginning and ending and knew about the necessity of a separation I thought I could not survive.

But Daphne? Who was Daphne?

I learned she was a minor Greek goddess or beautiful nature nymph associated with water. Apollo in one of his ignoble adventures chased her with the intent to rape and possess. Daphne prayed to the Earth for safety and was turned into a sacred laurel tree. Her leaves became the crown for winners in the Olympic games. 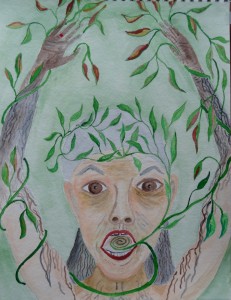 I felt an immediate connection to my Green Man dream and drew myself as Daphne becoming a tree. Thinking symbolically in the language of myth, Grief was my pursuer, abducting me into the dark underworld no matter how much I pleaded for help. So I painted myself as a Green Woman rescued by Nature and growing upward into life and light.

I later learned that Laurel (Daphne is the Greek name) was the plant of prophecy and poetic inspiration at Delphi. Besides garlands for winners, the tree gave us the names “poet laureate” and “baccalaureate.” Daphne is also bay leaf, a plant I use for soup. I had drawn the leaf shape correctly without knowing the connection. 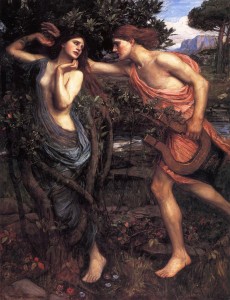 Inspecting my drawing from seven years ago, I see more than I consciously knew at the time. I had connected the Green Man as cycling nature and Daphne as poetic inspiration by painting vines and branches emerging from the feminine spiral on my tongue.

Nature’s healing and the inspiration of Rilke’s poetry joined forces to help me move toward a new life.

[i] Part Two, XII from Sonnets to Orpheus, In Praise of Mortality, translated by Anita Barrows and Joanna Macy 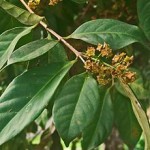 For another piece about the Green Man, see The Green Man’s Guide to Life. I also wrote a post about another goddess called Home with Hestia.

With gratitude to Ellen Schmidt of Writing Room Workshops for her loving support and instruction. Ellen is a writer’s delight whose constructive well-considered feedback helps me see what works and what doesn’t. When I feel a piece has failed, she often points out the places that work. My book Leaning into Love emerged from early drafts written in Ellen’s classes.