The Sacred Water of Life: Prayer Walk for Seneca Lake

Women walkers carried the water vessel in a ritual circumambulation of Seneca Lake to bless the water and create a circle of protection for the lake. 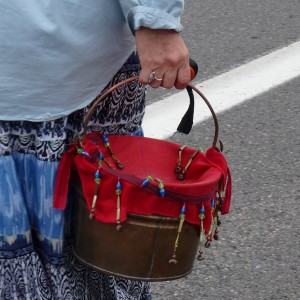 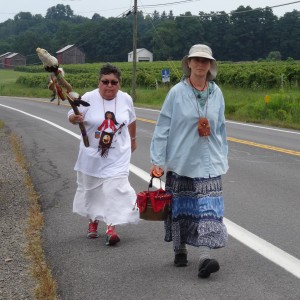 The vessel moved without stopping, handed from one walker to the next from sunrise to sunset for two and a half days. 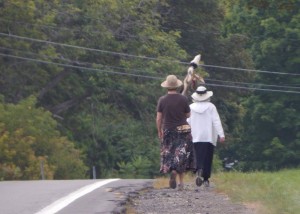 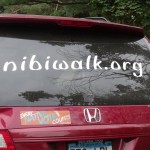 During a morning ritual on Friday, August 28, 2015, water was scooped into a ceremonial copper vessel from the southern tip of Seneca Lake. When I joined the walk on Sunday, the water had moved by relay nearly forty miles to the northern point of the lake and then half-way down the east side.

My friend Peggy and I walked together, just as we had for the first prayer walk two years ago. While I carried the copper vessel, Peggy carried the eagle totem of protection. I prayed for the water in walking meditation before carefully passing the bucket to the woman waiting to receive it. Then my pace slowed while the water moved forward with the next carrier. 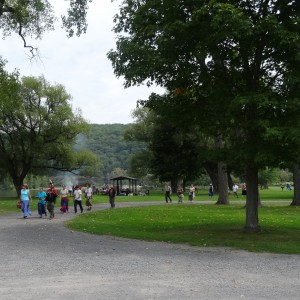 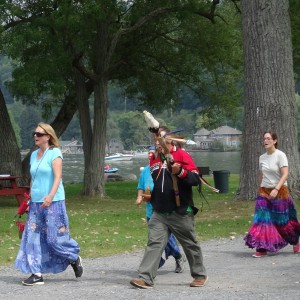 Each relay was about one mile. Following Ojibwe tradition only women carried the water, wearing long skirts out of respect for the earth. 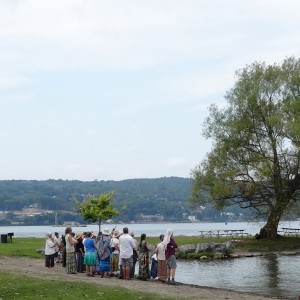 Sharon Day, the Ojibwe River Walker and elder, had come to the Finger Lakes from 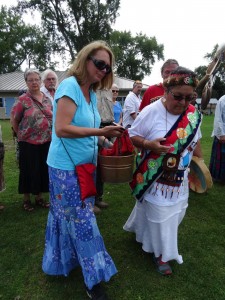 Minnesota to share her tradition for the second time. Sharon leads prayer walks for water throughout the country.

The walkers sang and drummed as they carried the water into the park at the end of the journey. At the spot where the walk began, the water was returned to the lake with blessings and offerings. The ritual quieted my mind and opened my heart. The intention was clear even without understanding the Ojibwe words. 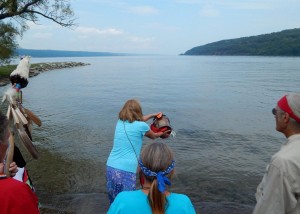 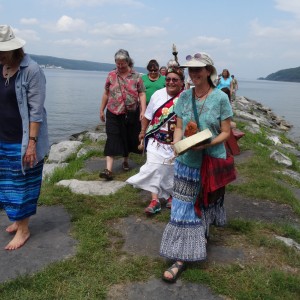 Wearing her ceremonial clothing, Sharon led a sacred closing ritual with drumming and chanted prayers. After an offering was given to Seneca Lake, Sharon invited everyone to take something from the altar. I chose a small tin of herbal smoking mix to give to a friend who loves the lake. 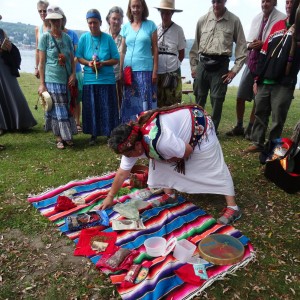 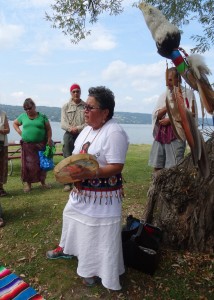 Alongside dedicated nonviolent political activism to protect Seneca Lake from gas industry development, the Prayer Walk adds another spiritual and universal dimension. The ritual deepens my commitment to protect our sacred water and all of life.

I found a wonderful article by a Canadian water walker named Lynne Brown. Sacred Spirit of Water: The Water Walk, 2015 describes the power and meaning of taking part in this ritual. I share a few excerpts.

… In traditional Anishinaabe (Ojibwe) communities, women were given the responsibility of taking care of the water. Water is a medicine that helps to keep us all alive. We all need water to survive. Without water, all of creation could not exist. The Anishinaabe believe that water is the blood of Mother Earth. People depend on water for drinking, for medicines that grow in the water, for travel, and for …the food that we eat. Water is a sacred gift from the Creator. (adapted from Turtle Island Creation story) 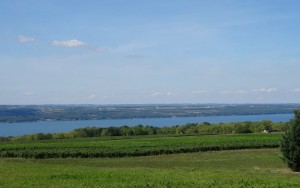 “Once the walk begins, water must keep moving until ‘touchdown’,” Joanne Robertson shared. “Touchdown happens each night. It is wherever the water pail touches the earth. A circle of pebbles marks the spot and symbolizes where the sunrise ceremony will begin as the sacred water walkers greet the early morning to venture out again. Only women carry the water. Eagle Staff Carriers walk behind the water pail …to protect the journey.”

I hope you’ll enjoy The Copper Vessel, an article I wrote about the first Prayer Walk for Seneca Lake and another piece called Angry Faces, Placid Water about political action to stop gas storage under Seneca Lake. Learn more details about the ritual and watch a moving documentary about the walk made by  Tony Ingraham of A Walk in the Park. I’m grateful to the hard working organizers and many participants. Thanks also to Gas Free Seneca and We Are Seneca Lake for their vigilant protection of Seneca Lake.