In the Company of Friends 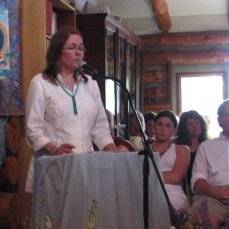 “Are you OK?” Lauren asked when she called the morning after Vic died. Lauren Cottrell Banner is one of a few friends who attended Vic’s death. She helped me swab his mouth, chant prayers, and read passages from The Tibetan Book of Living and Dying.

“I’ll be there in a few minues,” Lauren said. “I’ll sit quietly or help however I can.”

I was lost, but my friend was on the way. 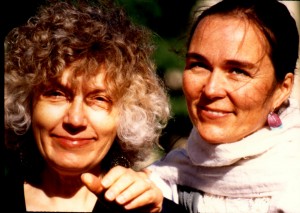 Elaine & Lauren with the Dalai Lama

At midnight, only ten hours before, I sat on the threshold of death, stunned by the stillness of goodbye. Death smelled sweet on Vic’s body. It was salty on his skin and harsh in his gasping breath. Death hovered in the long silences after each exhalation, but it was the only way out of suffering. We had read poems and prayers for days. We had rubbed his feet with oil and put flowers over his heart. Now we waited, exhausted.

I couldn’t go with Vic and he couldn’t stay. But where was I?  Lost on that mysterious threshold between my old life and a new one. I didn’t have to tell Lauren. She knew. 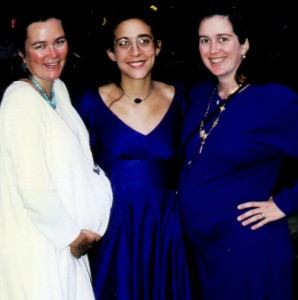 At Eve’s wedding, Lauren on the left

I first met her in a philosophy class around 1980. She wore a hip California headband and radiant open smile. She was younger than the others seated around the table and ten years felt like a lot then. I was an older woman in my early thirties with young children.

Lauren began showing up in our family photo album around 1990.  Vic and I sat with her and her husband in their hot tub, talking philosophy and psychology under the stars. We saw the Dalai Lama together many times. I danced at her wedding and showed up to help after the birth of her first child. She helped me create a ritual when my youngest son left home. I was there during the birth of her second child, holding her trembling thighs, loving her through each harsh contraction. 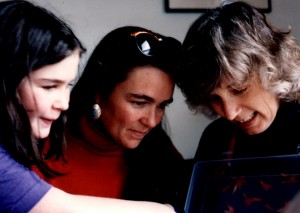 Her marriage didn’t last, but our love did.

In 2007, she and a circle of friends stayed with me in the hospital the night Vic had twelve cardiac arrests. After the crisis calmed and others had left, Lauren stayed next to my side, awake, watching over him so I could sleep a few hours. Then she went to see the Dalai Lama who was in town and let him know what was happening to Vic. 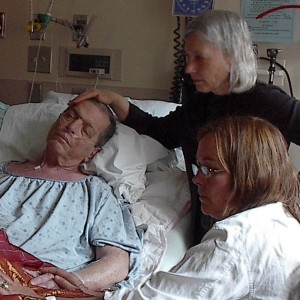 With Vic in the hospital the day before his death

After Vic’s death almost a year later, she and I rolled his hospital bed flat, smoothed the blankets, and kept watch through the night. Two hours later she reached for my hand and placed it over Vic’s heart.

“Feel this,” she whispered. His chest was warm, hours after his last breath.

She was with my son and me when we decorated Vic’s cremation box. As the summer turned to autumn, she walked my trails with me and my dog Daisy. She didn’t suggest I stop crying or get it together. 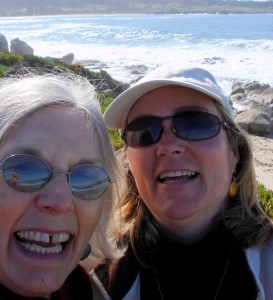 Lauren moved to California a year after Vic died. I visited her at her mom’s home in Carmel where we saw wild tides strip away the sand to reveal bare black stone. I visited her in Santa Monica where she lived with the man she loved and would marry. She came east a few times, once with her new husband. 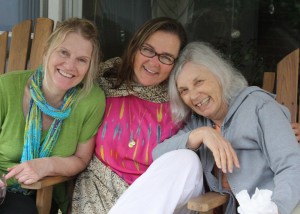 With Pat and Lauren in North Carolina

In 2013, she flew to my home in the Finger Lakes and drove me to my son’s wedding in North Carolina. I was a wreck with Meniere’s Disease dizziness, and she didn’t want me to travel alone. We harvested and chopped vegetables for the wedding banquet and laughed with other friends who came to help. We created a five-year-anniversary ritual of remembrance for Vic, bringing in grief consciously so it wouldn’t surprise us at the wedding. I managed dizziness with Valium and love. After the dancing, after a day of cleaning up, Lauren drove me home—thirteen hours north.

I’m in California now, visiting Lauren in Santa Monica. She’s recovering from a broken foot, so instead of walking the beach, we’re spending time in her garden. The day after I arrived, it rained all afternoon, a blessing on the drought-parched earth. 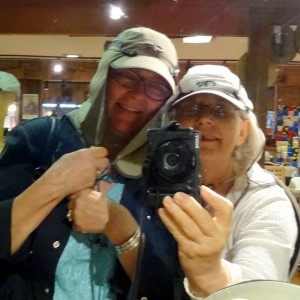 Trying on hats in the Santa Monica rain

We plan a road trip up the coast. We’ll lament over the drought, visit people we love, and rejoice over the goodness of life. We’ll talk about the past and share dreams for the future. We’ll weep for those we miss and celebrate where we are.

With Lauren next to me, I won’t get lost.

Do you nourish old friendships by planning time together? Have you ever written an ode to a friend? “It’s like something you’d write for my memorial service,” Lauren said as she wept while reading this piece. “I’m so glad to read it while I’m alive.”