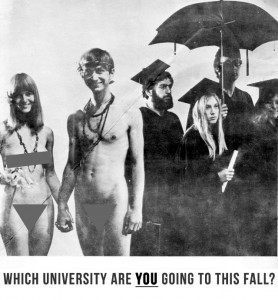 Vic and I were in Palo Alto at the Free University Psychodrama Commune where residents were free to express every feeling and do what they wanted as long as they told the truth about it. Robb Crist swept into the living room while Vic and I shared a welcome-to-California smoke. Robb was surprisingly pleased to see us and asked if we could spare an hour to help him out. Vic and I were in California for adventure, so why not?

Robb was a wild man, but you’d never know at first glance. He looked as straight and sober as a banker, although he was willing to join any revolution, ingest any pill, or try any experiment. He was also the disciplined driving force behind the 1000+ member Midpeninsula Free University.

We drove into the foothills to a small cottage at the end of a verdant driveway. The cottage yard was a jungle of overgrown vegetation hanging with jingling wind chimes and floating prayer flags. Without knocking, Robb opened the door on a single large room with shabby furniture pressed against one wall and a white sheet hanging on another. A cloud of floral incense overpowered the pungent smell of eucalyptus trees. A photographer stood in front of the white sheet, messing with a professional camera and two floodlights. I followed Robb inside, clinging to Vic’s hand. 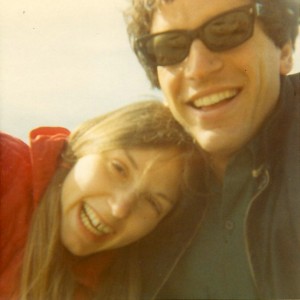 “Poke around and find something that fits,” Robb directed, pointing to a cardboard box of black graduation caps and gowns. Vic and I put the gowns on over our clothes, giggling over the combination of his bushy beard and graduation cap. “Perfect. You are the Berkeley couple,” Robb said.

“Find one that fits you,” Robb told his woman friend. He rummaged around in the box, put on a black gown, and looked in a mirror. “Great!” he said, “We are the Stanford couple.”

“Hey, Heather! Michael! Are you ready?” Robb shouted up the ladder to the loft.

A young guy descended the ladder, grinning and slightly bashful. His girlfriend came after him. They wore only beads, flowers, and wide grins. “This,” Robb said with a flourish of his hand, “is the Free University couple.” No matter how this turned out, it was already worth the cost of our plane tickets.

When the photographer was satisfied with the geometry, he coached, “You from Berkeley and Stanford, look unhappy and gaze away from the camera. You are bummed out and bored.” He handed Robb, the “Stanford” guy, an umbrella and me, the “Berkeley” chick, a rolled up sheet of paper—my diploma. I struggled to keep a straight face. “You Free University folks, look directly at the camera and groove. Be cool. You are having a fantastic time breaking the rules.” Yes, they were. We all were. He took a series of photographs and sent us on our way.

A few weeks later, the Midpeninsula Free University catalog arrived offering exciting courses on yoga, auto mechanics, sexual healing, weaving, women’s liberation, meditation, and the Tarot. The photo taken the day we arrived was on the inside of the front cover (censored here to protect the naked).

I was sorry that Robb didn’t choose Vic and me to be the Free University couple, but Robb knew better. We were sightseers, window-shopping in this world. We were not gypsy-wild, stoned-out hippies crashing in the Haight. Underneath the beard and bells, we knew where we would sleep that night and that we would sleep only with each other. We had money to buy groceries at the food co-op, had been to the nude beach just once, and had plane tickets back home to Ithaca. Besides, Vic refused to wear flowers in his hair.

I’d love to hear about your early adventures. For more stories about my early relationship, see My Hippie Wedding or The Art of Argument: Essential Marriage Skills 101.