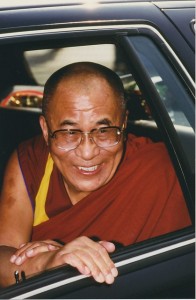 In March 2012, a friend sent a link to a Huffington Post article: Dalai Lama Wins Templeton Prize For Work On Science, Religion. I flashed back to forgotten details of the weeks around my husband Vic’s death in June 2008.

Templeton Press published Vic’s last book Tibetan Buddhism and Modern Physics: Toward a Union of Love and Knowledge in March 2008, just three months before Vic’s death. The book focused on the deep connections between Buddhism and physics. Chinese education taught Tibetan students that they could not be both scientists if they held religious beliefs, so the Dalai Lama hoped Vic’s book would give these students a different perspective. 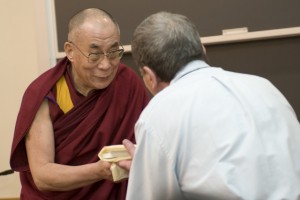 While Vic went through cancer treatment, the Dalai Lama wrote a generous forward to the book. Six weeks before Vic’s death, the Dalai Lama spent two days at Colgate University where Vic taught physics and a course on Tibet.

Vic presented the silk-wrapped book to His Holiness at a science and Buddhism colloquium, weeping as he thanked the Dalai Lama for his inspiration and love. Stepping down from his raised chair, the Dalai Lama opened his arms to my dying husband and held him like a mother. I wrote about it in an article called The Last Embrace: The Dalai Lama Blesses a Dying Man published in Lion’s Roar Magazine.

After that embrace, Vic no longer feared his coming death. 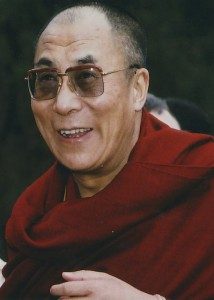 A few weeks after the Dalai Lama’s visit and a month before Vic’s death, the Templeton Foundation asked Vic to write a recommendation for the Templeton Prize, an annual award granted to a living person who …”has made an exceptional contribution to affirming life’s spiritual dimension, whether through insight, discovery, or practical works.” Despite Vic’s illness and many health crisis interruptions, he wrote a two page letter nominating the Dalai Lama. He asked me to read it for editing corrections or anything he might have left out. He planned to polish the formatting and send it the next day.

Instead, Vic’s health worsened in the night and he could no longer breath. I forgot about the nomination in those other worldly days as I walked with Vic to the threshold of death, but about a week after Vic died, Paul Mullin at Templeton Foundation sent an email asking if Vic had written the promised recommendation. I found the nomination on Vic’s computer desktop and forwarded it as Mr. Mullin requested.

I imagine there were others, perhaps many others, who nominated the Dalai Lama for this prestigious prize, but Vic’s convincing argument for why a spiritual and political leader should receive the reward was part of the whole. How happy Vic would have been about the outcome of his last act.

This short and inspiring video of the Dalai Lama accepting the Templeton Prize gives a glimpse into the way the Dalai Lama views his contribution to humanity.

You can see Vic and the Dalai Lama teaching at Colgate on this page of Vic’s website. See Vic Mansfield’s website for excerpts from his last book and other articles about science and religion.