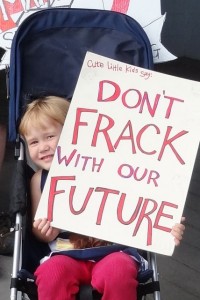 On August 27, 2012, people from all over New York State marched to the capital building in Albany and delivered 3,200 pledges to resist fracking to Governor Andrew Cuomo. Hundreds of small environmental organizations joined under the umbrella of Don’t Frack New York, including the local organizations I know best: Gas Free Seneca, Hector Clean Water, and Shaleshock.

That morning, Bill McKibben, the founder of 350.org, opened our hearts by naming the largest bodies of water in New York State from the Susquehanna River to the Mohawk, from Lake Chautauqua to the Long Island Sound. Many of the names were Indian, including Seneca and Cayuga Lakes, the Finger Lakes that lie west and east of my home. Al Appleton, former NYC Commissioner of Environmental Protection and international consultant on sustainability, water, and infrastructure reminded us that anything gas can do for the economy of New York State can be done better by investing in the renewable sustainable energies of solar, water, and wind. Street theater, creative signs, helpful police, and enthusiastic chanting accompanied us as we walked through the streets. In the park behind the capital, Sandra Steingraber led us in a pledge to resist fracking: “If Governor Cuomo permits high-volume, horizontal hydraulic fracking in any part of New York State, I pledge to join with others to engage in non-violent acts of protest, including demonstrations and other non-violent actions, as my conscience leads me.”. 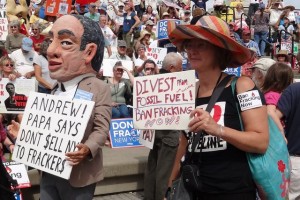 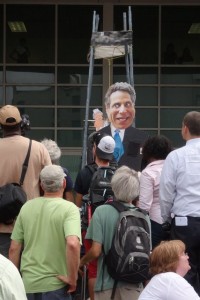 Street Theater in front of Dept. of Environmental Conservation

During my husband Vic’s illness and after his death, I found comfort in nature. I gathered courage as I watched oak buds swell, leaves unfurl, and ripe acorns fall to the earth. In the spring, my shale-lined streams overflowed with snow melt and hurried toward Hector Falls and Seneca Lake. I visited Seneca Lake in the evening to watch the sunset and soak my grieving heart in peace. Morning or evening, on the longest or shortest days of the year, in sandals or snow pants, Nature took care of me. Returning her favor, I made the pledge to resist fracking and the fracking infrastructure that threatens the water, peace, and beauty where I live. 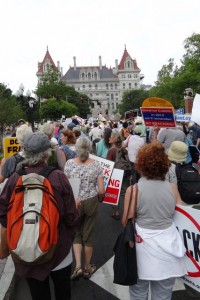 Will Andrew Cuomo try to sell the clean water and beautiful landscapes of NY State to the highest bidder? The gas industry plans to take what it wants, pass around fat tips for a few, and leave the rest of us with a decimated and devitalized state as they’ve already done in Pennsylvania. Activists are committing for the long haul. We’re learning how to organize and flex our muscles. Come join us and help us support the clean water and beauty of New York State.

Is fracking a threat in your neighborhood? How do you feel about this? You might be interested in my other posts about fracking and gas storage: “Angry Faces, Churning Water” and “Angry Faces, Placid Water.” Learn more about this issue at Don’t Frack New York and see a great video of the march at A Walk in the Park.