In July 2012, Tony Ingraham of Walk in the Park made my blog “Angry Faces, Placid Water: Fracking, LPG Gas Storage and Seneca Lake” into this video. Inergy, a Kansas City based company, was working on their facility on the shores of Seneca Lake, even though their permit had not been approved by the New York State Department of Environmental Conservation. Along with others, I grieved for the lake and the land.

Concerned residents and businesses founded an organization called Gas Free Seneca to stop this facility. We agonized over water pollution, potential accidents, and trains loaded with gas traversing Watkins Glen State Park gorge trails. In recent years, the wine industry and tourism brought economic vitality to our region, but now we face a voracious industry that swoops in, takes the resources, pays off a few, and leaves a mess for the rest. 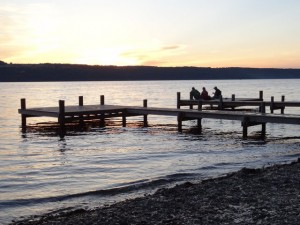 On August 7, people gathered at the Glen Theater in Watkins Glen for an inspiring movie called “My Name is Allegany County” about Allegany’s successful civil disobedience efforts against a proposed nuclear waste dump. In Allegany County, the state government planned to take over private property, whereas we have a wealthy unregulated industry building a facility on property they quietly bought from a salt plant before local residents knew what hit them. Allegany also had those scary, but motivating words “nuclear waste dump” whereas we have liquid petrolem gas (LPG) and natural gas. I burn LPG gas in my kitchen stove, you might say as I do. How dangerous can it be?

Yes, but do you want LPG and natural gas in your drinking water? What about air-polluting gas flares and a massive increase in truck and train traffic? What about lake, ground, and well water pollution from leaks from the unlined mines and spills from brine ponds that are already happening at the Seneca Lake site? What about explosions and accidents that our local fire departments are ill-equipped to handle? What about the alarming ugliness Inergy is creating on the shores of our beautiful lake?

After the film, we discussed our next action, a march through Watkins Glen on Friday, August 17. We also considered future peaceful civil disobedience that could involve arrest, fines, or jail.

“It would be easy to block the road into the Inergy site,” one man suggested. Across the theater, a sullen man who works for Inergy took notes, not even bothering to be sneaky about it. I recognized him because he attends town and county meetings to speak in favor of the facility. It’s his job.

“Don’t worry if the industry knows what you’re doing,” Spike Jones advised. Spike is a retired military officer who was a leader in Allegany County and now travels around the state to help people plan effective actions against fracking. “The Inergy employee here is doing what he does for a living,” Spike said, “and you shouldn’t expect otherwise.”

The threat from Inergy and the fracking industry fills me with anticipatory grief, much as my husband’s aggressive cancer did, but Inergy doesn’t affect just one life or one family. It endangers us all.  It’s hard for people to keep their mind on gas industry risks when they have mortgages to pay and kids to raise, but this is our precious water and lake. If we allow it to be polluted by the fracking industry, what then?

I stay calm and gather resolve by repeating the sacred Indian name of Seneca Lake. As you’ll hear in the video, a Seneca Indian clan mother told her grandson that the lake loves to hear her true name. I love saying it to her.

Are you concerned about fracking or global warming? Can you help us protect Seneca Lake? For more information, go to Shaleshock or Hector Clean Water. For more about the threat to Seneca Lake, follow this link.