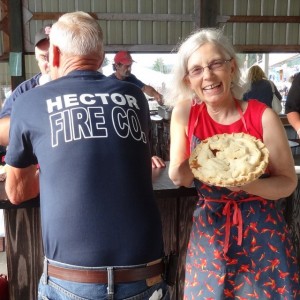 Pie is community glue, its very own language of love.

“That blueberry looks just like the pie my grandma baked,” one grizzly old guy tells me at the Hector Fireman’s Fair. I grin and laugh and ask my friend to cut this old timer an extra-large slice.

Beth Howard loves pie. I finished reading her book Making Piece: A memoir of love, loss, and pie on the day I was baking for the fair. Love, loss…and pie?

Howard had a passionate and rocky nine year marriage to Marcus. She followed him and his business responsibilities around the world, but eventually decided that even if she loved him, she needed a different life. A few hours before he was to sign the divorce papers, she got a phone call saying Marcus had collapsed and died. So begins Howard’s saga of grieving, guilt, and recovery. She was already a journalist as well as a professional pie baker, so she packed Marcus’s RV, hit the road with a film-maker friend, and created a reality series about pie. Her whimsical journey ended when she rented the American Gothic House, the cottage in Grand Wood’s famous painting, near her Iowa birthplace and set up the Pitchfork Pie Stand for tourists.

I loved Howard’s ability to turn a grief memoir into an adventure. Her well-written stories of life, friendship, and grief make the rest of us feel we can find our way through the hard times. Her book ends with the words: “I love pie.” 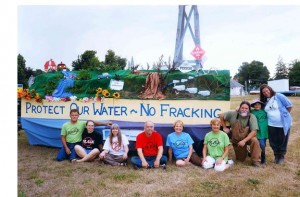 While enjoying the last pages of Howard’s book, my three apple pies browned and bubbled in the oven. Vic and I first took our kids to the Hector Fair in the 1970s. Little has changed at the fairground since then, although along with kid’s rides, games, and food booths, this year’s parade included an anti-fracking float from Hector Clean Waters and a vintage truck carrying Nate Shinagawa, our Democratic and environmentally friendly candidate for US Congress. 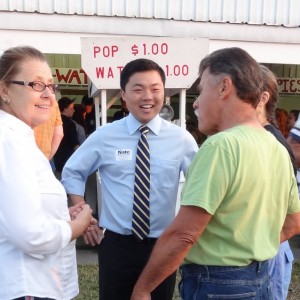 Nate Shinagawa at the Hector Fair

My sons David and Anthony dissolved into peals of laughter on the merry-go-round when they were toddlers, thrilled at the small Ferris wheel when they were six, and took in games of chance and skill when they were teenagers. They met up with friends at their base camp, the Fries, Pies, and Corn Booth and probably found their way to the beer tent.  Vic and I spent one or two evenings each year manning the concession with other amateur bakers, ticket-takers, and cooks from Wisdom’s Goldenrod, the meditation center across the road from the fire station. Unlike most booths, we gave and still give 100% of our profits to the Hector Fire Department, our way of thanking our decidedly conservative community for tolerating our unusual pursuits of philosophy and meditation. In exchange, the fire department lets us use their folding chairs for big gatherings and their parking lot when the Dalai Lama came to visit.

This year as always, the air was heavy with hamburgers, hotdogs, and fried onions and peppers. Our booth held up the vegetarian end of the food chain, serving greasy fries and buttery corn on the cob, plus pies. Lots of pies. Since the pies are made by a wide variety of cooks, we respond to any complaint by offering a new piece of any homemade pie the hungry person chooses. All pie guaranteed. I love apple pie. What’s your favorite?

You might enjoy my wide variety of healthy vegetarian recipes.