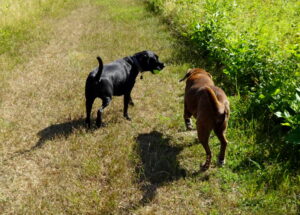 Orange fritillary butterflies flutter beside the trail, dining on coneflower nectar and dew. The dogs run in front of me. Old Willow leads in a burst of energy, but her speed doesn’t last. Disco comes behind, bouncing up and down until I throw a yellow squeaky ball. We walk together in morning peace punctuated by the warning calls of a Red-winged Blackbird and Disco’s squeak, squeak, squeak.

Willow needs to be inside before the sun comes over the eastern hill and overheats her chocolate brown body. Her labored panting breaks my heart. She’s 13 and her weak back leg collapses sometimes. She recovers her gait and keeps going, a good lesson for me with imbalance from Meniere’s Disease. Heat and turbulent weather are hard on us. 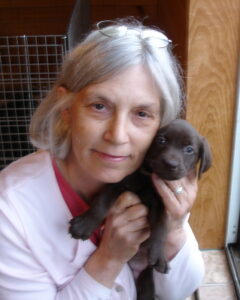 Willow saved me after my husband Vic died. When I brought her home in 2009, her puppy sweetness brought joy after years of grief, but before she was six months old, she needed surgery on her left knee. A dog with torn knee ligaments? It felt unfair, but helping her heal healed me.

Now her age takes a toll and this time she won’t recover. 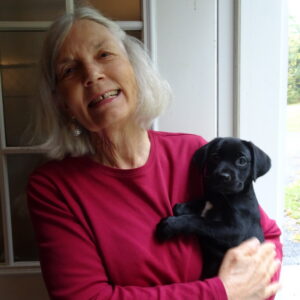 Three year-old Disco loves Willow the way a baby loves her Mama. She watches Willow for silent assurance that a new place or person is safe. If Willow moves toward the unfamiliar, Disco follows. My black rescue mutt is a sweet high strung girl who hardly knew her biological mother, so Willow inherited that role. As they walk down the trail side by side, I remember Marion Woodman calling her beloved dog her Soul Animal—an intimate friend closer and more comforting than most humans. 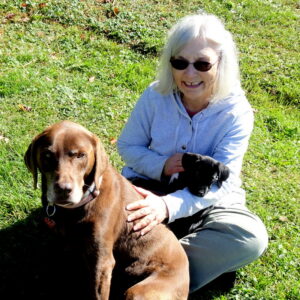 Willow and Disco meet for the first time in 2019

How will Disco cope when Willow dies? How will I? The three of us have been constant companions since the pandemic arrived not long after I adopted Disco. With my help, Disco will manage, the way I managed when my love Vic died. Disco and I will grieve together. More hugs, more treats, more hikes, more visits with friend’s dogs, and more snuggles by the wood stove on cold winter nights.

For now, every night, Willow makes it up the stairs, slowly and carefully, to sleep with her pack. Every morning, I wake up with vertigo and silence before my hearing aid and cochlear implant are in place. I scan my body and groan. “I don’t want to feel like this. This is too hard.” Then I open my eyes and see two pairs of brown eyes watching over me, waiting for me to wake up. 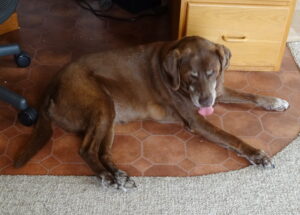 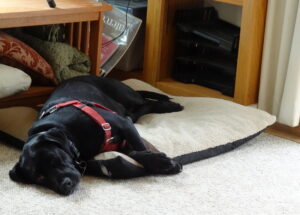 Willow struggles to her feet like an arthritic grandma, but she loves our morning walk. After breakfast, she lies in my breezy office near my feet and Disco lies a few feet away by an open screen door. They aren’t worried about the future. Being together this morning is enough.

I’ve had dogs since I was a child and some felt like “soul animals,” but these two are special companions even though neither has been easy. Do you have pets who feel especially close and supportive?

Marion Woodman speaks of her analyst Dr. E.A. Bennett who called her dog her “soul animal” in a heart-opening 16 minute video called Marion Woodman and the Conscious Feminine Project. If you’re only interested in her discussion of a soul animal, that begins about 4 minutes into the video, but I recommend the whole video. For other posts about my connection with Marion, see Falling in Love with Marion Woodman. If you’re a dog lover, see Black Dog Winter: A Gift of Synchronicity.