Out of Control: Pilgrimage to India 1 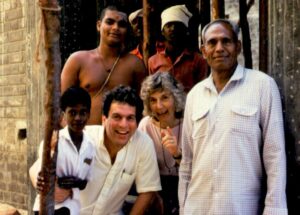 I stacked energy bars and Imodium on the dining room table a month before we left. Then there were vaccinations and clothes for winter in New York and summer in South India. Toilet paper, malaria pills, water purification tablets, hiking boots, dried fruit, and sandals. Check each off the list.

Since I’m an anxious traveler, we were well-equipped pilgrims. We might die and never return to our children or who knows? Lofty Indian philosophy we’d studied for decades didn’t match stories about cow urine, poverty, and clamoring blessing seekers told by friends who had visited the Sankara Mutt in South India. The sage Sankara, head of South Indian Hinduism, was 96 years old, so if we wanted his blessing, we couldn’t delay. 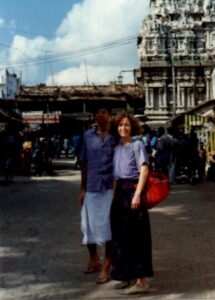 I’d felt a similar fear when visiting other spiritual teachers like the Dalai Lama who might initiate ego-threatening experiences. But isn’t that what I wanted? Theoretically, but I packed to save us from illness or inconvenience. We planned to travel with close friends Michael and Harriet who, along with Vic, had a sense of humor about chaos.

On a foggy night in March 1990, we boarded a commuter plane in Ithaca heading for New York.  The plane landed in Binghamton, sixty miles from home. JFK was fogged in. No planes in or out. Our luggage disappeared into GUASD (the Great United Airlines Suitcase Devourer), but we had toothbrushes in carry-ons and money. We sat on hard plastic seats in the Binghamton airport after they deboarded the plane. Now what? I just knew we’d miss our connection to London and then Madras.

Vic was calm at first and then frustrated by my continuing anxiety as he offered platitudes like, “There is nothing we can do, so why worry?” He refused to share my agitation. I refused to let it go. Michael and Harriet explored the food machines, smiling at our situation. Vic spread his coat on the dirty carpet, removed his boots, rolled his fleece into a pillow, and opened a book. He crossed one leg over the other as he turned the pages. His cool made me hotter. 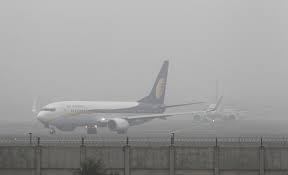 “We’ll miss our flight,” I said with a bitter edge.

“Read or do something, E. You only make things worse,” he batted back.

I was embarrassed by my anxiety and wanted to hide it, but couldn’t fool anyone. Vic read. Michael grinned. Harriet laughed at the irony after all our preparation. I couldn’t find humor or detachment. 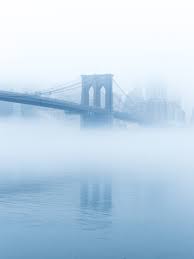 Close to midnight, Vic or Michael had a bright idea. “Let’s take a cab to JFK. Maybe we can still catch our plane.”

They scrambled to find a cabbie willing to drive to New York City in the fog. We needed to leave immediately. I prayed for the plane to London to be delayed, as though my prayers had power. The cab fare was outrageous. We gratefully paid. I dozed fitfully as we drove through the hazy dawn.

This is the first in a series about trips to India to experience the peace and blessings of the Hindu sage Sri Sankaracharya. Do you have a trip that began like the trip from hell but ended up being heavenly? Tell me a little about it since I’m still a nervous traveler.

For other stories about returning to my small local airport in fog and snow, this time by myself, see I Thought I Could.   For another kind of travel, including hiking at the Continental Divide when I was 6 months pregnant, see Captured by the Mother Archetype.