In the Crypt of St. Francis 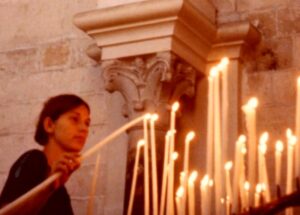 Italian sun glowed through stained glass windows in the upper Basilica of St. Francis of Assisi, but we headed for the crypt beneath the cathedral. The Poverty and Simplicity of Saint Francis had been covered by grandeur and gold within a few years of his death nearly a thousand years ago, but I hoped for a whiff of the saint’s holiness.

Francis taught a gentle loving side of spirituality. He focused on compassion for the suffering, care for the sick and downtrodden, and reverence for women. He expressed love for all beings, especially the wild ones like wolves and birds. For a short time, many Italian Catholics followed him and took vows of poverty, but within two years of his death, the Order of St. Francis opted for power based on gold, not simplicity and piety. 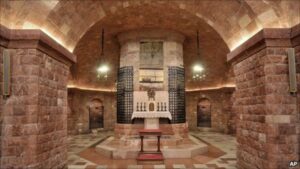 In 1973, my husband Vic and I traveled to Assisi with our 2 ½ year old son. We walked to the lower basilica and descended worn stone steps into the crypt, the basement holding the tombs of the Franciscan saints. The stone walls felt cool and rough under my fingers, and the dimly lit crypt was a respite from fierce sun. Vic babysat while I wandered, searching for the tombs of St. Francis and his companion Brother Leo. My heart ached as though Saint Francis had died recently instead of in 1226. 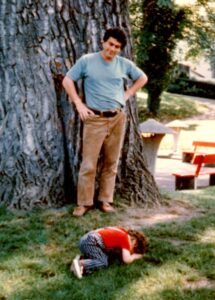 I sat on a stone step near the tombs and meditated while Vic tended David. Quiet tears flowing down my cheeks turned into sobs. Loud and insistent.

“Is she all right?” an Italian man asked Vic in accented English. I took in the man’s concern, but his question felt far away. I was somewhere else, lost in mystical grief. 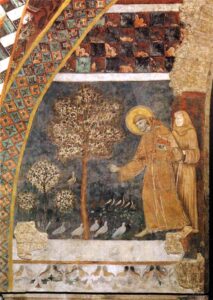 Francis Preaching to the Birds by Giotto

This crypt held the quiet of a thousand years of reverence for this monk and his compassionate teachings. My grief felt raw and fresh as though I were learning for the first time that the Saint had died. Grief infused these underground stones as devotees descended the stairs to pray and honor the Saint. Sunlight, tourists, and the clamor of shops selling votive candles, postcards, and crucifixes filled the main cathedral above the tombs.

“I’ll be back soon,” Vic whispered when he took our restless child outside. My tears had stopped by then. Mystery surrounded and held me in the Sacred Presence of St. Francis. 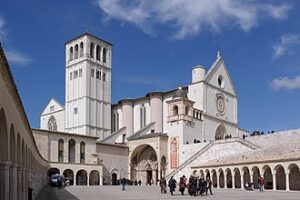 I sat another hour in the deep silence of the Underworld, this womb and tomb of the Holy. When I left the dark interior space and walked into piercing sunlight, I heard my child shriek with delight as he chased pigeons across the courtyard.

As I watched our curly-haired boy run across the courtyard with unrestrained joy, my heart expanded to hold both wild love and quiet grief.

“Lord, make me an instrument of your peace.”

I expected to be moved in Assisi after reading stories about St. Francis’s life and his love for animals, but the depth of mystical feeling was overwhelming. I wasn’t brought up Roman Catholic and only loosely Protestant. I read about St. Francis in the 1960s, drawn to the St. Francis prayer which was written 700 years after his death. Was the St. Francis Prayer important in your life?

For other posts about spiritual seeking, see When the Dalai Lama Blessed the Children. After visiting Assisi, we went to Switzerland to meet Paul Brunton. Paul Brunton helped me understand the importance of nature in my spiritual practice. I wrote about this in Gardening Is a Spiritual Practice.