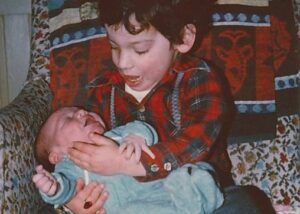 Little David pulled open the door and held up his arms for a hug. Snot dripped from his nose onto his red plaid shirt. He wasn’t sick when I’d left two days ago to give birth in the local hospital that supported natural childbirth and had 8 beds in the maternity ward, but he had been worried.

“Protect the baby,” Vic’s mom said. She was at our house cooking pasta and tending David.

Vic and I disagreed with her. If the baby got a cold in his first week of life, so be it. David needed to hold his new brother and, sooner or later, the baby would get a cold. We didn’t have to worry about covid-19 then. 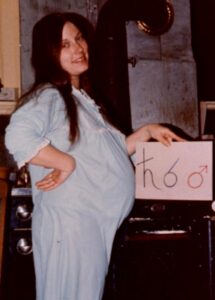 That winter, over 45 years ago, three-year-old David fretted as my belly grew. “It’s big, Mommy,” David said as he patted my belly. “How will it get out? Will you break?” We tried to explain, but I sometimes wondered myself. David was glad to see me in one piece.

“I love you, David,” I said as I rocked him in my arms. David glanced behind me at the front door. “Want to meet your brother?” David’s wide eyes said, “Yes, yes, yes.” I settled him in a large cushioned chair and motioned through the window for Vic to come in. 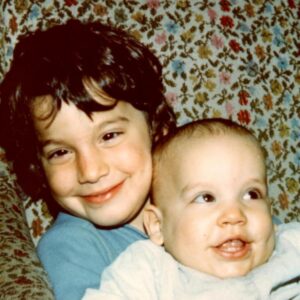 Vic opened the door carrying a bundle swaddled in February layers. He placed the bundle on David’s lap and opened the blankets to reveal a baby in a blue onesie. David’s right arm supported his brother’s back while his left hand cupped his brother’s cheek, pulling the little face closer, holding his brother all by himself. David’s eyes focused on Anthony’s face, his mouth wide with wonder. Snot dripped. Love dripped. Tears dripped from my eyes and Vic’s.

In two days, Anthony dripped with mucus while he nursed. Vic and I were relieved when the disapproving grandma left for Connecticut. Our dog Annie grabbed a quick lick of the baby’s snotty, milky face. 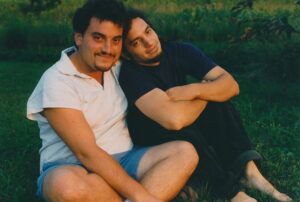 Looking back, I remembered a photo Vic took about six months later in the same chair with Anthony sitting on David’s lap. Could David’s eyes have held more love than that?  And another photo of them sitting on the ground in their twenties with David’s arm wrapped around his brother’s shoulder.

There were tense teenage years and distant years on opposite coasts, but on a recent visit, the first time we’d all been together for 10 months, I watched my two bearded sons lean into each other. I watched them share private jokes and work together. 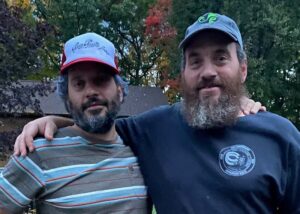 When they posed for a photo at our friend Steve’s house, small smiles played on their lips. They each wore a cap that said something about what they’d lost since March. Green Gorilla Lounge for Anthony the dj whose music world slowed to a dribble during pandemic and an RR hat for Runaway Rocks, David’s disc golf course which sees less action  during covid times.

Both had been wounded by life and the loss of their beloved dad. Both had to give up dreams and plans this past year, but they still had their arms around each other, leaning with trust that the other would hold them strong. 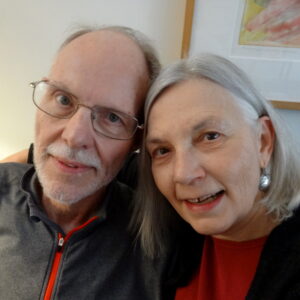 I pray we remember as a nation and a world that we’re all brothers and sisters and need to take care of each other with compassion and heart.

Are you or were you close to your siblings? It can be a tricky relationship. My brother and I were friendly, but saw each other infrequently until my husband got cancer in 2006. Jim helped us find the best doctors, and after Vic died, he called every week and held my grief with patient kindness. When Jim got cancer, I was grateful I could support him and wrote about that time in Coming to Carry Him Home. I’m posting this blog on what would have been his 79th birthday. For a post about what my sons and I did in the days after their dad died, see Planting Joy in a Season of Sorrow.