Sorrow in the Dark Season 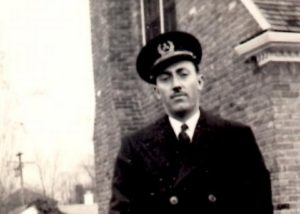 On mid November days, loneliness and hopelessness descend like evening fog. Is it the darkness, the limited light and long nights? Maybe, but my inner gloom lifts in December.

When I first explored these feelings in my thirties, I understood. My dad had died in November. Tears and comforting talk weren’t allowed in my stoic family. Grief went underground.

I remembered standing on the cement steps of my friend’s house after hearing a knock at the door. My brother and mother had come to get me after spending the day at the hospital. Every day that week, I’d gone to my friend’s house after school and waited for their knock. Outside with no coat, I shivered in foggy winter twilight. 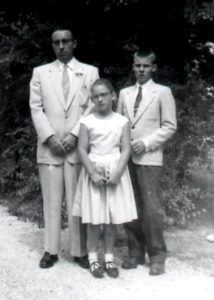 With Dad and my brother at my grandfather’s funeral, 1955

Until a few days before, I hadn’t understood death was near. Secrecy and hiding hardship from children was the way of the times. No one admitted Dad was dying, at least not to me. Yes, he was sick. Yes, he’d been hospitalized the year before and the year before that. Yes, he’d been sick much of the time since I was a baby. Before dialysis or kidney transplants, he suffered with kidney failure that began as an untreated strep infection when he was in the Merchant Marines.

But die? That’s not the same as sick. Not when you’re fourteen. I believed in life and miracles. My heroic dad would make it. He always did. Again and again and again.

“I love you, Lanie,” he said the last time I saw him. It was just after Veteran’s Day, just before he lost consciousness, a few days before his death. 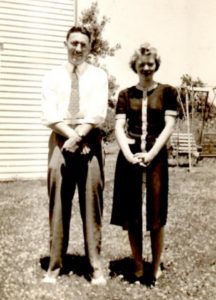 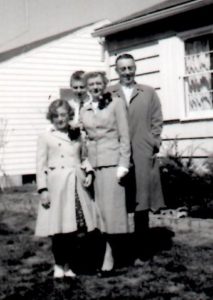 Like many World War II soldiers, Dad didn’t say much about his military experience. “I enlisted in the Merchant Marines, because I wanted to help with the war but didn’t want to shoot anyone,” he said.

“My ship took supplies across the Atlantic and returned to New York with prisoners of war,” he told me another time. “Those kids were teenagers and broken. I felt sorry for them and gave them cigarettes, the only thing I had to give.” I remember the heartbreak in his voice. He shook his head from side to side as though he couldn’t understand.

On dark November days, as my feelings sink, I remember him. His death day was Nov. 17, 1959. Six days before on Veterans Day we remember soldiers’ sacrifices. Although it took twelve years for him to die, Dad gave his life in that war. 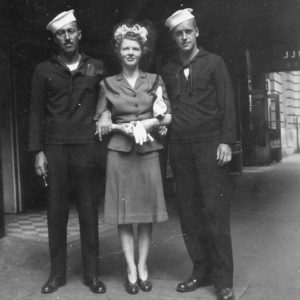 On his death day, I’ll light a candle and spend time with old photos. I’ll remember how much he loved me and how safe it felt to be Daddy’s girl. I’ll remember the never-ending horrors and sacrifices of war.

A few cousins remember my dad from childhood, but since my brother’s death, I’m the last living soul to remember the dates of Dad’s birth and death. I feel stronger and kinder when I remember him and feel how he still lives in me.

Until this year, I had one  photo of Dad and me. In a new box of photos discovered by relatives of my mom’s second husband, I found more photos of us. I’m glad to share some here. For a related article, see When Dad’s Die Young. 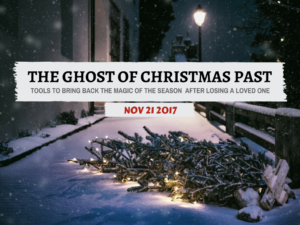 The Ghost of Christmas Past

Do you feel a sinking sadness a certain time of year? Does it help to pinpoint the source? How do you support yourself at those times?

If you’re grieving this year or know someone who is, I recommend a new free video called “The Ghost of Christmas Past: Tools to bring the magic of the season back after losing a loved one.” You’ll find a sign-up at this link for the video which will be available on and after Nov. 21. I was interviewed by Justina Gioia about including rituals to honor loss as part of the celebration. Remembering those we miss deepens our ties with the living.