A Word that Changes Everything 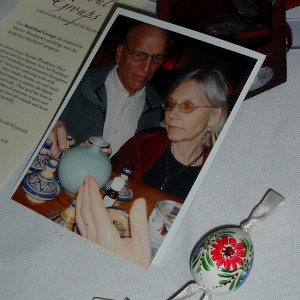 “I’m sure it’s cancer,” the oncologist said in an I’m-telling-it-straight voice in 2006. He forced himself to look into Vic’s eyes and then mine. “We don’t know what kind, so we can’t treat you until we figure it out.”

Vic looked down. Then he looked at me with mournful eyes. He swallowed hard, choking down the indigestible.

Vic hadn’t been well for months, but his symptoms were subtle and changeable. Puffy ankles, a lingering flu, and fatigue. He willed himself through teaching and grading papers. Not unusual for many of us, but unusual for Vic. A few weeks before seeing the oncologist, our close friend and chiropractor Dr. Fred Weiner was in town for a visit, so we set up an appointment. Fred looked startled when he palpated the lymph nodes in Vic’s groin. 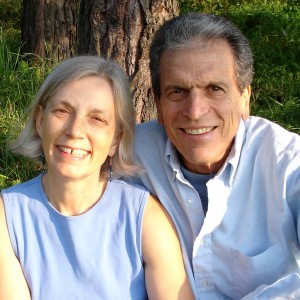 With hair and no diagnosis in 2006

“You need a sonogram immediately,” Fred said and called Vic’s internist to request it.

How long had I overlooked that subtle foreign smell on Vic’s breath? Was I smelling cancer like a dog? When did I notice it the first time? Why didn’t I know then? Would it have mattered? Why had so many doctors missed those lymph nodes or had they even been there before Fred discovered them? Even after fancy tests, it took another month to diagnosis the invader.

I bought a sturdy college-lined notebook after we talked to the oncologist, the “my husband has cancer notebook.” My life felt unreal and out of focus. I wanted to remember everything and another part of me wanted to forget and deny. Remembering won. 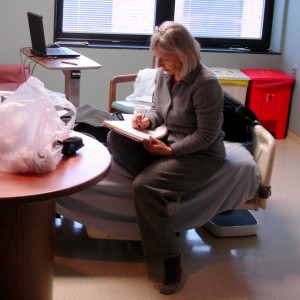 Writing in my journal in Vic’s hospital room 2007

Even though I was sixty, I’d never been in an oncologist’s waiting room or a room filled with chemotherapy stations. I had heard of bone marrow biopsies and stem cell transplants, but what were they?

The day the oncologist said the cancer word, he added this. “I think it’s lymphoma. The good thing is lymphoma can often be treated.”

Hope. I grabbed for it, but Vic coughed and blew his runny nose. His inflated ankles mocked me. He’s sick. Can’t you see? Seriously sick. Cancer sick. This is no food allergy.

I eliminated wheat, soy, nightshades, and a few other things from his diet. Just in case. I was a nutritionist. It’s what I knew how to do. 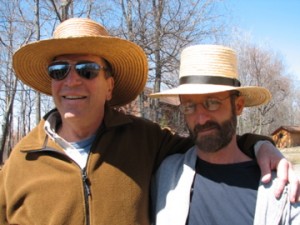 Vic in his last months with our friend Steve Smolen

The morning of the biopsy appointment, I wrote in my new journal:

“Belly fear. The wheels turn, the stream runs downhill, time moves forward. I can’t stop it and turn it back. I can’t wish away the cancer word. It’s mine. It’s ours.

“All I can do is see it through. How can I support Vic when my tears spill all over him? I can’t pretend. I can’t hide. We know each other too well.

“I’ll learn to live with fear,” I wrote. “People in Beirut, Darfur, Tibet, Afghanistan. People in refuge camps or people in violent neighborhoods know fear bigger than this. They know a fear that says you can vanish in an instant. Just like that.” 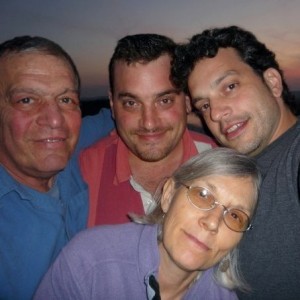 Some friends pushed the threat away with “I’m sure he’ll be all right.” How did they know that? It didn’t help to say it although I knew they meant well. Later, they would say his love would always be with me. I knew that, but I liked Vic’s body and his soul. He was a total package.

I never imagined this possibility. Not him. Not us. But then, why not us and why not him?

The cancer word changes everything.

Have you kept a written record of the good, bad, and ugly? Do you use that record in writing or self-understanding? Keeping journals during Vic’s illness was one of the best gifts I gave myself. The Ithaca Voice published an article about my practice of journal keeping in Cornell Grad Writes for Herself and Others to ‘Get through Loss’. For other another post about living with love and gratitude during cancer therapy, see Betrayal of the Body.