Honeybees and Humans: Our Sweet Interdependence 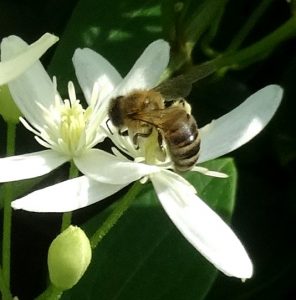 honeybee working in the clematis

“I don’t see honeybees in the Shirley Poppies this year,” I said to my son David last summer. “Bees usually love them.”

“Now that you mention it, I don’t have honeybees in my garden either,” he said. “I see bumblebees everywhere, but no honeybees.”

The next day, David contacted an old North Carolina beekeeper who sold him two supers, each with a queen, extra frames, a smoker (to encourage feeding behavior rather than defensive stinging), and beekeeping clothing for two. Gloves, bee stories, and beekeeping tips were part of the package.

David put the hives in a semi-shaded area on his land. “I won’t disturb them this year,” David said. “I just hope they make it through the winter.”

He visited the bees every day, taking a short detour on the way to and from work to watch without disturbing them.

“The bees made it,” David said early this spring. “Lots of activity. I’m sure the warm winter helped.” His witnessing may have helped, too.

In May, he removed half the honey-filled frames and left half for the bees. David contacted a beekeeper in Franklinton, NC, president of the Franklin County Beekeepers Association. 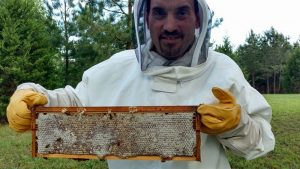 David kept visiting the bees each day. A few weeks later, he found thousands of bees outside the hives in a swarm clinging to a nearby shrub. Queens commonly produce queen eggs for the old hive in the spring before they move out with about 60% of the workers. It’s a gift if the keeper finds the swarm and gives them a new home before they fly far away. 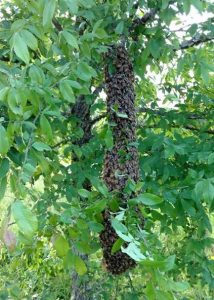 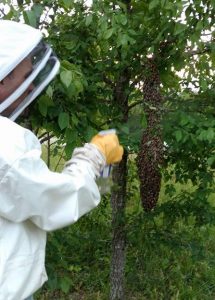 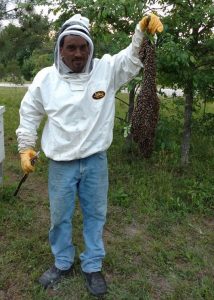 David cut the branch, lifted the swarm along with the Queen, and gently shook it into an empty hive. The bees happily entered their new home, right next to the old one. Now there were three. 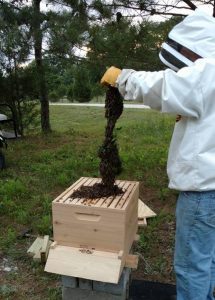 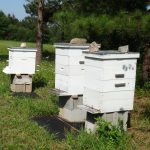 Humans have ancient associations with honeybees. Fifteen-thousand-year-old drawings of honey harvesting were found in cave paintings in France. When humans settled into agricultural lives, they learned the art of beekeeping so they could harvest honey without destroying the bees they needed to pollinate their crops.

There are Sumerian, Egyptian, Mayan, Minoan, Middle Eastern, and African images of beekeeping. Many ancient cultures had honeybee goddesses and gods, and bee tending was associated with temples or royalty. Their sweet products were nutritionally and medicinally essentially and good for making mead. Their wax provided candles and seals.

In many mythologies, bees are associated with prophecy and eloquence, regeneration and rebirth. Honeybees communicate subtle information to help the hive thrive through dance, a skill we humans could use. 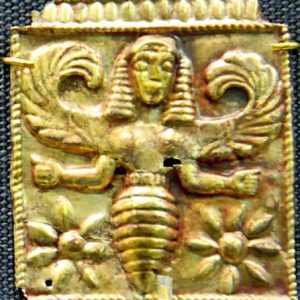 We need honeybees to pollinate fruits, vegetables, and nuts. As most of us know, modern industrial agricultural practices put bees at grave risk by eliminating their food sources and habitat. They’re also weakened by pesticides and disease. Organizations such as Save Honey Bees make it easy to participate in protecting them.

The day before I left, David arranged to buy a new Queen from the honey lady of Franklinton. I was the expedition photographer for setting up the fourth bee hive. I’ll write about that magical experience next week.

Have you kept bees or been around someone who does? Now I understand why beekeepers are passionate about their hives and broken-hearted when a hive fails or collapses. For other posts about my relationship to nature and gardening, see Bees, Butterflies, and Blessings: Cycles of Nature and Grief. For another post about honeybees, see The Queen Bee and the Honey Crone.