Teaching Tibet: Compassion and Mortality in a College Classroom 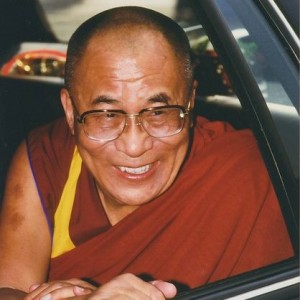 “I’ll teach this Tibet class as long as I can,” Vic said after meeting his enthusiastic students for the first class of the semester in 2007. “I love teaching these kids.”

Although Vic was a physic’s professor, he’d also taught a popular class on Tibet for twenty-five years. That fall, while Vic went through cancer treatment, the class met for three hours once a week. We’d moved full time to our land in the Finger Lakes, two hours from Colgate University. Keeping this class going involved commuting, but Vic was confident he could pull it off.

For three weeks in September, Vic drove to Colgate weekly and returned late with joyful stories. He had felt well all summer, but hadn’t been this happy since his cancer diagnosis a year before.

The fourth week, he arrived home with a blotchy red rash on his thighs. Within days, there were worse symptoms, including heart arrhythmia. One night I took him to the hospital where he suffered twelve cardiac arrests. Yes, twelve. Doctors couldn’t explain what was going on, but one thing was clear. Cancer had returned.

While Vic was on life support, the Dalai Lama visited Ithaca. This had been planned for months and Vic had arranged for his class to see His Holiness at Ithaca College. Our friend Steve offered to shepherd Vic’s class through the events. Every student showed up. 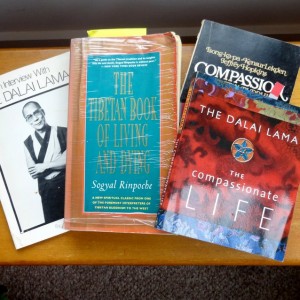 The next week, Vic was off life support but still in the hospital, so I canceled the Tibet class. When Vic hadn’t been released the third week, he asked me to teach the class. I couldn’t say no. I was too drained to have stage fright, and there was little time to read the assigned reading from The Tibetan Book of Living and Dying. Fortunately, I’d studied the book years before. I’d also learned something about the topic in our last year in Cancerland.

“How is Professor Mansfield?” the students asked when I showed up. “How is Vic? We’re worried about him.” They gathered around me with eager faces.

“It’s a miracle he’s alive,” I said, “but I think he’ll survive. Doctors don’t understand what happened.” Then we talked about living and dying all afternoon. 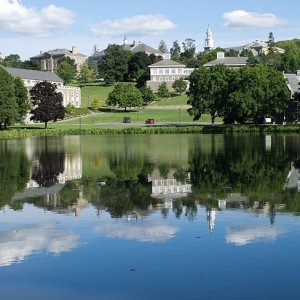 Vic was released from the hospital, frail and feverish, but determined to finish his class. Friends drove him to Colgate two weeks in a row, but when they brought him home, he was too exhausted to get out of the car.

Each week, I put a mattress in the back of our station wagon so he could rest during the drive. Each week, I parked in handicapped parking and slowly walked him to class, carrying his briefcase. While the students watched wide-eyed, I helped Vic remove his winter boots and slipped his swollen feet into slippers. I took his coat off and draped it over his hunched shoulders. 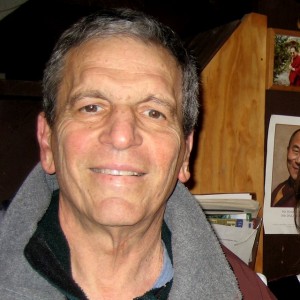 Vic in his last year

Each week, students gave half-hour presentations based on their research topic. The rest of the afternoon, I led them through the readings and discussions.

Vic was quiet, but when he joined the conversation, the students soaked in his raspy words. He talked about cancer and the lessons of suffering. He talked about mortality, his and theirs. He somehow read and graded student papers between weekly classes.

“This is the most transforming class I’ve ever taken,” the students said repeatedly during the last class of the semester. “My life is changed forever,” one young man said in tears.

Vic and I had taught them the Dalai Lama’s central teachings: we all suffer and the best medicine is kindness. We believed in what we taught. Vic was living proof.

Have you had to push beyond your comfort zone to help a dying person fulfill their last wish? The Dalai Lama was one of our spiritual teachers after we met him in 1979 and he wrote the introduction to Vic’s last book, Tibetan Buddhism and Modern Physics: Toward A Union of Love and Knowledge. If you’d like to know more about our relationship with him, you’ll like Permeated with Peace (1989) and Zapped by the Dalai Lama.