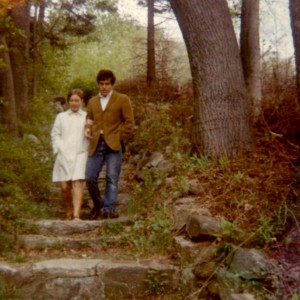 “What did you do before you came to Cornell?” I asked. We sat on his couch, drank red wine, and listened to Buffy St. Marie on the stereo. He was sturdy and muscular with dark curls. My heart had decided the minute I met him. It was 1966, and I was in love.

“I went to Dartmouth as an undergraduate,” he said. “I got a master’s there.”

He hesitated. I could tell he didn’t want to talk about before that.

“Ummm, I lived in Norwalk, Connecticut,” he said. His lips barely moved. 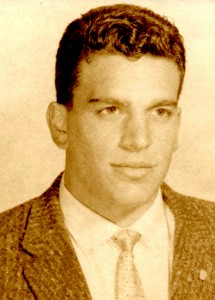 “Where was your father?” I asked.

“He died,” Vic said. His jaw muscle popped, and he dropped eye contact.

“My dad died when I was fourteen,” I said probing for more, but the topic was closed. I came to know that tight jaw well. It meant I was hitting a raw nerve or he was afraid.

That winter, we went to classes in the morning and spent afternoons making love and eating Golden Delicious apples. We cooked, shopped, and did our laundry on the weekends. I wanted to move in permanently, but he wouldn’t commit. I was 21 and wanted his arms, his voice, and our passion all the time.

“There’s something I have to tell you,” he said a few months later. His dark brown eyes were soft and earnest, but that jaw was tight. My heart pounded. Did he have another girlfriend or was he leaving for some reason? He was skittish. I wanted to circle him with love without scaring him away.

“My dad didn’t die,” he said. He forced himself to look at me. 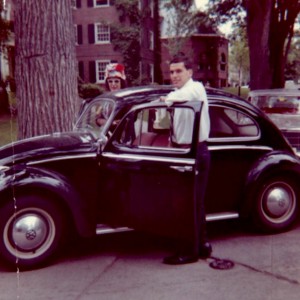 Vic’s mom and his graduation gift

“He deserted my mother and me before I was a year old.”

“I saw him a few times in my life,” Vic said. “He was an alcoholic and didn’t pay child support. When he showed up, he was violent.”

He reached for my hand.

“It’s embarrassing. He’s still alive, but I don’t know where he is. I haven’t seen him in fifteen years. His real name wasn’t Mansfield. He’d changed it before my mother met him. I’m all Italian.”

I hadn’t questioned his story. I didn’t care about his past. I was in love with a physics graduate student who rode a motorcycle and read me poetry. I loved his arms, his hungry kisses, and his black VW. Later, I realized he had revealed the wound that haunted him, his life-defining secret. Telling the truth meant he trusted me with the places that hurt. 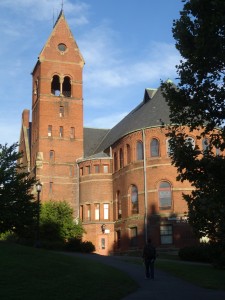 There was mystery behind the man, hidden corners and silent secrets. Sometimes the most fascinating thing about someone is the part they try to hide.

Did your lover have a secret you learned about later? Did you find out by mistake or did s(he) tell you? For other true tales of my early relationship with Vic, read Until It’s Time for You to Go or California Hippie Capers: 1968.