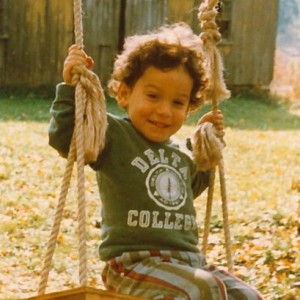 “What’s your daddy like?” a saucy saleswoman asked curly-topped David.

“My daddy’s tough as nails,” David said with all the bravado he could muster.

“My mama talks back.”

Our marriage was usually harmonious, but we knew how to have a fair fight to move things forward and avoid permanent damage. Even during Vic’s illness, we sparred occasionally as we became exhausted by the constant crises of lymphoma.

During one period, Vic depended on Tylenol to prevent high fevers, but he repeatedly forgot to take it. Forgetting led to a 104 fever in the evening while I witnessed his distress and scrambled to lessen his symptoms. To prevent this nightmare, I put a Tylenol bottle on the kitchen counter next to his pill box. Beside the bottle, I put an open note pad so he could write down the time and amount of Tylenol he’d taken. He remembered the dose in the morning when he took his other medication, but then he forgot. His lapse was related to the mental effect of other medicines, but mostly it was his resistance to taking more drugs and his desire to think about other things besides cancer. He refused to set a timer as a reminder. 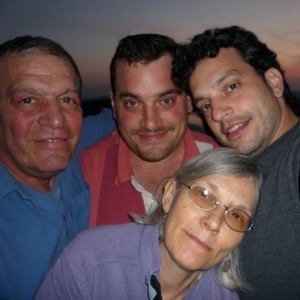 Vic, David, Anthony, and me–6 weeks before Vic’s death

“You need the Tylenol, Vic. You can’t expect me to follow you around all day to make sure you take it,” I said one afternoon, choking back a sob.

“Well, I forget,” he said defiantly.

“You need to figure this out,” I growled. I didn’t want to spend another night covering his body with heating pads, hot water bottles, and down comforters while he shook violently with fever rigors, his teeth audibly chattering. I didn’t want to run for the Tylenol and watch the clock, waiting for the drug to take effect and shivers to turn to sweats.

“You don’t have a choice,” I ordered. “Take it and write it down.” Tears of anger flowed down my face.

“You’re a cry baby,” he snapped, one of the few times in forty-two years that he targeted my tears.

“OK, I’m a cry baby,” I roared like a poked bull, “but you’d better take the damned Tylenol or you can shiver alone tonight.”

Within an hour, we calmed down and made a plan. Next morning, I put a little bowl on the counter and dropped in 8 Tylenol, the amount he needed each day. On the notepad, he wrote morning, noon, afternoon, and evening. All he had to do was make a mark after taking the pill, and if he forgot a dose, we could tell by the number of pills left in the bowl.

He remembered. The fevers were controlled. We forgave the growls. The flare-up brought more consciousness to the issue and a resolution.

This often happened in our marriage. A flare, angry words, a compromise, and a plan. We rarely hit below the belt or flattened each other’s ego.  We knew that anger was a sign of an unconscious issue that needed attention. We struck out and yielded, resolved and forgave.

When Vic died, I lost a lover, partner, friend, and companion, but also my sparring partner. Who will put up with me now when I’m angry about something trivial? Who will talk it out when wrongly accused so we can become conscious of what’s underneath? Who will put up with what Vic called the lightning rod effect–a jab of misplaced anger over disappointment or defeat that had little or nothing to do with the person receiving the jolt?

“I married a worthy opponent,” Vic often said with a grin.

For another post about essential marriage skills, see The Art of Argument. Another strategy is avoidance or changing the subject. It sometimes worked for us as we got older and better at laughing at ourselves. What works for you?